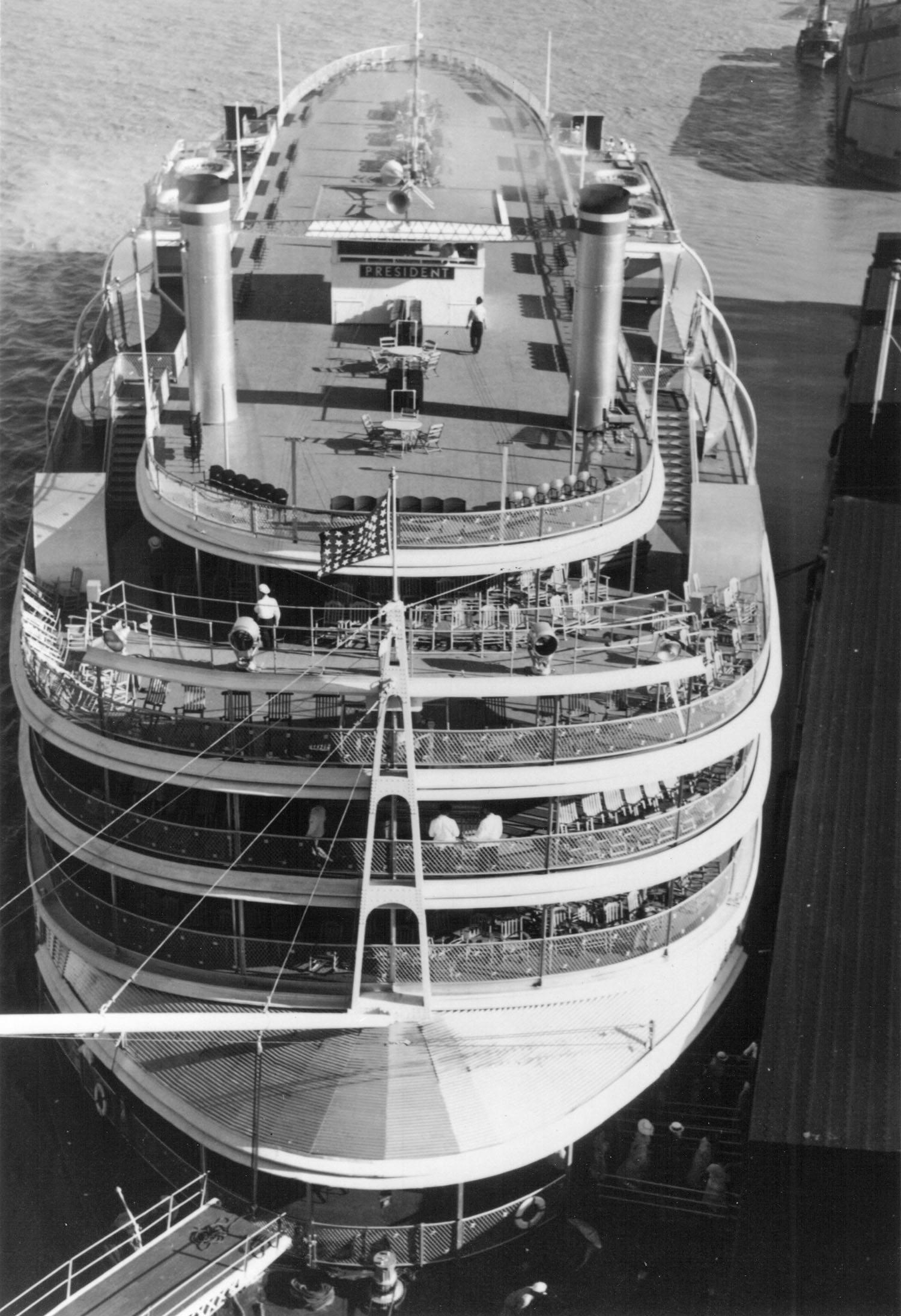 Taken 80 years ago, this week’s image for the Old Boat Column features the sidewheeler President.

Originally built in 1924 for the Louisville & Cincinnati Packet Company as the Cincinnati, the steel hull, measuring 291 feet long by 84 feet wide, was constructed at Midland, Pa., with completion at Cincinnati. An identical hull was built concurrently as a sister vessel to be named Louisville. However, due to a change in plans, the hull was sold to the Coney Island Company at Cincinnati to become the second excursion steamer Island Queen.

The problems caused by the Great Depression in the early 1930s brought about the sale of the Cincinnati to Streckfus Steamers in 1933. The new owners rebuilt the vessel with a new superstructure for use as an excursion boat. The work was carried out at the St. Louis levee while curious citizens watched as the big steamboat took shape. In its February 4, 1933 issue, The Waterways Journal carried an article that proclaimed: “The Democrats will soon present us with a new president (Franklin Delano Roosevelt) and, not to be outdone, Streckfus Steamers will soon do the very same thing.”

The six oil-burning boilers which provided steam to the compound non-condensing Barnes engines (9-foot stroke) were relocated to the hull. Touted by the media as a “Super Steamer,” the President made its trial trip on July 1, 1934, with more than 1,000 dignitaries aboard, including St. Louis Mayor Bernard Dickmann and representatives from The Waterways Journal. The riverboat was in command of Capt. John Streckfus, with Capt. Jim Brasher as pilot. Capt. Cornelius McGee was mate and Frank Moore presided as chief engineer.

Making its debut to the public on July 4, the President replaced the Streckfus sidewheelers J.S. and Saint Paul (later renamed Senator) which began tramping the Ohio River.

The five-deck President was certified to carry 3,100 passengers and was notable for its “special refinements,” such as rainbow shadow-box lighting effects in the main salon and the ladies’ powder rooms, which were reportedly the epitome of elegance and modernity. With a nod to the past, a steam calliope (formerly used on the sidewheeler J.S.) was installed just forward of the port smokestack.

During the winter months, the President was taken to New Orleans; in 1944, the decks were enclosed with glass. When Streckfus brought out the steamer Admiral at St. Louis in 1940, the President remained at New Orleans with occasional journeys to the Upper Mississippi River.

In 1978, the steam propulsion of the President was replaced by three Murray-Tregurtha diesel units rated at 2,000 hp. The boat was sold in early 1981 to the New Orleans Steamboat Company, operators of the sternwheel excursion steamboat Natchez (designed by Capt. Alan Bates) which began operating in 1975.

The President was sold a decade later to St. Louis River Cruises Inc., and returned to its original home port to run public and charter cruises. The riverboat made a special foray to the Ohio River in 1988 to participate in the first Tall Stacks festival at Cincinnati.

Following a career as a casino at Davenport, Iowa, the President was retired in 1999. During the winter of 2009, the vessel was disassembled and 300+ large pieces moved to a site at St. Elmo, Ill. Plans to rebuild the riverboat into a land-based tourist attraction and shopping center never came to fruition.

Caption for photo: The steamer President, seen from the Eads Bridge at St. Louis, in 1939. (Keith Norrington collection)