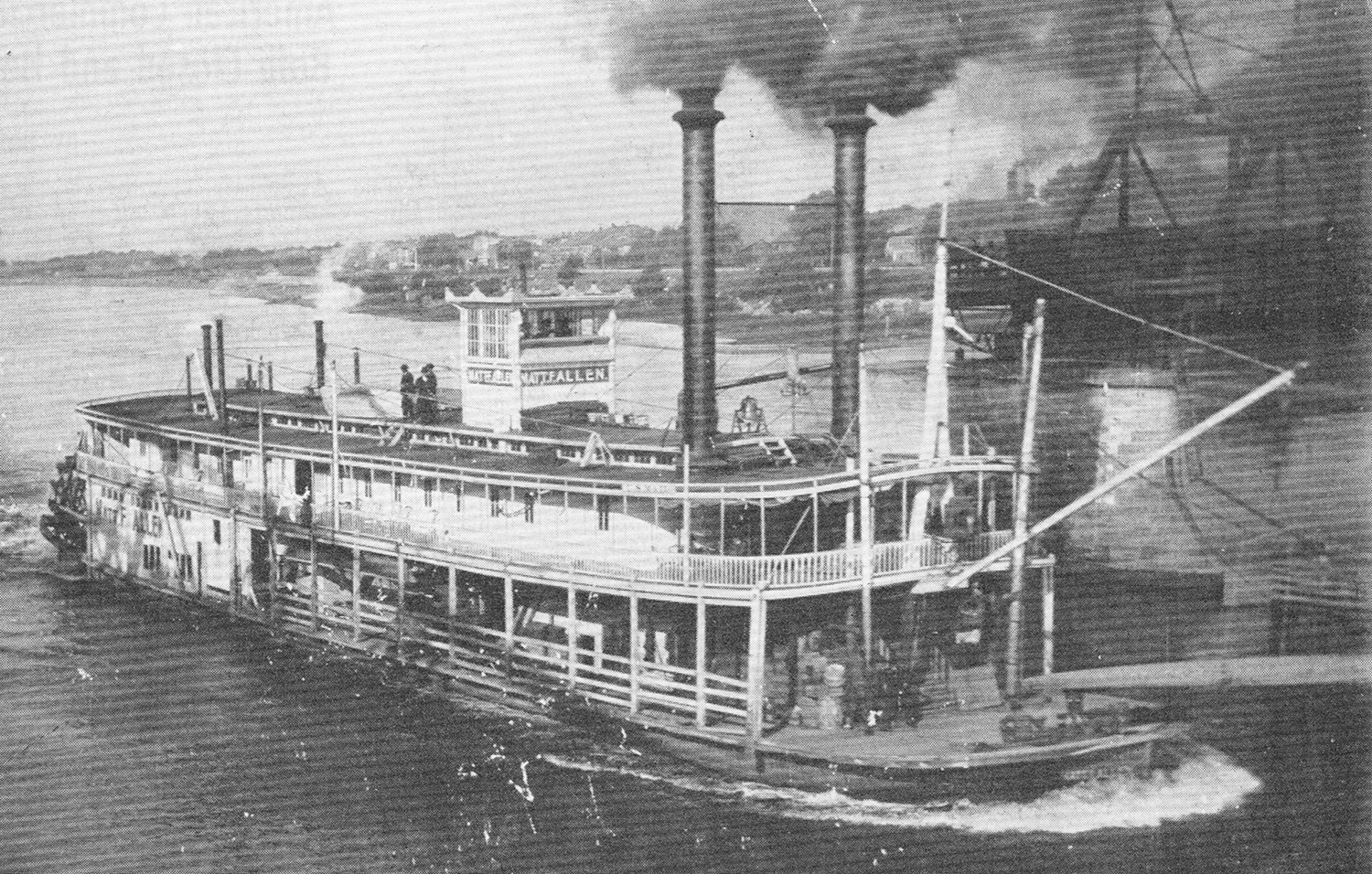 Built in 1887 for a contract cost of $5,800, the packet Matt F. Allen was a product of the Howard Shipyard at Jeffersonville, Ind.
Constructed on a wooden hull measuring 149.5 feet in length by 28.3 feet in width, the sternwheeler was built for the Cumberland River trade. Originally owned by the Lovell Line, it ran in the Nashville-Burnside trade.

Purchased by Capt. Harry Kraft and other investors in 1891, the vessel was taken to the upper Ohio River to run between Pittsburgh and Wheeling, W.Va.

Legend has it that the Allen came close to being purchased in 1890 by Capt. Gordon C. Greene to become the first vessel of Greene Line Steamers. The 28-year-old captain had gone to Nashville where the H.K. Bedford and Matt F. Allen were available for the same price. Greene asked an elderly man on the wharf what he would do if faced with the decision of which steamboat to buy. The man replied: “Captain, the Allen might be a bit more elegant, but the Bedford comes and goes and doesn’t have that big coal pile.” Greene bought the “come and go” boat and the Greene Line was born.

In the spring of 1896, the Allen was sold to Capt. Walter Blair, who took it to the Upper Mississippi for the Carnival City Packet Company. The name was changed to Carrier and the home port was listed as Rock Island, Ill, until 1898, when it was again changed in the records to St. Louis. Capt. Blair operated the boat out of Davenport, Iowa, along with the packet Wm. J. Young, Jr.

In the spring of 1900 the steamboat ran in the St. Louis-Calhoun County trade, under the command of Capt. Ed D. Young with Gus Block as head clerk.

The riverboat reportedly had a good safety record until 1899 when, on May 18, while at Martins Landing, Ill., a deck passenger fell overboard and drowned. On the following July 2, while descending the Mississippi River at Hamburg, Ill., a passenger committed suicide by jumping into the river. The next month, on August 7, while loading a barge at Calhoun Landing, Ill., John Dugan, a roustabout, fell overboard and was pulled under the barge, never to be seen again. On October 4, passenger Nick Kaelin, said to be in an intoxicated state, walked overboard and drowned at the mouth of the Missouri River.

Some 119 years ago this week, on September 21, 1900, the Carrier was totally destroyed by fire at the St. Louis levee. All passengers and crew were safely evacuated with loss of the boat listed at $7,000; freight loss was estimated at $1,500. The sidewheel steamer War Eagle, of the Eagle Packet Company, was moored alongside and reportedly the origin of the blaze.

The presentation by Capt. Matt “Bubba” Dow is entitled “Way Down Yonder in New Orleans: The Journey of Our Beautiful Queen.” This program will be a multi-media presentation on the trials and tribulations of renovating an old casino boat into an excursion boat, the City of New Orleans. Admission to the program benefits the museum operating fund and is $5 per person.