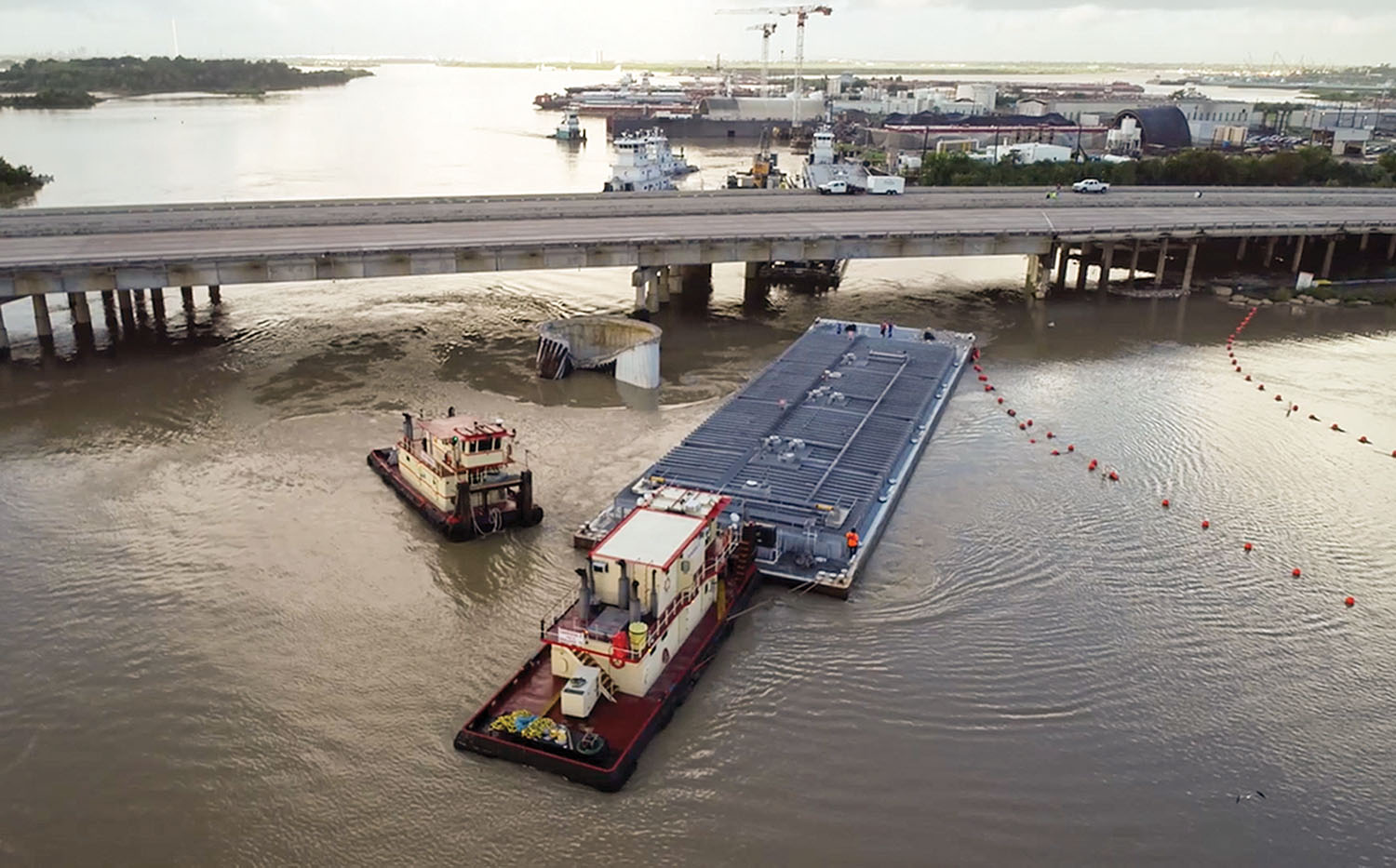 Around midnight September 20, following torrential rain dropped in the Houston area by the remnants of Tropical Storm Imelda, nine barges broke away from their moorings at San Jacinto River Fleet, located just north of the I-10 bridge over the San Jacinto River in Channelview, Texas.

Two of those barges, carried by swift currents in the San Jacinto River, struck and became lodged underneath the I-10 bridge, causing visible damage to at least two piers supporting the westbound bridge span. The impact led to the immediate closure of all lanes on the I-10 freeway over the San Jacinto River, as well as the waterway itself.

“Several barges have impacted the bridges at this location,” the Houston District of the Texas Department of Transportation (TxDOT) tweeted shortly before 4 a.m. on September 20. “This is a developing situation that is further enhanced by the river rising.”

The swift current in the San Jacinto River hampered bridge inspection efforts and barge assessment and salvage operations well into the day September 20. By that afternoon, assessments were underway and the U.S. Coast Guard had formed a Unified Command, which also included TxDOT, Texas General Land Office and Canal Barge Company, the owner of the two barges that struck the bridge.

The scene throughout much of the Houston area and eastward to Beaumont and even into Southwest Louisiana was reminiscent of the aftermath of Hurricane Harvey in 2017. Some parts of the Houston area reported more than 40 inches of rain over a three-day period due to the remnants of Tropical Storm Imelda.

At the time of the incident, the two barges that allided with the I-10 bridge were loaded with naptha and monoethylene glycol. Of the other seven barges that broke away, Ingram Barge Company owns six and Canal Barge Company owns one. The Ingram barges were promptly recaptured and returned to a fleeting area by the afternoon of September 20, though the third barge, owned by Canal Barge Company, remained grounded north of the I-10 bridge at an EPA Superfund site.

By the afternoon of September 22, the Coast Guard announced that the two barges lodged underneath the interstate had been removed.

“This was a very complex operation that was completed with no pollution or injuries to responders,” said Cmdr. Nicole Rodriguez, the coordinator for the response. “I’d like to thank our state, local and response partners who helped ensure the success of the removal.”

According to the Coast Guard, there was no environmental impact from the breakaways.

“Clearly, this operation will not be over until the waterway is fully cleared, the bridge is restored and I-10 is fully operational, but we are on our way to securing that outcome,” said Lt. Cmdr. Tim Tilghman, the federal on-scene coordinator for the response.

By September 24, commercial navigation had been restored with restrictions. The Coast Guard Captain of the Port established a safety zone extending to both sides of the I-10 bridge over the San Jacinto River. At that time, vessel traffic through the safety zone was restricted to light boats and single-barge tows transiting during daylight hours only. Vessels were not allowed to meet or overtake one another, and crews had to check in and out with Vessel Traffic Service Houston-Galveston at least 15 minutes before transiting the safety zone.

“We are very thankful for the great work of the TxDOT project team and our contractors in getting traffic moving again on the I-10 corridor in east Harris County,” Quincy Allen, TxDOT Houston District Engineer, said in a statement. “We also want to express our deepest gratitude to the impacted communities for their patience and willingness to work with us as we worked as quickly as possible, with safety being our highest priority, to restore traffic.”

TxDOT is now working to mobilize materials and equipment to allow placement of temporary support beams under the westbound span. The agency is working on engineering and design plans for permanent repairs to the westbound bridge. That timeline is yet to be determined.

Caption for photo: Screen capture from Coast Guard drone video of the removal of the second barge from the I-10 bridge.