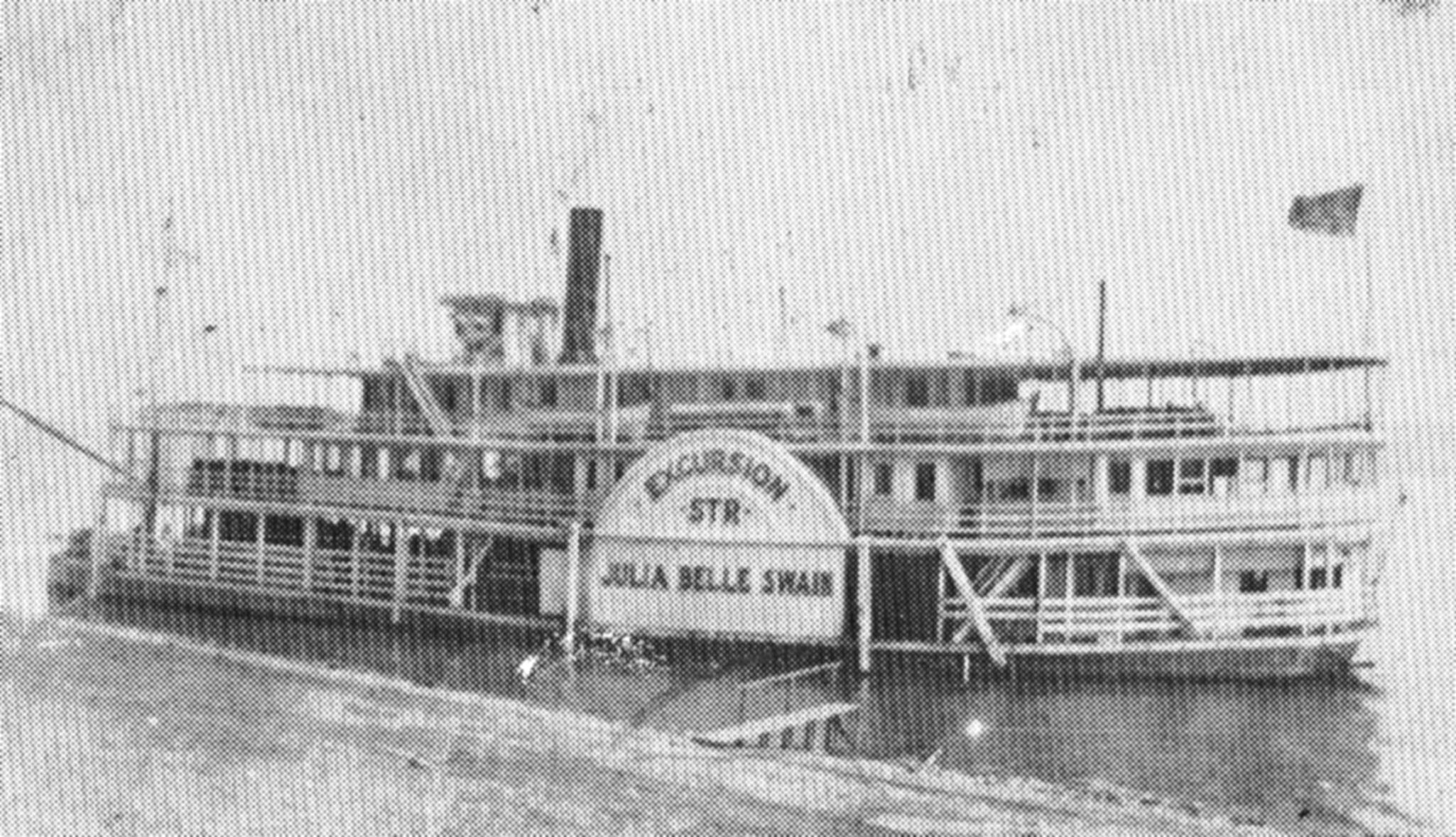 Built in 1913 at Santa Rosa, Fla., the unique sidewheeler Julia Belle Swain was originally the Charles E. Cessna, named for a Chicago physician.

The riverboat was designed to run between Pensacola, Fla., and Mobile, Ala. Constructed on a wooden hull measuring 169 feet in length by 34.4 feet in width, the vessel contained compound oscillating engines (cylinders of 12 and 24 inches with a 7-foot stroke) made by Swain. The Swain family, which was involved in the construction, repossessed the steamboat (listed as both packet and excursion vessel) at New Orleans in the autumn of 1916 and took it to La Salle, Ill.

Completely renovated and renamed Julia Belle Swain, it began excursion work on the Illinois River in 1917 under the command of Capt. David Swain. This would be the last steamboat owned by the Swain family.

In 1918, 1919, and 1920, the riverboat was under charter to the Eagle Packet Company, operating between Alton and St. Louis, replacing the Spread Eagle, which was lost in the 1918 ice gorge at Paducah. In 1921 into early 1924, the boat operated in the Illinois River trade, with Capt. Verne Swain as master and Capt. Tom Parker as pilot.

In May of 1924, Edward Cody, of Peoria, and Oscar Moore, a former purser of the Eagle Packet Company, purchased the boat and formed the Penn Excursion Company. The new owners took the vessel to Pittsburgh; Capts. Percy and Verne Swain made the trip with Capt. Albert Martin, the upper Ohio pilot. The Julia Belle arrived at Pittsburgh with the original signboards reading “Pensacola–Mobile” still on the forecastle.

The boat’s operation at Pittsburgh was never a great success, although it continued to run each season into the 1930s. The crew included Capt. Buck Muller, master; Capt. Joseph McLaughlin, pilot; Harry Clain, engineer; James Costello, mate; and Mrs. Oscar Moore, cashier. Eventually, the company was taken over by the Second National Bank of Pittsburgh, which reorganized and renamed the business the Penn Transport Company. Oscar Moore was president, Edward Cody, vice president and Edgar Eaton, secretary and treasurer. Howard Morris, one of the original clerks of the big excursion steamer Homer Smith, was appointed manager. The boat was twice offered for sale in The Waterways Journal, in April of 1928 and again in November 1930.

While in the Pittsburgh area, the Julia Belle operated excursions down the Ohio and up the Allegheny and Monongahela rivers. During 1927, the vessel went to Fairmont, the head of navigation on the Monongahela, with Capt. Joe McLaughlin at the wheel.

At the conclusion of the 1931 season, the riverboat was laid up near the mouth of the Monongahela. On December 2, while inspecting the boat, manager Howard Morris, looking out from the texas, saw smoke emanating from the galley and boiler room. Rushing into the galley, he poured two small barrels of water onto the flames, but was unsuccessful in extinguishing the rapidly spreading blaze. Driven back by the conflagration, Morris reportedly was forced to jump overboard and swim ashore, where he sounded the alarm. The Julia Belle Swain burned to the waterline and was a total loss.