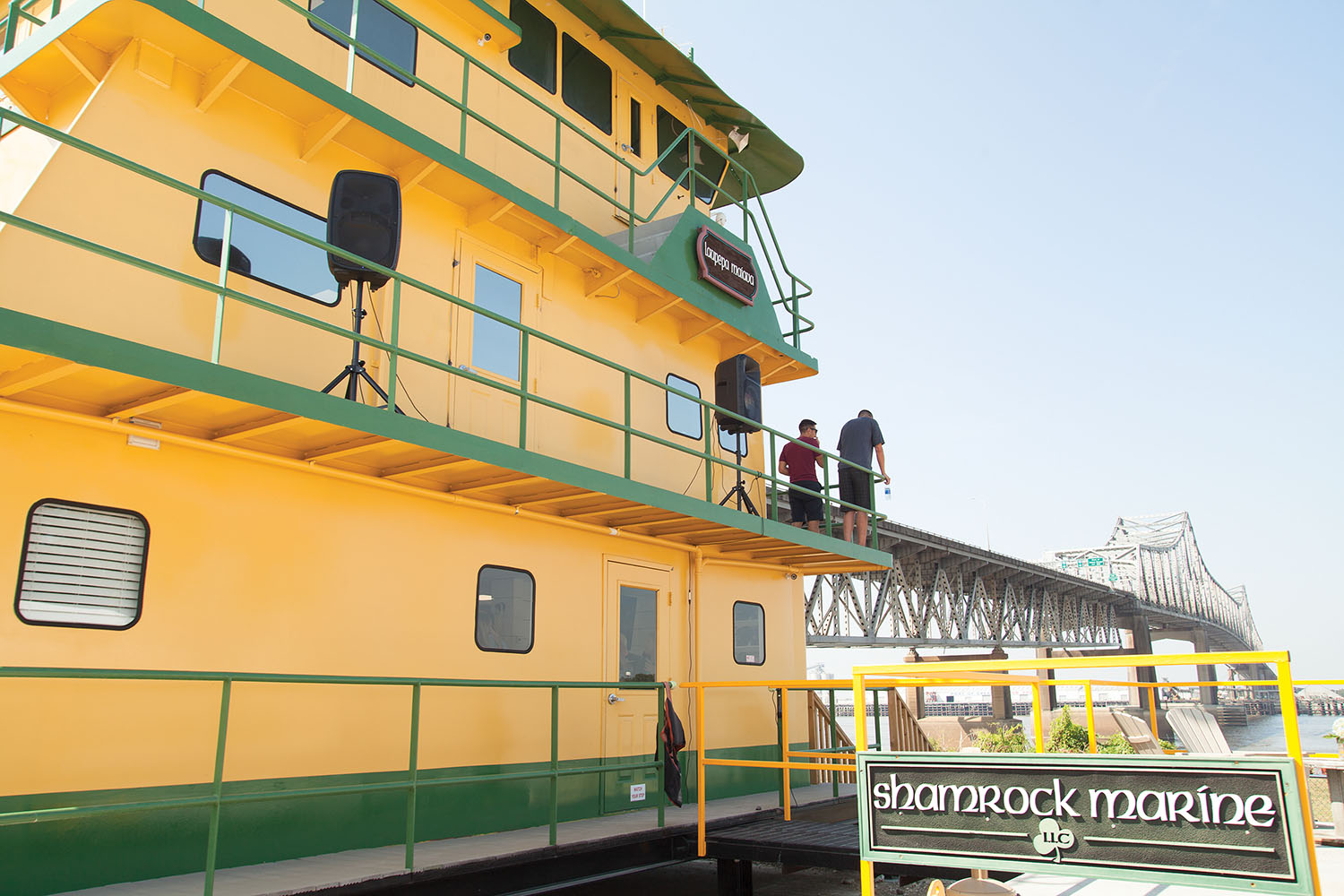 Oftentimes over the lifespan of a towboat, a new company will come along and buy, refurbish and rename the boat. Anyone who lives and breathes the maritime industry knows it’s not unusual for a boat to be rechristened multiple times during its many years of service.

But earlier this month, a 53-year-old towing vessel experienced what could be a first-of-its-kind rechristening when the mv. Rhonda, built in 1966 at Main Iron Works in Houma, La., was renamed the Laupepa Maiava.

The christening ceremony took place October 4 on the east bank batture of the Mississippi River in Baton Rouge, La., at Shamrock Marine LLC’s Mile 230 dock. Shamrock Marine, co-owned by founder Duncan Armentor and Vic Calvaruso, provides warehousing and vessel transport of groceries, supplies, filters, palletized cargoes and personnel to towboats and ships midstream on the Mississippi River in Southeast Louisiana and in Channelview, Texas. Besides the Mile 230 dock, the company also operates a shoreside warehouse in Baton Rouge, a dock in Carville, La., and a warehouse on the San Jacinto River in Channelview.

On Friday, October 4, members of the Shamrock Marine team gathered on the batture near the Baton Rouge dock to celebrate the christening of the Laupepa Maiava, the company’s new “wheelhouse office.” The office, built from the salvaged wheelhouse of the mv. Rhonda, is named for Shamrock Marine’s director of operations Laupepa “Junior” Maiava.

Armentor recounted to the crowd gathered for the christening how he met Maiava not long after he’d founded the company in 2004.

“Junior came up to me and said he was interested in a job,” Armentor said. “We had one boat when we started. We had no power. We had no running water. We had nothing, really.”

Armentor asked if Maiava would be willing to clean the company’s barge-mounted crane. Maiava agreed, and Armentor was astonished at his diligence throughout the day.

“Junior made a makeshift bucket and line, threw that line in the river, scooped out a pail of water,” Armentor recalled. “With a little Dove soap and a rag, he scrubbed that crane ’til the sun went down. Junior never came up to me and asked for a break, never said we didn’t have the right equipment, never complained. Junior was just Junior. He just did it.”

Needless to say, Armentor hired Maiava, and their relationship took off.

“I’d call him in the middle of the night when the boat would break,” Armentor said. “Junior would go out there with me. We had no clue what we were doing, but we’d figure it out.”

Maiava, a native of Samoa, went on to earn his captain’s license—and his U.S. citizenship in the process—and captained one of Shamrock’s vessels. In his 15 years with the company, Maiava has done everything.

“As we grew, Junior grew with us, taking on every role we perform, from warehousing to trucking, filter pulling, running the boats, pulling a starter, pulling a battery,” Armentor said. “There is no job Junior won’t accept. The role became bigger, Junior accepted the port captain’s role, and ran it flawlessly. Today, Junior stands before you as director of operations and runs the entire company. I am honored and blessed to congratulate and celebrate Junior’s hard work with the christening of this office, the Laupepa Maiava.”

As Armentor addressed the crowd, Maiava stood just to the side, with both men wiping away tears as they celebrated 15 years of friendship. Many members of Maiava’s family were also an hand to share in the celebration. His brother, Muipu Maiava, flew in from Samoa, while his cousins Pele, Brian and Jeanna, and their children, traveled from the Carolinas.

Armentor made sure to thank colleagues in the maritime industry who have helped Shamrock Marine become a success, including Sonny Banta, who allowed Armentor to moor his first dock at the old Banta Fleet, and the late Perry Verret. He also expressed his thanks for Maiava’s parents.

“I want to thank Junior’s mother and father,” Armentor said. “Although they’re not here and we weren’t able to pull this off before, I know they’re looking upon Junior and are very proud.

“This is a big day, and I’m very proud to call Junior my friend,” he added.

Rev. Thomas Rhoades, river chaplain with the Seaman’s Church Institute, presented Maiava with a flag of the U.S. Merchant Marine and a ship’s Bible, just as he would at a vessel christening.

After reading two passages of the Bible, Rhoades offered a prayer for the Armentor, Maiava and Shamrock families, asking also for the office to be a haven for mariners.

Maiava then crashed a bottle of champagne over the railing of the wheelhouse office, officially christening it for its new service as part of Shamrock Marine.

Bayou Machine & Fabrication on the Harvey Canal in New Orleans, La., along with Stewart Construction, fabricated the main deck for the Laupepa Maiava. The team then placed the historic wheelhouse atop the newly-fabricated main deck. Afterward, the structure was moved to Baton Rouge, but high water delayed placement on the batture. Once the wheelhouse was placed on the batture, it was built out and furnished in situ.

The lower deck features a dispatch area plus retail and lounge space for crews awaiting transport.

The second deck houses corporate offices and a bathroom. Astern on the third deck is a conference room named Mr. P after the late Perry Verret, which features a magnificent wheel table he had built that seats five. Armentor salvaged some of the wheelhouse controls and others were donated. Crescent Towing donated the throttles off the mv. Port Hudson. Shamrock had them rebuilt and then installed them in the dash with working air. When engaged, they hiss and click just like the rest. M&P Barge Line donated the old working Furuno radar which adds to the realist experience.

Windows are shaded, and the pilothouse now is equipped with projectors that play a time lapse video of a tow moving on the river. Armentor said he plans to welcome school field trips at least once a week in order to introduce children to the maritime industry.

“If we inspire just one kid to go on to work on this river, it’ll all be worth it,” Armentor said.

For more photos from the ceremony, see the slideshow below. 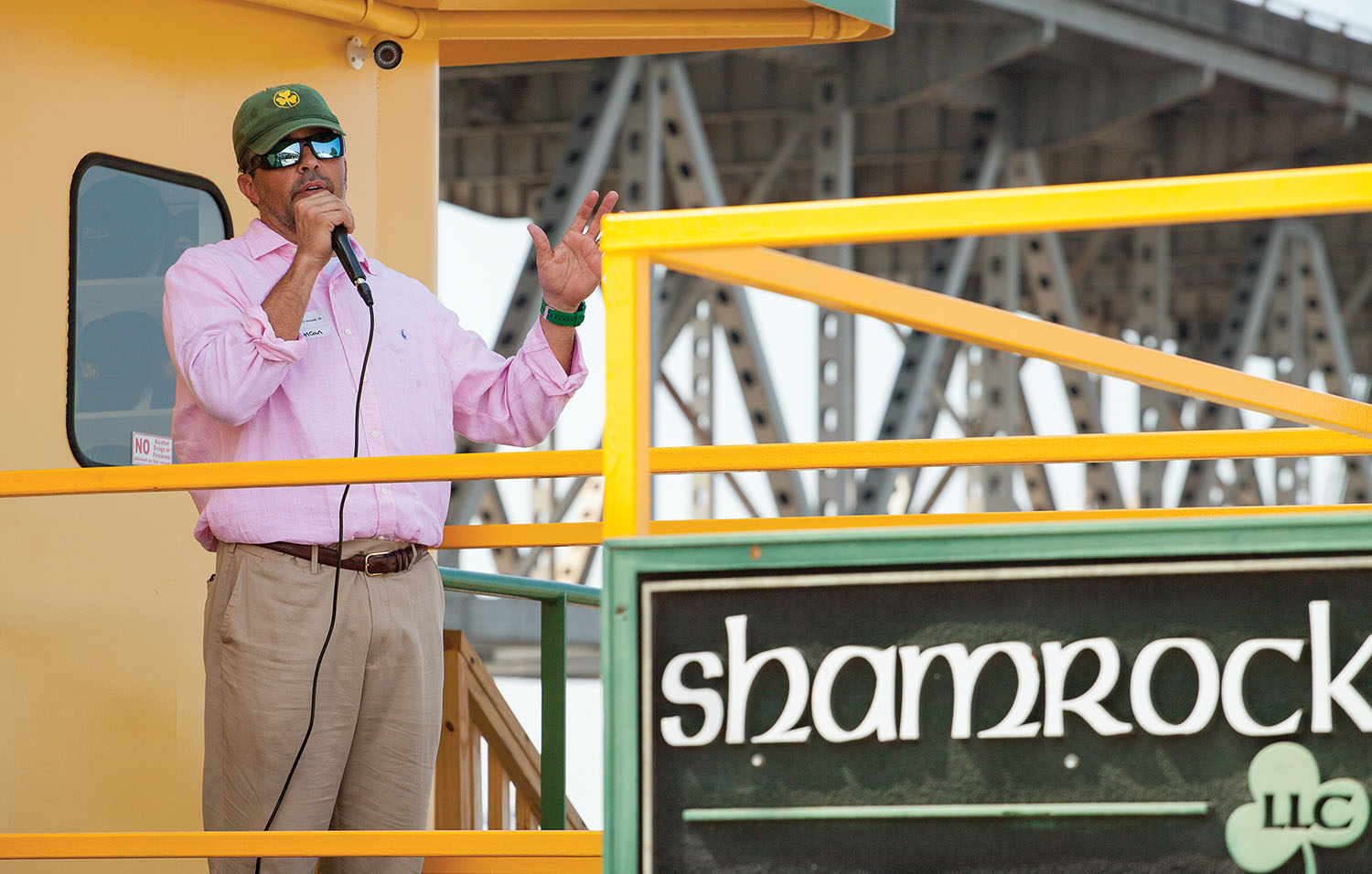 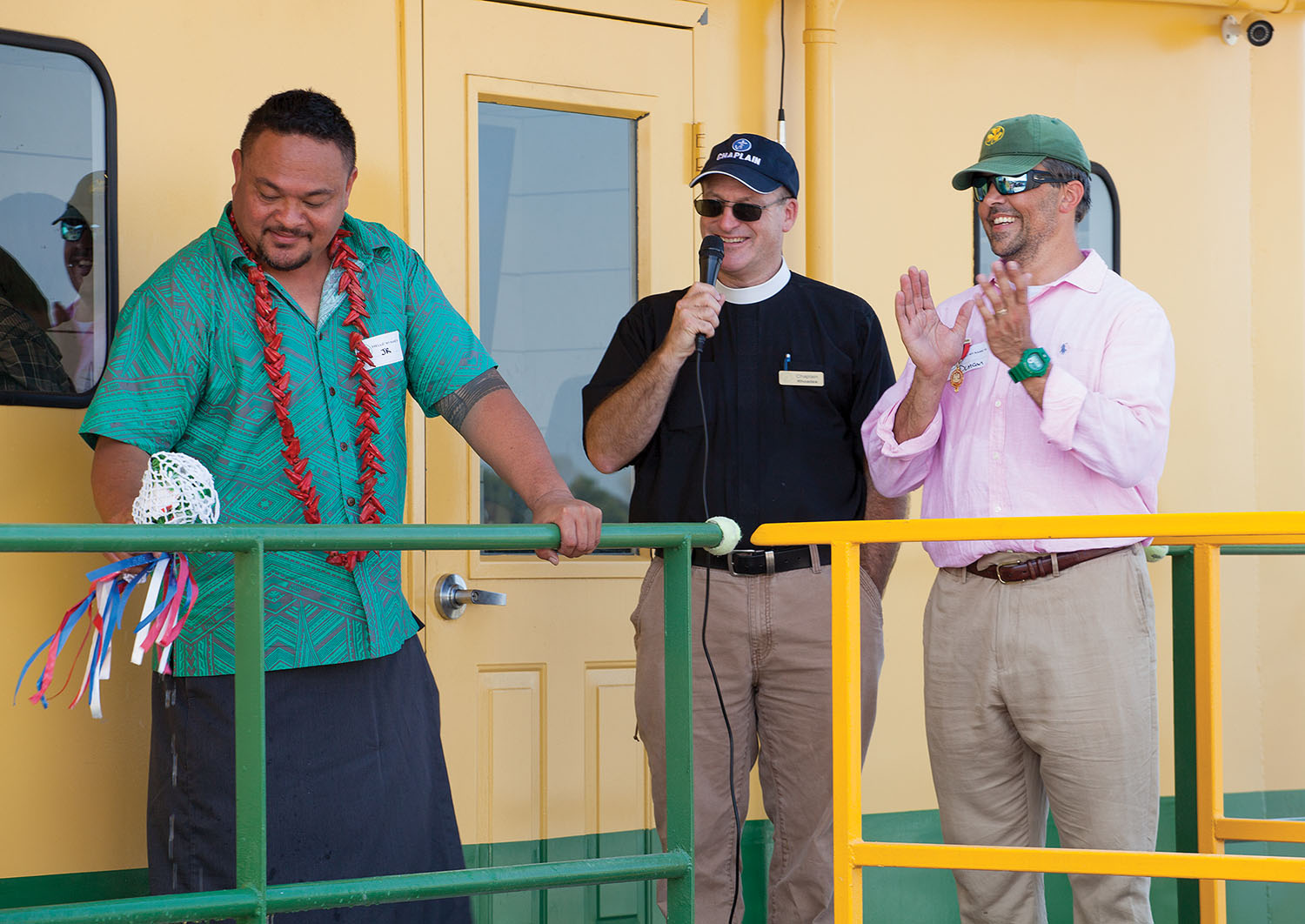 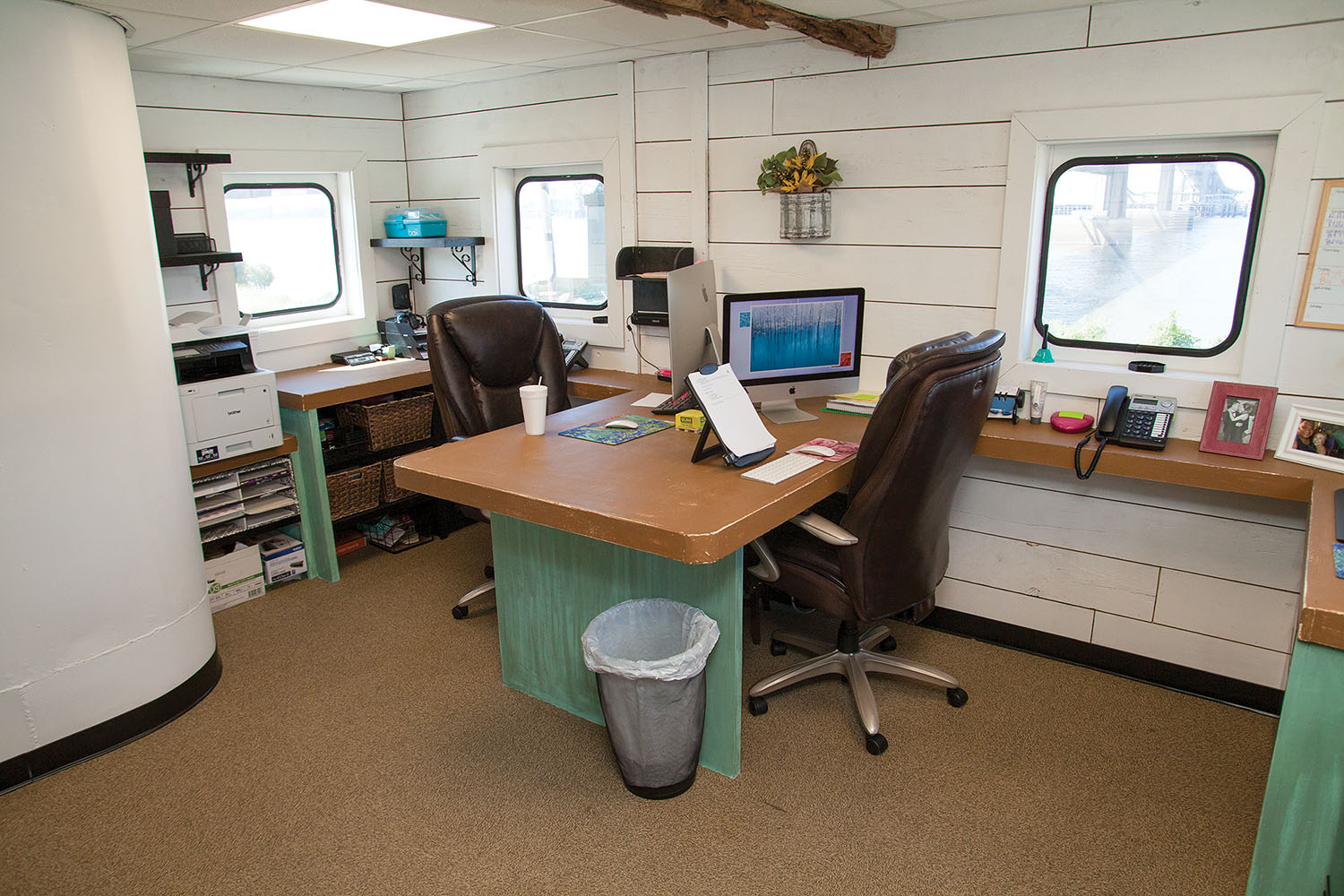 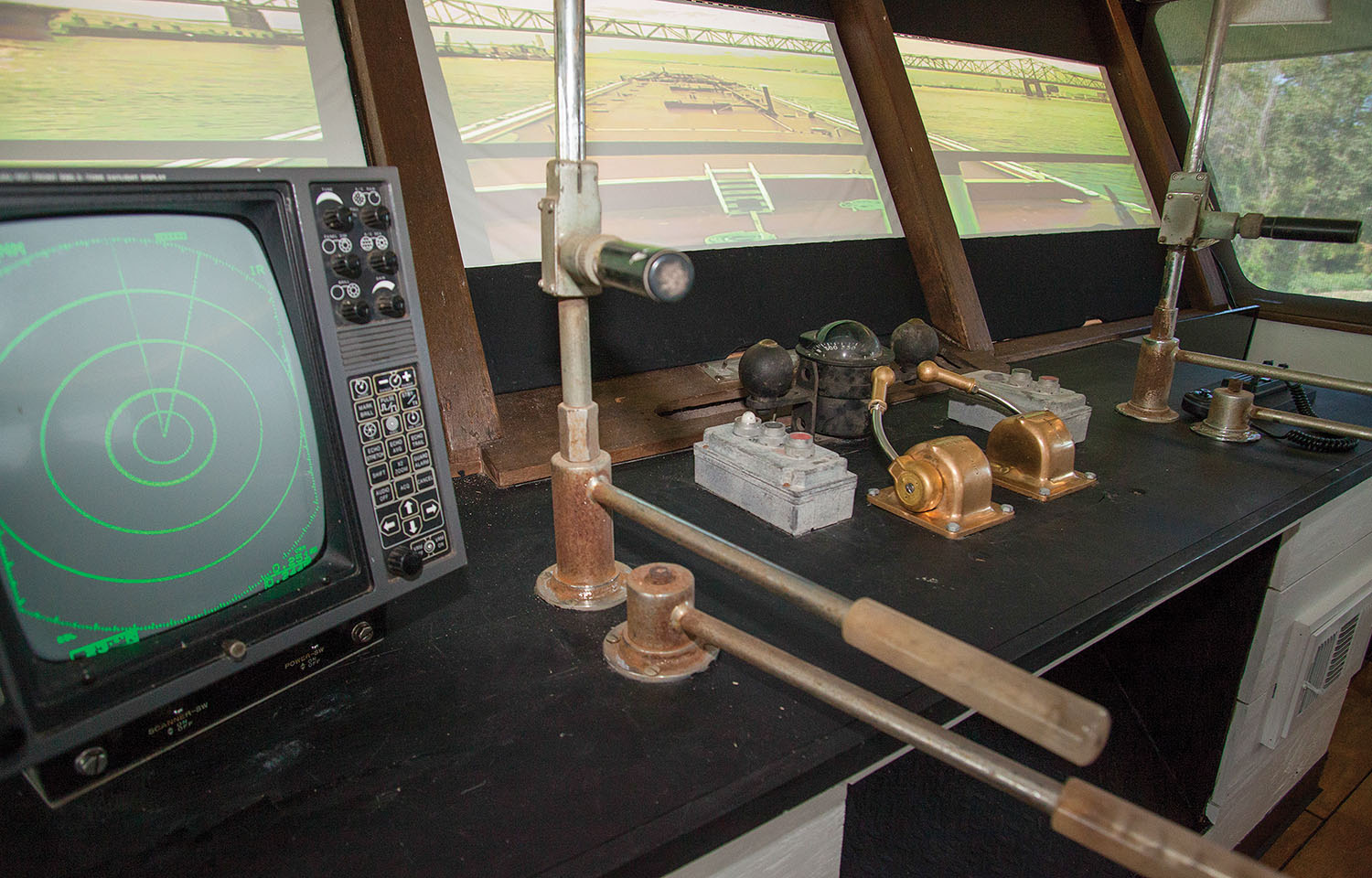 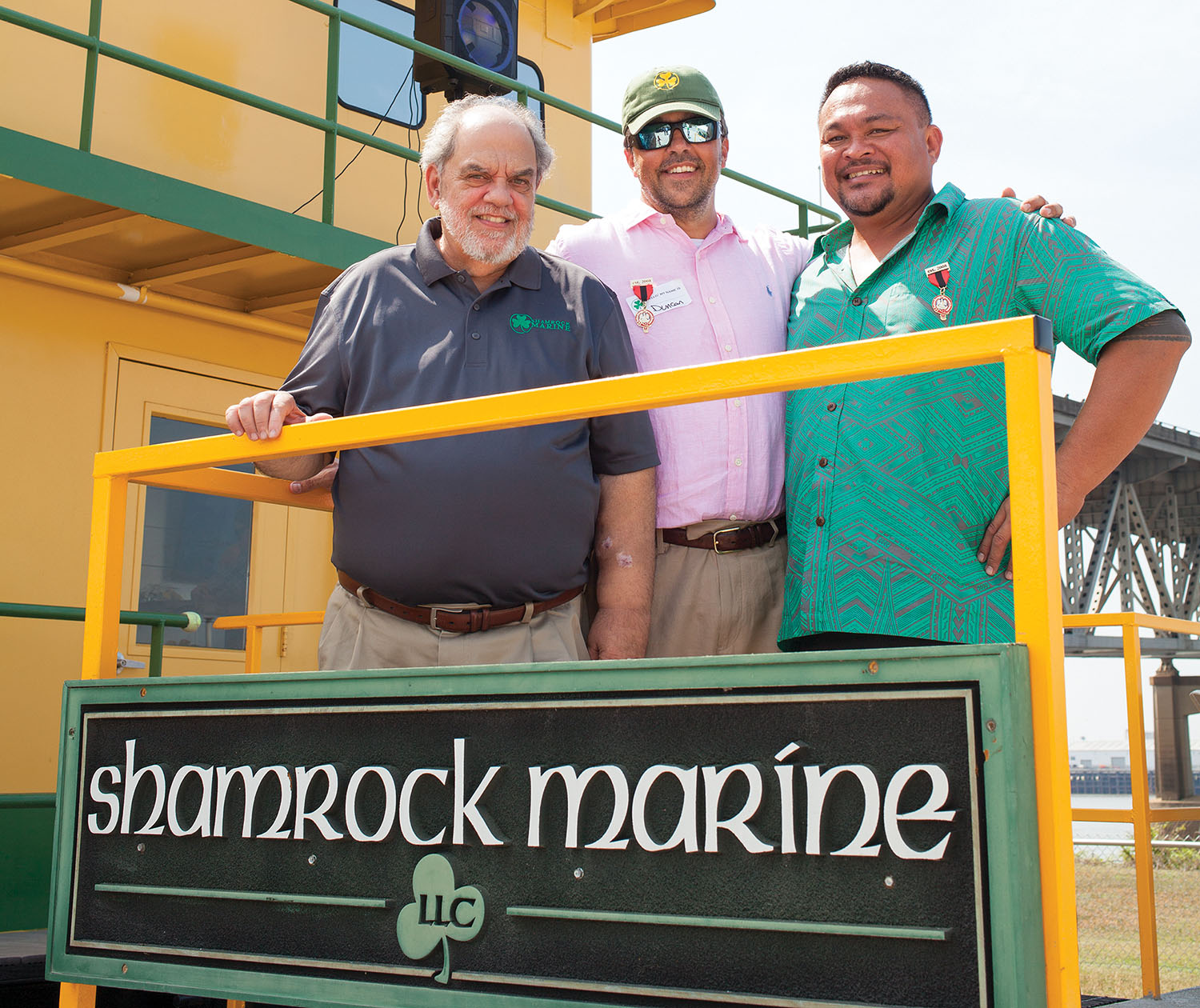 <
►
>
Pilothouse includes wheelhouse controls and a working Furuno Radar, along with simulated views of a tow on the river. (Photo by Frank McCormack)