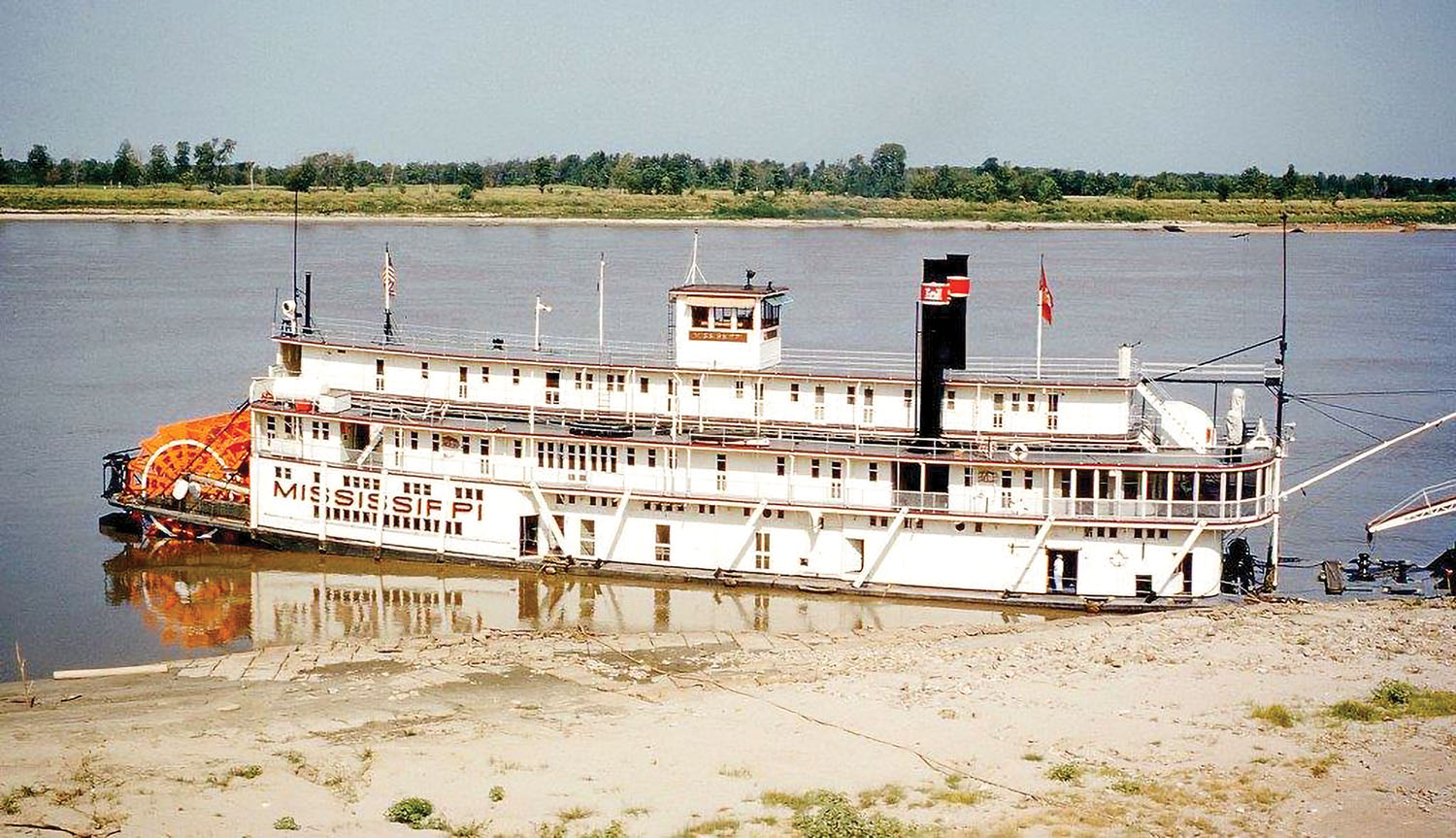 Third in a line of government steamboats to carry the name, the Mississippi had a unique beginning. A new steel hull, built by the Howard Shipyard at Jeffersonville, Ind., in 1926 and measuring 185 feet in length by 38 feet in width, was towed to Paducah, Ky. Waiting at the Ayer & Lord Marine Ways were the remains of the second Mississippi, formerly the towboat Leota. The upper works of the retired boat were then “scooted” over onto the new hull, which included totally new main deck bulkheads, boilers and engines. Reportedly, the only casualty of the ticklish operation was a broken pane of glass in a door on the texas deck.

The Mississippi commenced service in early 1927, on the eve of the great flood. Pride of the Corps of Engineers, the big sternwheeler worked in both the New Orleans and Memphis districts. Used by the Mississippi River Commission for annual river inspections, it generally made a fall low-water tour and another spring trip when the river was high.

Besides fulfilling its usual duties as an inspection vessel and towboat for river projects, the vessel also served in rescue operations during floods.

During the 1950s, the Mississippi answered a distress call from the tourist steamer Delta Queen, which had experienced a mechanical problem. The Mississippi quickly came alongside and towed the disabled riverboat into Natchez. The late Virginia Bennett, who was assistant purser on the Delta Queen, related to this writer that it was quite an adventure and that Capt. David Cook, the longtime master of the Mississippi, graciously invited the passengers and crew to come aboard for a tour. Bennett recalled that everything aboard the Mississippi literally gleamed and that one could have eaten off the polished decks.

Retired in 1961, the Mississippi was decommissioned in ceremonies at McKellar Lake when the new diesel-powered Mississippi IV was placed into service. This “new and modern” vessel was replaced in 1993 by Mississippi V, the largest diesel towboat ever built in the United States. The roof bell, used aboard all four predecessors named Mississippi, was retained and still rings over the river. In 2007, Mississippi IV was hauled from the river and actually rolled down city streets to become a museum at Vicksburg.

Mississippi III was sold at auction in 1963 to John Groffel, a St. Louis steel company executive, for $35,110. The boat was towed from Memphis to a landing opposite Hannibal, Mo., where tours of the riverboat were conducted in conjunction with a small steamboat museum and gift shop. In early 1966, the boat was sold to Frank Pierson, owner of the restored Goldenrod Showboat, and towed to St. Louis, where it was renamed Becky Thatcher. After extensive renovations, the former steamboat opened as a restaurant, steamboat museum, gift shop and bar. In the autumn of 1969, the O’Brien water tube boilers were removed to make space for the “Boiler Room Bar.” The Gillett & Eaton engines remained in place until 1973, when they were sold to the New Orleans Steamboat Company.

Sold at auction in 1975, the Becky Thatcher’s next home was Marietta, Ohio, where it served as a restaurant and showboat theatre for several decades. In late 2009, the Becky was moved to Pittsburgh. In early 2010, during severe winter weather, the boat sank and collapsed, a total loss. The Howard-built hull remains submerged in the Ohio at Neville Island.

Caption for top photo: The Str. Mississippi at Memphis in 1954. (Keith Norrington collection)