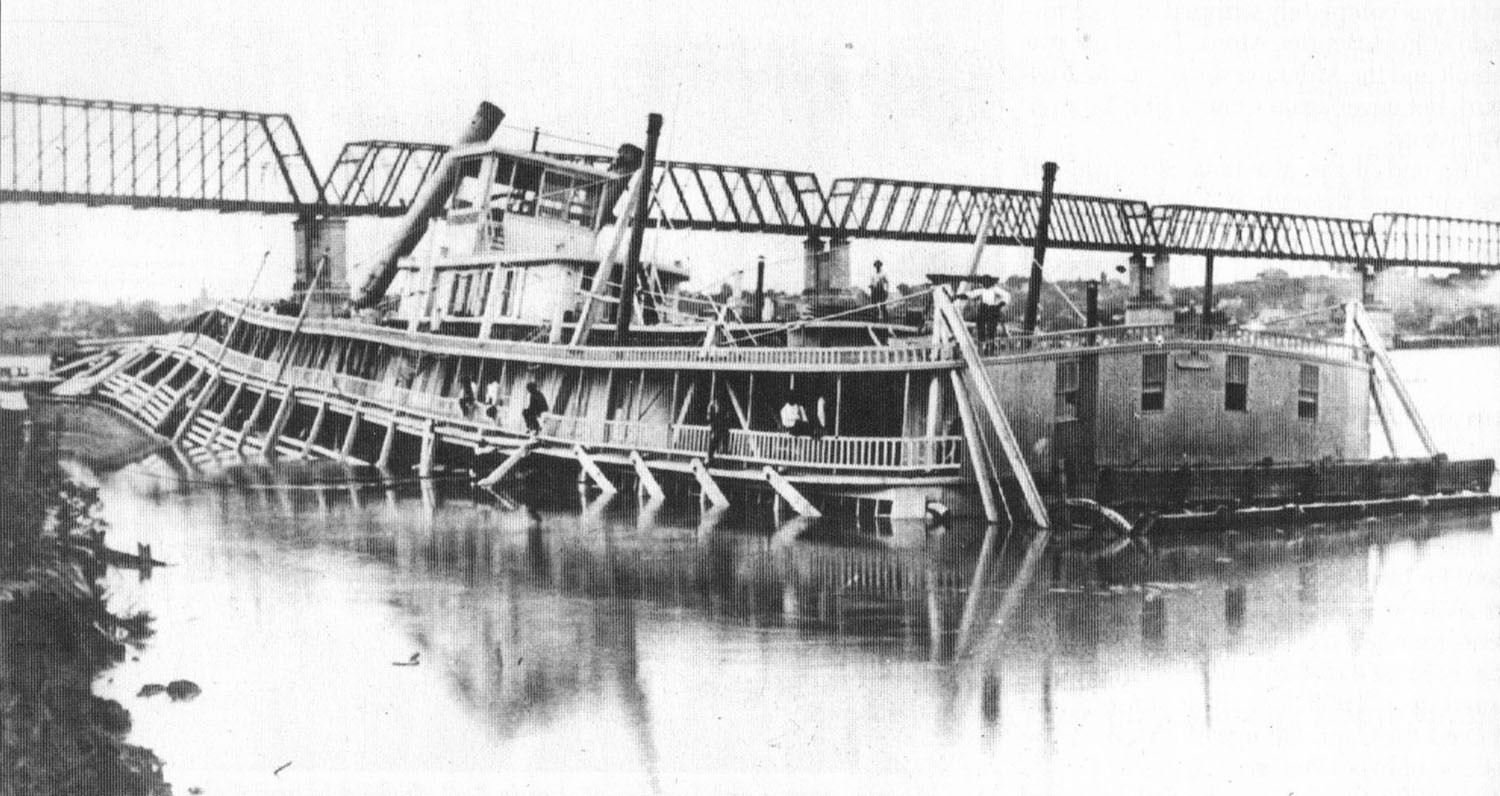 Built in 1879 for the Missouri River trade, the Montana was a packet with a wooden hull measuring 250 feet in length by 48.8 feet in width.

Displacing 959 tons, the big sternwheeler was constructed at California, Pa., and completed at Pittsburgh. Four boilers supplied steam to engines having 18-inch cylinders with a 7-foot stroke. The paddlewheel measured 18.2 feet in diameter.

Under the command of Capt. Nicholas Buisson, the initial trip went from Pittsburgh to Evansville, following which the new vessel was loaded for a trip to Fort Benton, Mont., arriving there on May 28, 1879.

On the evening of June 30, 1879, while the boat was preparing to load cargo at Bismarck, N.D., for another trip to Fort Benton, a tornado swept over the landing, completely stripping off the cabin of the Montana, but doing relatively little damage to the packet Dacotah, moored nearby. Repaired and returned to service, the Montana never again made a trip to Fort Benton. During the winter season, the boat ran to New Orleans.

On June 22, 1884, while passing upbound through the Wabash Railroad Bridge at St. Charles, Mo., with Capt. William Massie on watch in the pilothouse, the Montana veered, struck a pier and sank. The ferry John Ferguson quickly came to the rescue. According to a report in The Waterways Journal, there was no loss of life and all passengers and crew made it safely to shore.

During the autumn of 1964, George Kishmar, Missouri River inspector for the U.S. Army Corps of Engineers, initiated interest in learning more about the wreck of the Montana. Assisted by Ralph Borgmeyer, executive secretary of the St. Charles Chamber of Commerce, the men interviewed local residents, searched records and visited the site of the sinking.

The last written account at the time of the accident reported that the hull was irreparably cracked and the steamboat was abandoned by its owners. Shortly thereafter, the riverboat was stripped of nearly all furnishings, including fittings and cargo. It was reported that the pilothouse was removed and relocated, although no record has been found to substantiate the statement.

In 1961, two fishermen snagged an anchor said to be from the Montana. A group from St. Louis reportedly removed a number of iron skillets from the wreck.

In correspondence with this writer in 1991, George Kishmar stated that he donated a wheelbarrow, dug from the wreckage in 1964, to the River Room of the museum housed in the German School building at Hermann, Mo. In 1970, another dilapidated wheelbarrow, said to be from the Montana wreck, was loaned to curator Ruth Ferris, for display in her Midship Museum aboard the Becky Thatcher at the St. Louis levee.

The roof bell from the Montana, cast in 1879 by A. Fulton & Sons Foundry at Pittsburgh, was salvaged by boat broker John Klein; he offered it to a church at Cairo Ill., which declined the offer. The bell was later purchased by Capt. Gordon C. Greene for use on the packets Tom Greene and John W. Hubbard. Today the bell resides, in full view, at the Our Savior Lutheran Church in Louisville, Ky.

Caption for photo: The Montana, shortly after sinking in 1884 at St. Charles, Mo. (Keith Norrington collection)