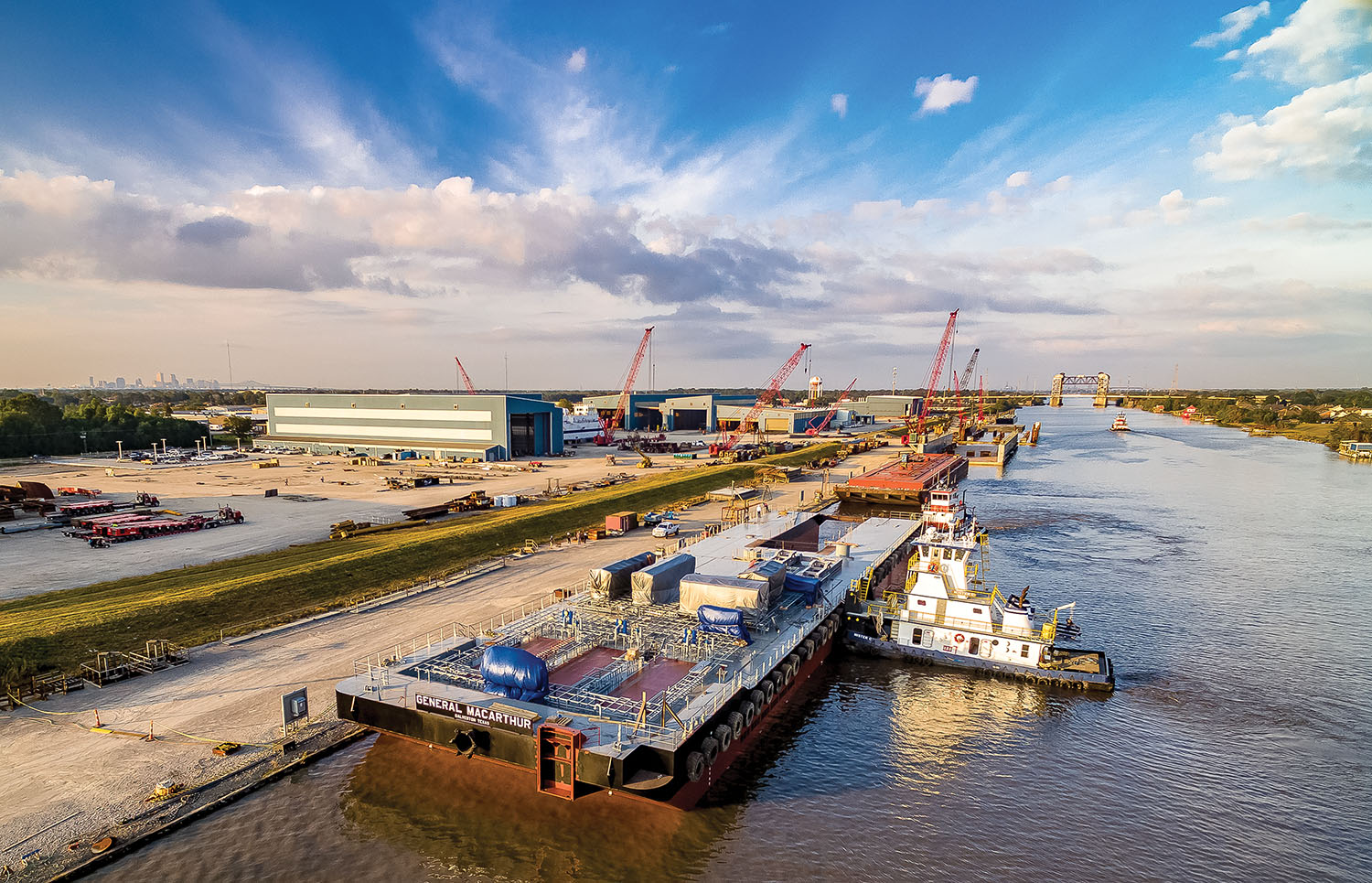 Callan executives Maxie McGuire, president; Ancil Taylor, executive vice president; Todd Knight, technical manager; and Kevin Pearse, operations manager, were present, along with John Sullivan, Gerald Sullivan and Jim Bean. The completed house, containing the bridge, crew quarters and offices, was brought into place near the ways on November 7 and was scheduled to be installed on the barge around November 15. The dredge is expected to be completed and ready to work by the end of the year.

The MacArthur is certified as an ABS All Ocean-classed vessel, and will perform capital, maintenance and beneficial use dredging such as marsh creation and beach renourishment. It is capable of working on all U.S. coasts and waterways, as well as across the globe.

The 32-inch MacArthur joins the 16-inch General Patton, the 12-inch General Eisenhower, and the General Pershing, an 18-inch unloader, in Callan’s dredge fleet.

Support vessels and equipment being built to serve the new dredge include supply barges, anchor barges, an idler barge and a large complement of dredge pipeline.

The dredge is 290 feet long, and with the 180-foot idler barge attached, the dredge has a maximum swing radius of 530 feet. Beam is 72 feet, depth 16 feet and draft 8 to 11 feet. Digging depth is 97 feet, suction diameter 34 inches and discharge diameter 32 inches.

Production automation and monitoring systems will be linked to the project and corporate offices, along with Hypack/DredgePack survey software and the Corps of Engineers’ Dredge Quality Management (DQM) system.

Crew accommodations include Wi-Fi, VHF radio and cell phone coverage. There are 33 beds, with private bathrooms in all staterooms. Also included in the crew quarters are a galley, gym and TV/rec room, laundry facilities, conference room, engineer’s office and captain and chief engineer staterooms.

The components were cast, machined and constructed at one of MPW’s facilities in Mobile.

Upon completion, the MacArthur will proceed to a job for a private client and will then be available to bid on all Corps of Engineers and port dredging projects.

Callan Marine is headquartered in Galveston, Texas, and operates an auxiliary office in Belle Chasse.

Caption for top photo: The newly launched barge tied up at a C&C Marine dock. (Photo courtesy of Callan Marine)