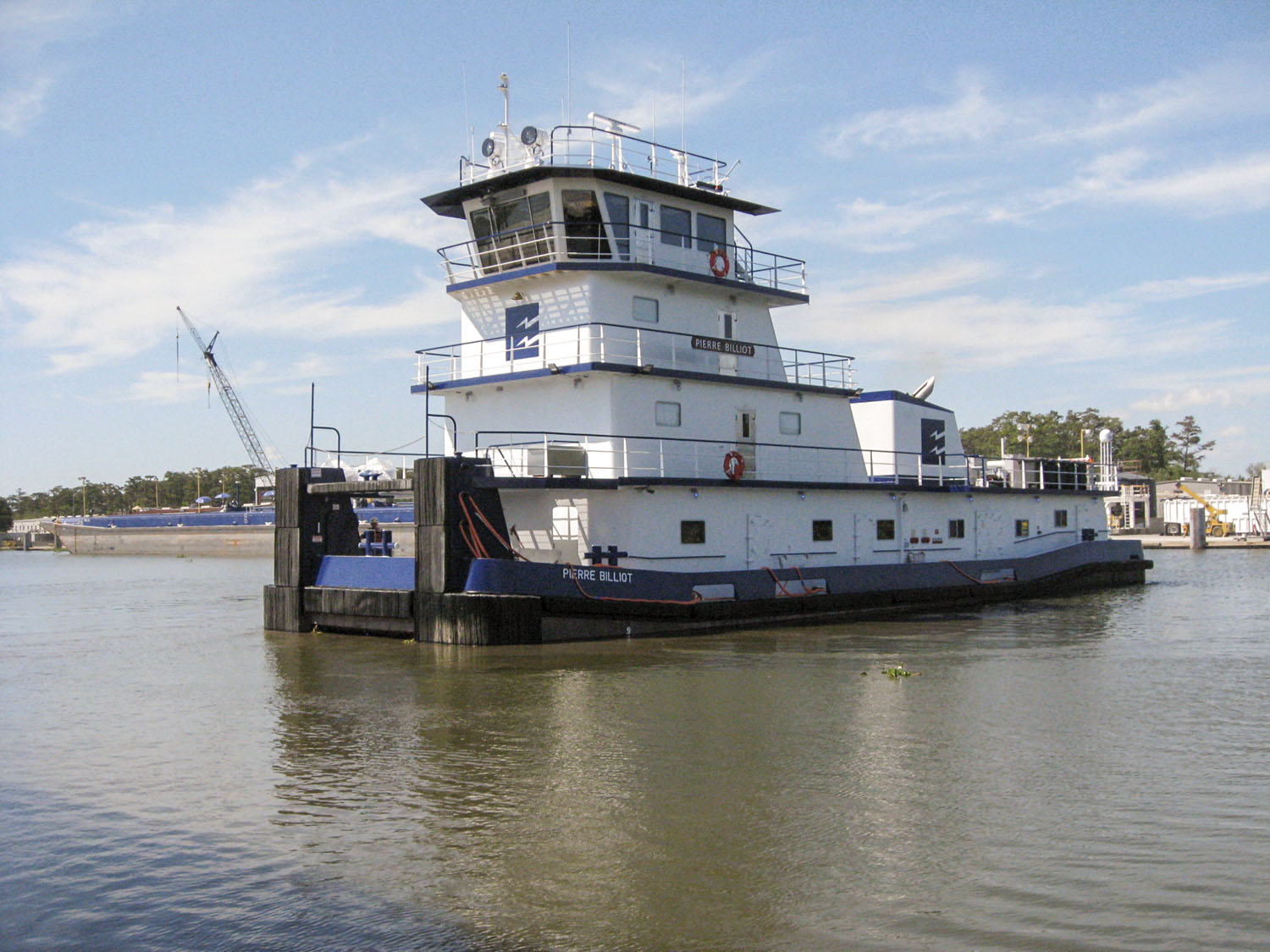 Enterprise Marine Services christened the mv. Pierre Billiot November 14 in a ceremony held at its Houma, La., headquarters. It was the fourth new vessel christened into the Enterprise fleet in just over a month, with the mvs. Lee W, Ralph C and Ed S christened in early October (WJ, November 11). The new towboat, which was built at Steiner Construction in Bayou la Batre, Ala., is named after Capt. Pierre Billiot, a 45-year veteran of the maritime industry who’s been with Enterprise Marine (and, prior to that, Cenac Towing) for all but 10 of those years.

Randa Duncan Williams, chairman of Enterprise Products Partners, spoke at the christening, emphasizing the significance that vessel names carry for the company.

“Many of the vessels we’ve named are to remember those who have brought us here, like the Dan L, the Terry H, the Lee W, the Ray S, the Nolan Rhodes, the Jeris Authement and the Delfred Romero,” she said. “Some are to honor those who are present like the three we’ve named after our current board members, the Ralph C, the Ed S and the Larry C.”

Williams added the Sheridan A and Sebastian D, named after her niece and nephew, represent the future of the company.

“Our newest vessel, I think, is really special because she represents our past, our present and our future,” Williams said. “Capt. Billiot has been with Enterprise since the very beginning, coming over from Cenac when we acquired the fleet. His storied career in the industry is legendary. His professionalism, hard work and attention to detail have led him to be an invaluable member of the Enterprise family.”

One of the hallmarks of Billiot’s time with Enterprise has been his dedication to training young wheelmen. Over the past 20 years, Billiot has trained more than 20 mariners who have gone on to serve as wheelmen, captains and relief captains, “thus helping ensure the future of our industry,” Williams said.

Williams pointed to Enterprise’s company motto, “Do the best you can every day,” a motto that goes back to her great grandmother. Billiot’s signature message to his crewmates—“Do your job, learn your trade and be proud of what you do”—is a perfect reflection of the company’s own mission, Williams said.

Eric Ricker, director of marine operations for Enterprise Marine Services, explained just how dedicated Billiot has been throughout his career. For the most part, Billiot has worked a “two for one” schedule, usually 20 days on the boat followed by 10 days at home.

That longevity and excellence on the job, Ricker said, was possible in large part because of the support he had at home.

“Capt. Pierre prides himself with being married to Mrs. Brenda for 41 years,” he said. “He talks about it in the fleet and everywhere else.”

Ricker said Billiot’s love of family can also be seen in his pre-shift change routine. He comes in for the crew change meeting. Then before heading to the boat, he makes the short drive to his house to give his grandchildren a hug and kiss.

Ricker said, in addition to his longevity as a captain and commitment to training the next generation of wheelmen, Billiot is also a first-class mariner.

“His navigational ability and tanking ability are second to none,” Ricker said. “He maintained a high profile Chevron contract for over 18 years from New Orleans to Pascagoula to Panama City. Amazing.”

That dedication to safety earned Billiot an Enterprise President’s Award in 2017, which recognized him for zero incidents.

Since June, Billiot has been semi-retired, working about 10 days a month. Still, his level of professionalism is the same, Ricker said.

“He still works as hard as if it’s his first day,” he said.

Speaking to the crowd, Billiot credited his father instilling within him a love for the maritime industry and a commitment to excellence.

“When I was a kid, I used to go to the boat with him,” Billiot said. “When I was there, he’d let me drive the boat. That was my first taste driving the boat. I must’ve been about 13 or 14 years old.”

His father went on to spend 40 years in the maritime industry. His father retired at age 71. Billiot said it wasn’t until his father’s funeral 15 years ago that he realized the pride his dad had for his son.

“His friends told me he was always bragging about his son being a captain,” Billiot said. “After the funeral, I thought about it, and I realized I grew up a lot like my dad.”

And that’s part of why Billiot is so passionate about training the next generation. It’s passing on the skills and passion he learned from his father as a teenager and the experience he gained over time as a captain.

“There’s a few I trained that I know were in diapers when I started,” Billiot said. “Now some of them have their own boats.”

Since the summer, Billiot has been on a two-for-one schedule, only now it’s reversed. His wife, Brenda, said its a joy having Billiot home, where she’s the captain now.

“I told him—and I tell all my friends—he has to jump on my ship,” she said to laughs. “He’s on my time. He just don’t get paid. Ladies, when your husbands go to retire, you tell them the same thing.”

“It’s a real testament to the growth of our company,” he said.

He also thanked Bill Hall, Enterprise Products vice president of trucking and marine, for his steadfast leadership and support.

“On a personal note, what a great mentor he’s been for me,” Moss said. “Bill has been a big part of what we’ve done at Enterprise Marine.”

Following a prayer of blessing for the vessel and crew by Craig Dalferes, pastor of St Matthew’s Episcopal Church in Houma and a river chaplain associate with Seamen’s Church Institute, Billiot and his family climbed aboard the mv. Pierre Billiot and officially christened it into the Enterprise fleet.

The mv. Pierre Billiot is an open wheel towboat that is 100 feet long by 34 feet wide by 11 feet deep with a working draft of 9 feet. The pilothouse eye level is 34 feet 6 inches. The twin-screw boat is equipped with Cat 3512 C Tier III engines from Thompson Power Systems that combine for 3,000 hp. Karl Senner supplied the Reintjes WAF 773 gears that have a 6.4:1 ratio. The boat’s 88- by 72-inch wheels, with 9-inch shafts, Simplan seals and Thordon bearings, came from Sound Propeller.

The boat’s engine cooling system is an East Park Duraweld model, while engine alarms are by Rio Hydraulics, as is the steering system. The Pierre Billiot can carry up to 38,000 gallons of fuel, 4,000 gallons of water and 800 gallons each of lube and waste oil.

The towboat has five bedrooms, five bathrooms, an electronics room and a laundry room. The fully equipped galley features a stainless steel, 48-inch-wide range. The deckhouse has Mohawk Tybee Island plank flooring and custom paneling throughout. The pilothouse is equipped with Furuno FAR 2117 and Furuno FR 8062 radars along with a full set of other up-to-date electronic and communication equipment.

On deck are two Patterson 40-ton winches and a Thern boat handling crane. There is a fleet deck. The hull is protected by Schuyler shredded tire bumpers. Paint is Carboline.

For more pictures from the christening of the mv. Pierre Billiot, see the slideshow below. 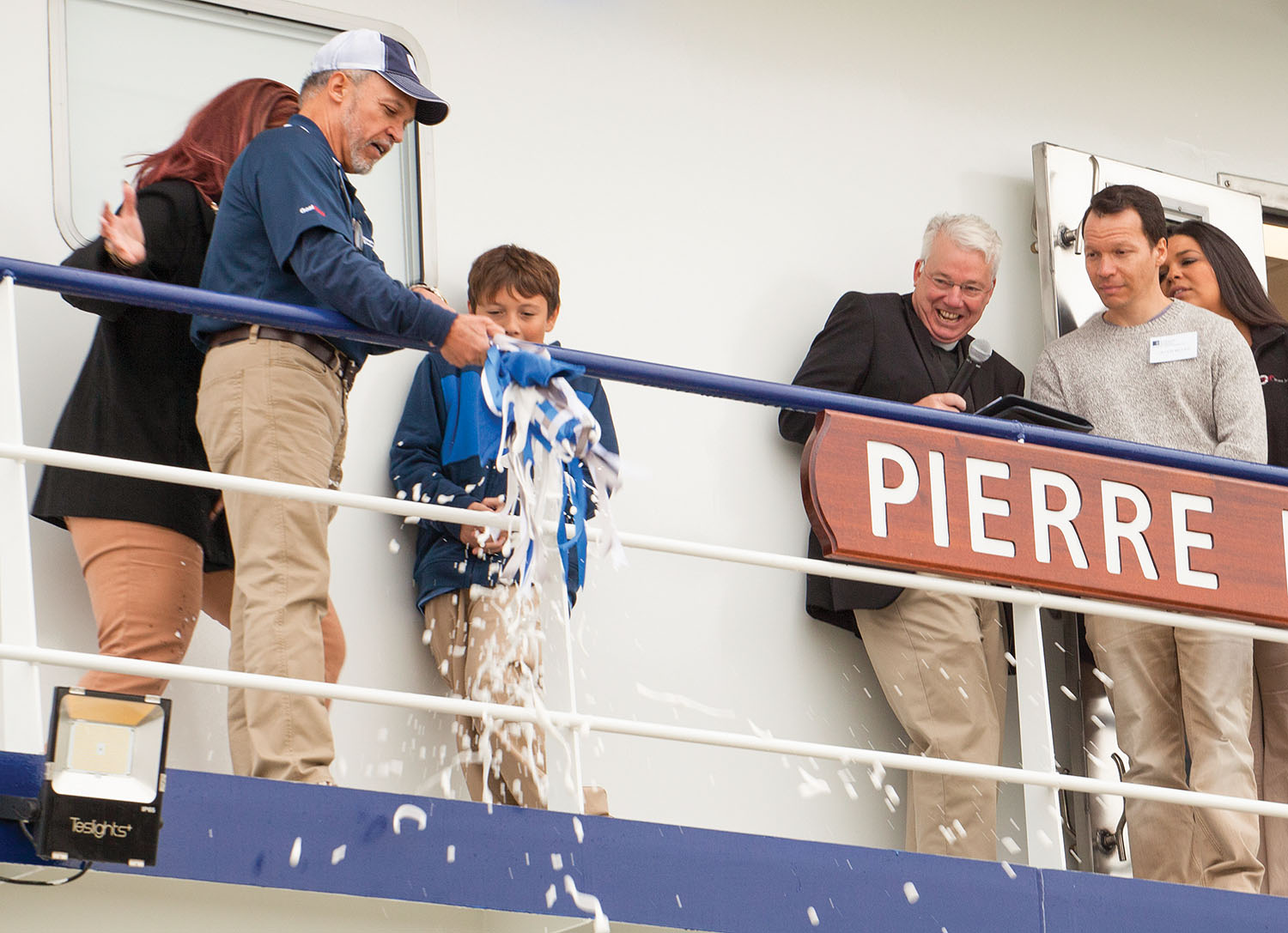 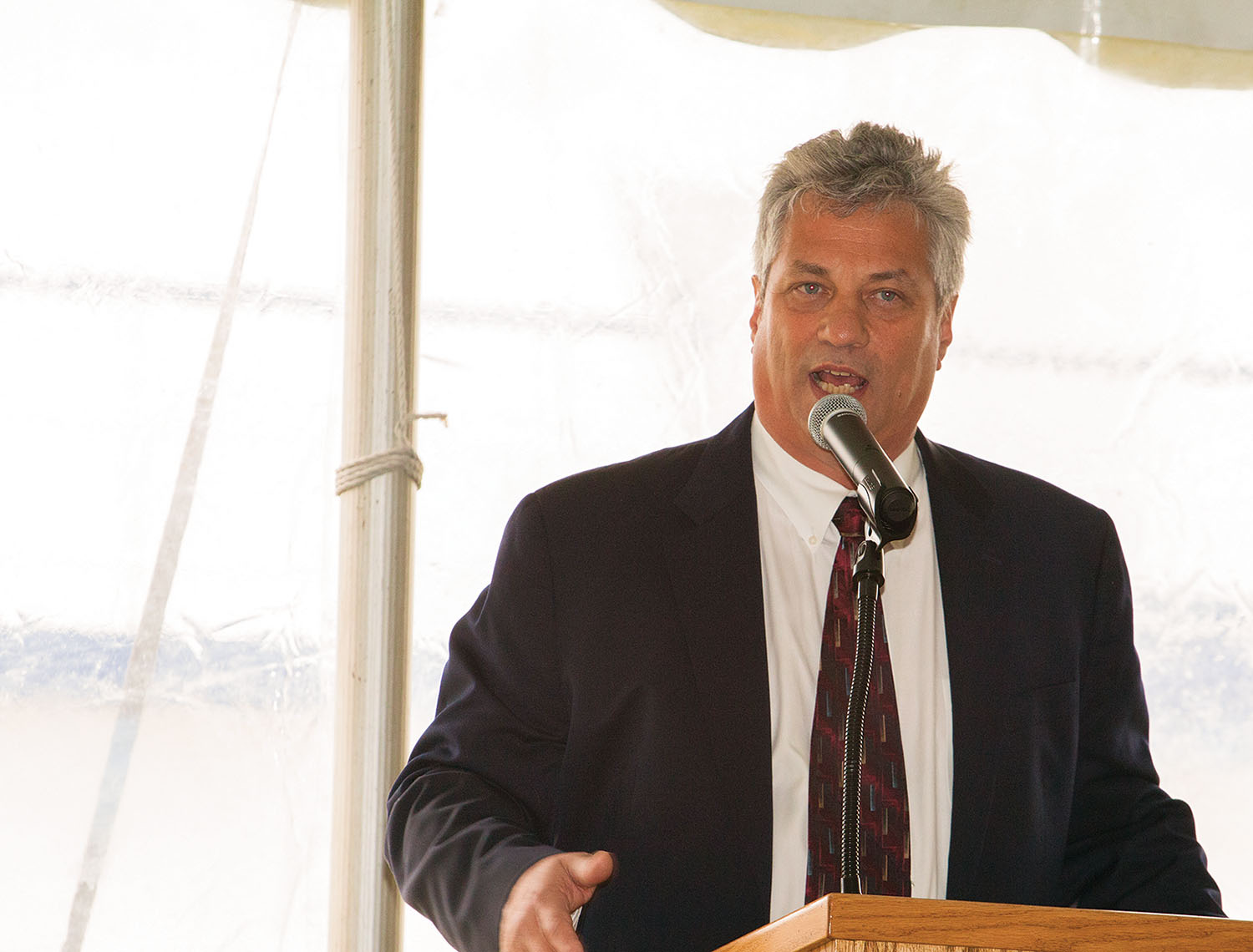 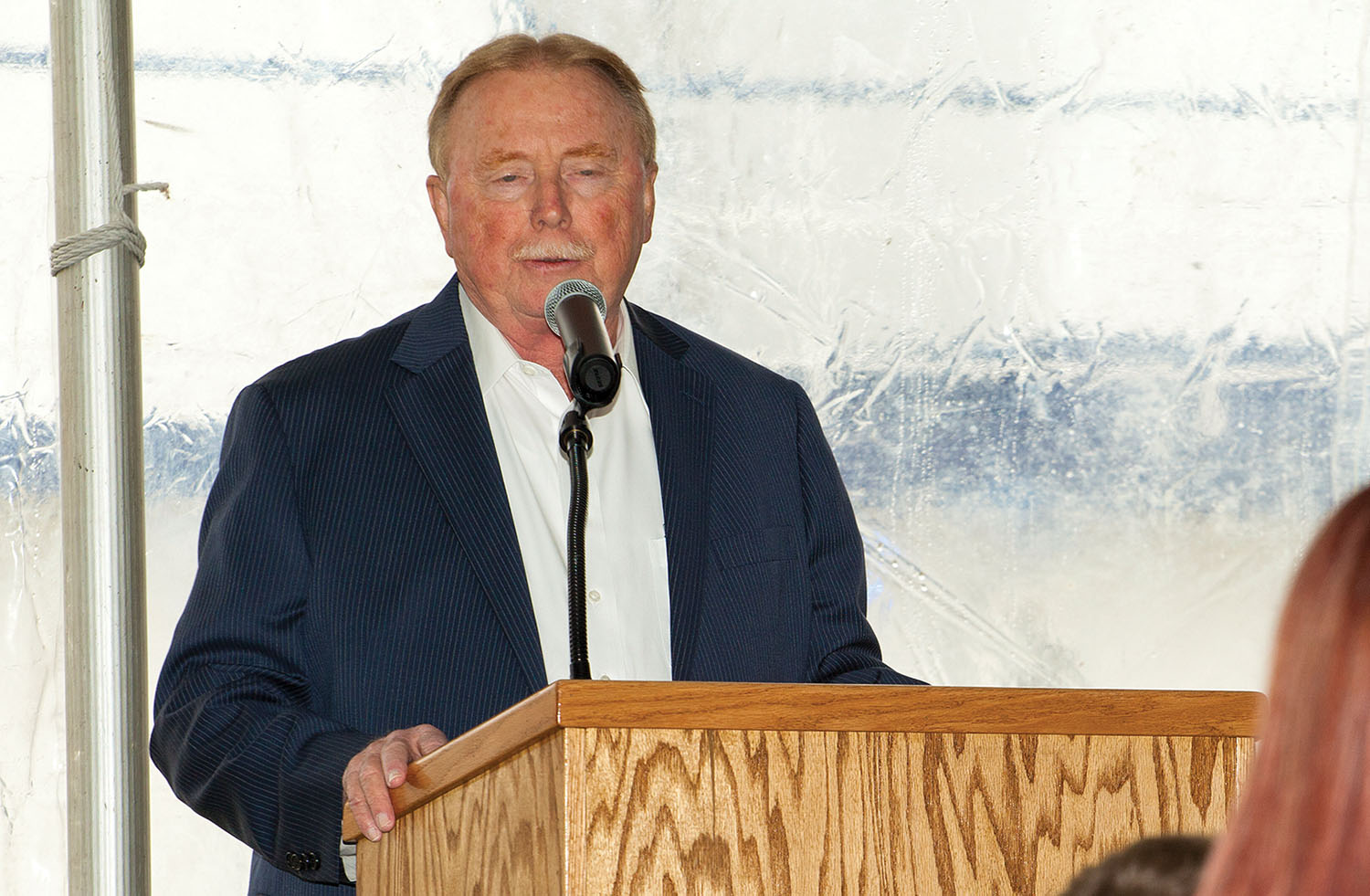 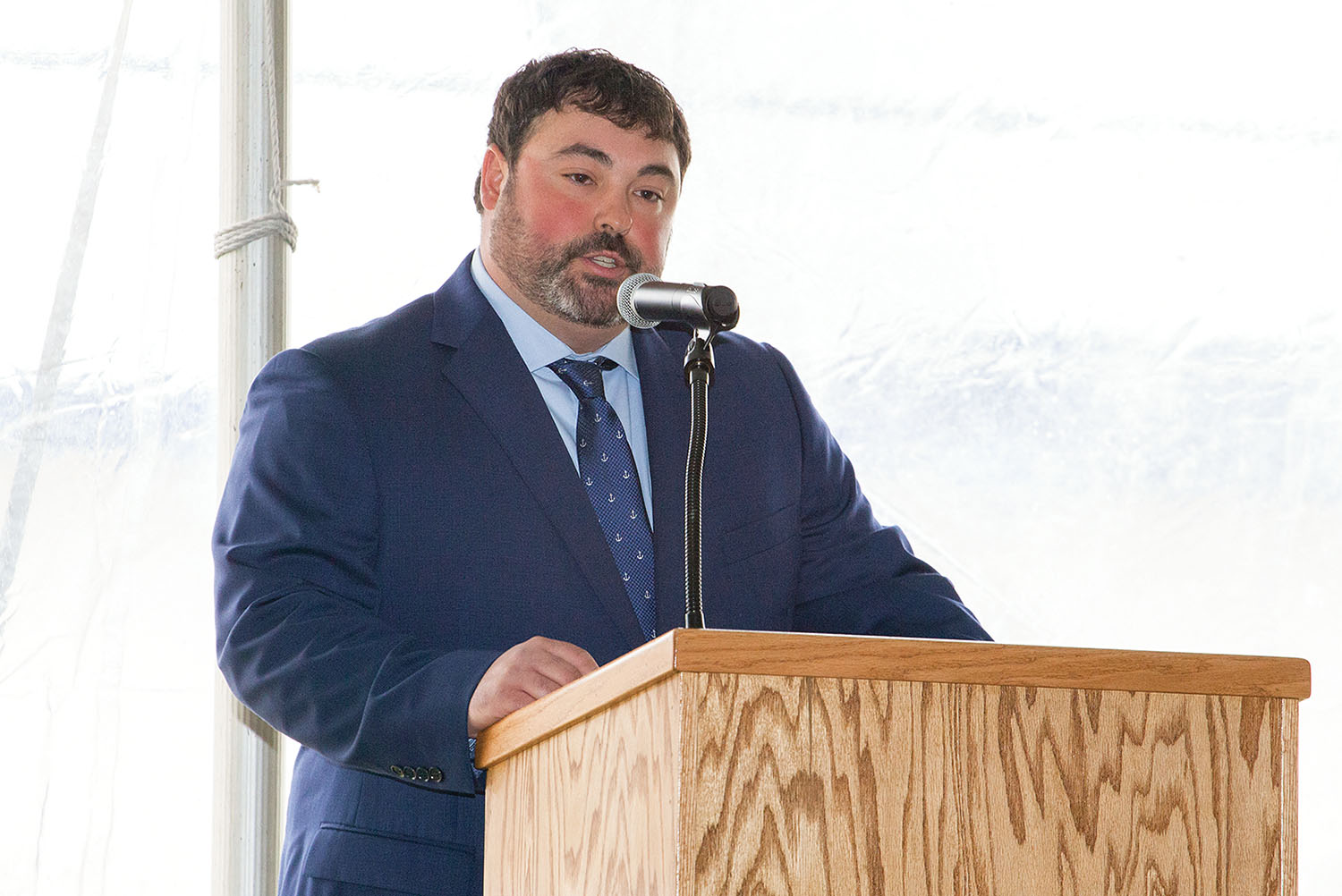 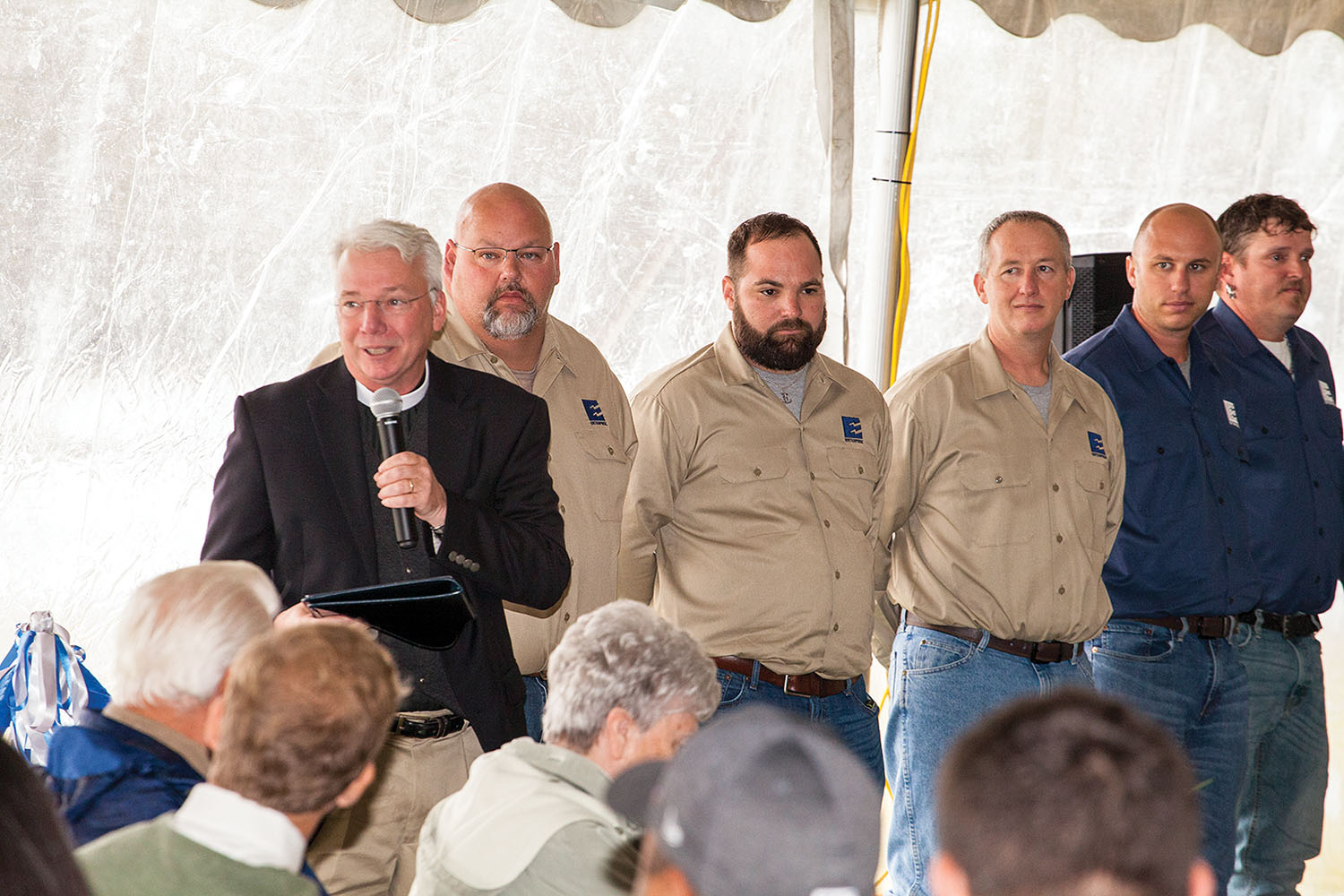 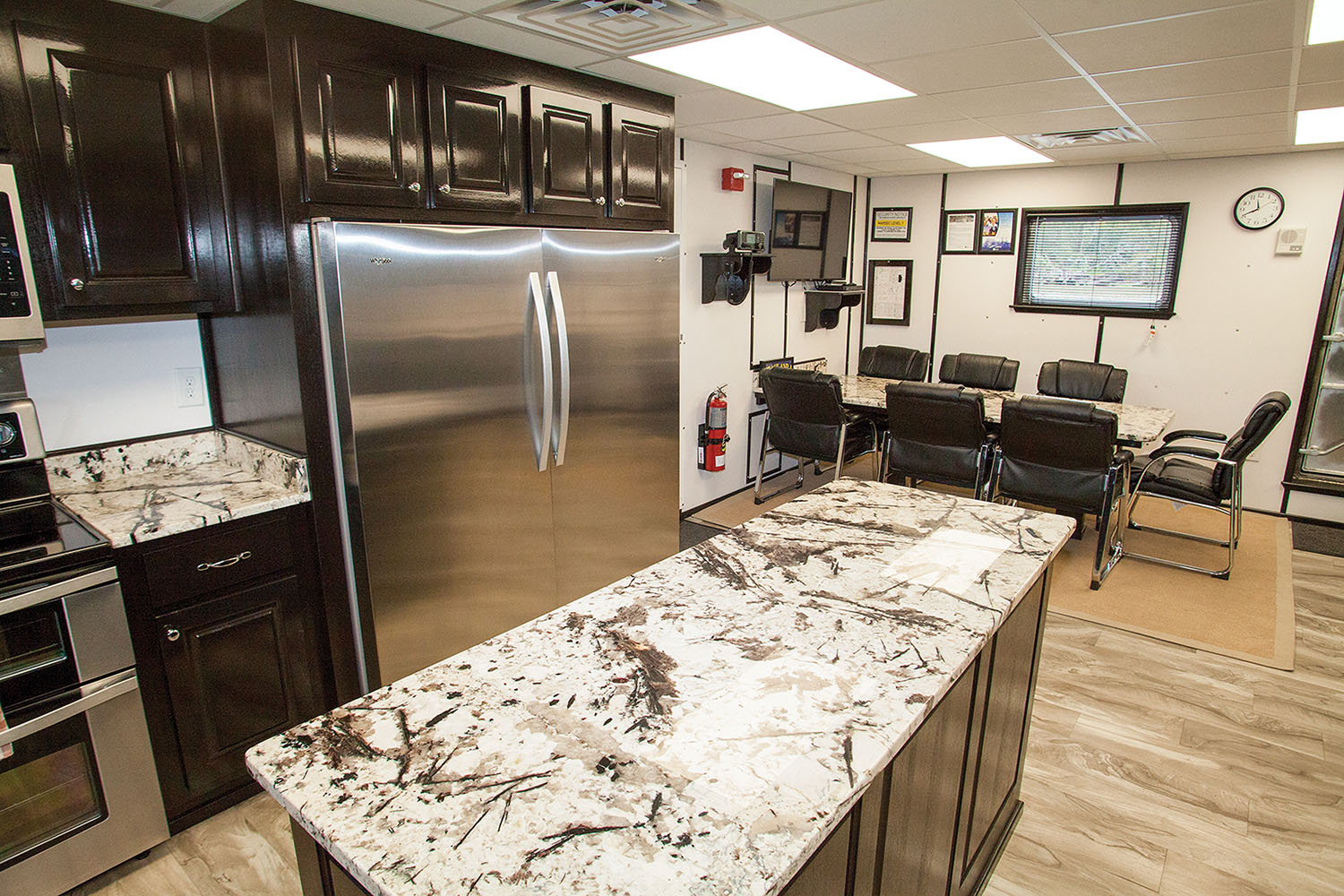 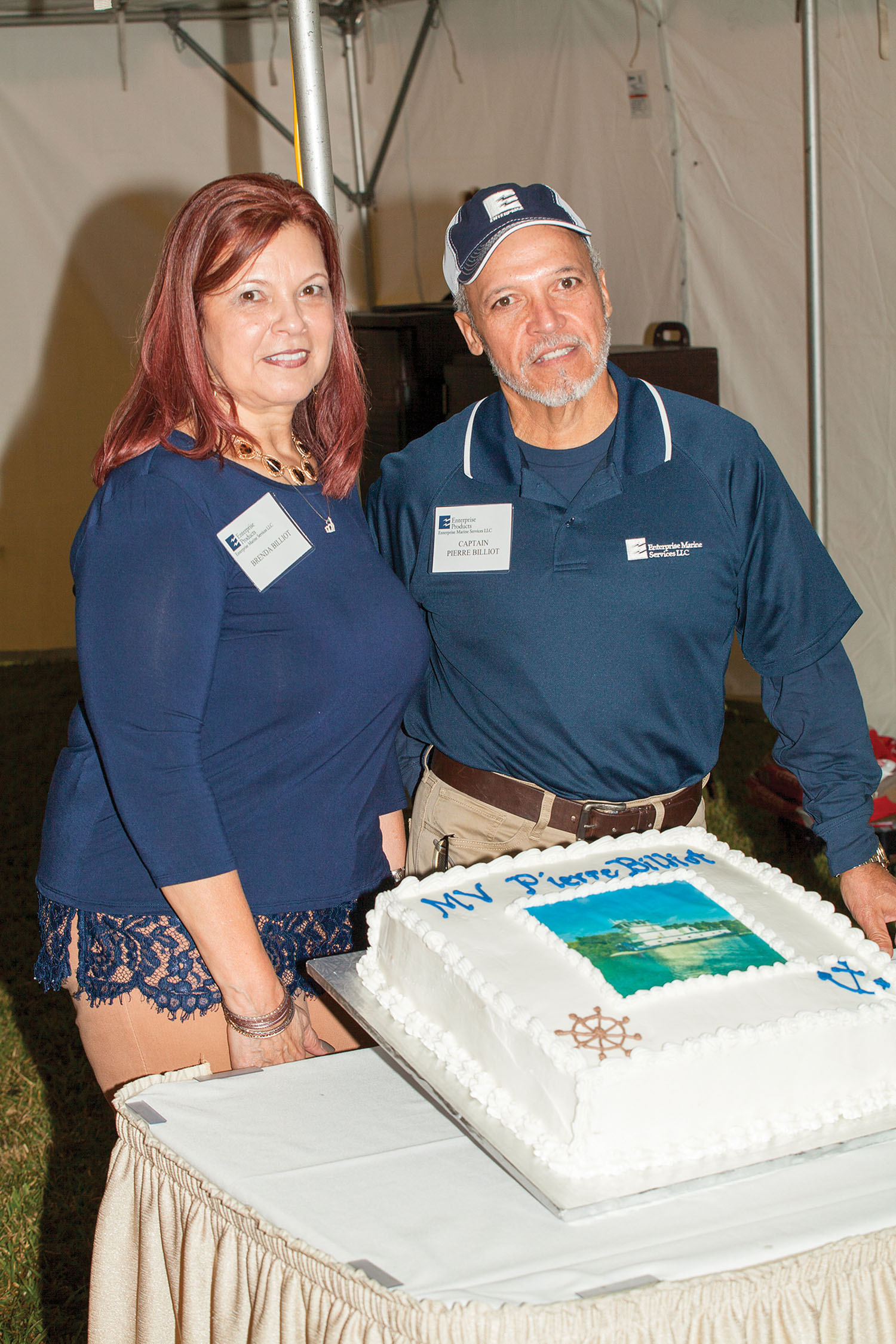