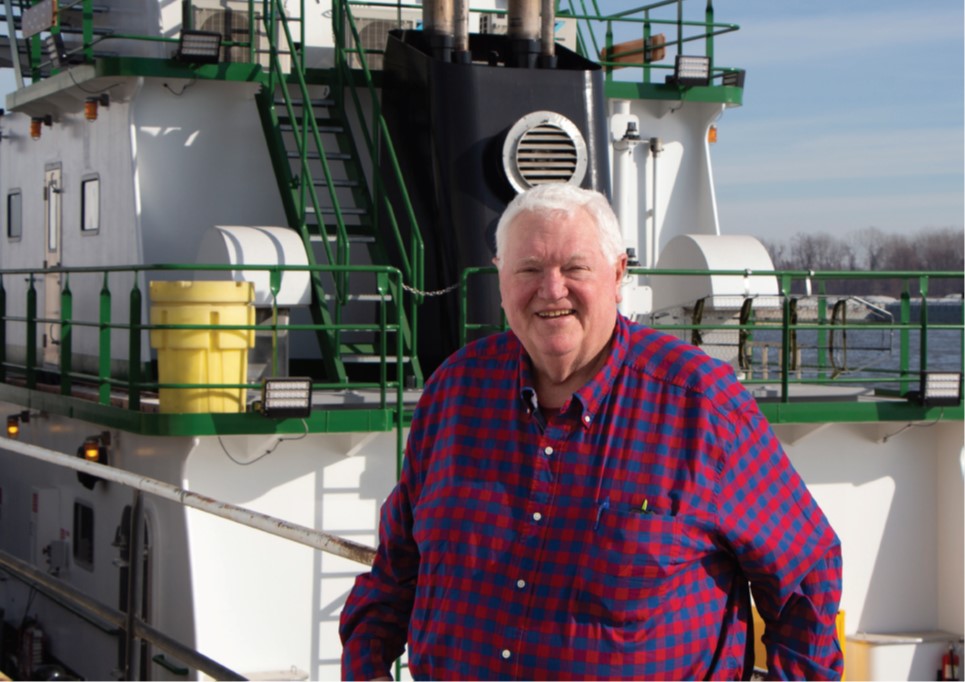 Easy to laugh, Jim “Goat” Patterson is known for hearty outbursts that can spill over into the next room or fill a convention center, as one might expect from a riverman who stands 6’5” and weighs well over 300 pounds. Some of this was on display during his acceptance speech at the recent River Bell award luncheon, where he modestly downplayed his being named a River Legend by his peers in the industry. But mostly it’s an attribute that’s simply an outgrowth of his mirthful demeanor.

He was born and raised in Webster Groves, Mo., a suburb of St. Louis, the son of a production manager at a company that made industrial lubrication devices, some of which were used on towboats. That wasn’t his introduction to the river, though. That came in the 1960s, when he opened the door to the men’s locker room at high school, where he played football and basketball, and the guy on the other side jokingly pretended that it hit him, sprawled on the floor and “made all sorts of racket.”

That’s how he met Pete Merrill, who would later play a pivotal role in his career in the river industry. But, first, after a year or so of college and an odd job or two, he enlisted in the Army and shipped out to Viet Nam, where he was stationed along the DMZ zone, near the Ho Chi Minh Trail. “We got into a lot of skirmishes,” he said.

On his return and needing a paycheck, which is something “a lot of young people may not be familiar with today,” he said, Goat answered an ad in the newspaper for a “management trainee” position. It turned out the ad was for The Valley Line company, and he was hired as a dispatcher. This was the beginning of his career in the river industry, except for a brief interlude, alluded to by George Foster, president of JB Marine Service, in his introductory remarks at River Bell.

“Can you imagine Goat selling women’s clothing?” he asked the crowd, because after The Valley Line, that’s what Goat did. He signed on with a firm in New York to represent its line of ladies’ fine fashions in the St. Louis area. “I heard about the job from a friend, and while it wasn’t anything I wanted to make a career of, it paid the bills.”

Once, between trips to New York, Goat said, he was in Alton, Ill. with Merrill, a marine surveyor, on his way to play a round of golf. They stopped at Norman Brothers there because Merrill had to check on a barge that was sinking. “Pete got a phone call and had to leave, so he just dropped me off and told me to watch what the workers were doing and take notes, and that was my introduction to surveying. I started full time soon after that in the early ‘70s and worked at Merrill Marine Services for 20 years. During that time, I had the opportunity to see a lot of river and meet a lot of good people. I owe a lot to Pete.”

In 1990, Patterson left the surveying business to partner with Don Leeker, who had worked for a barge line, to form Olympic Marine, a harbor service in charge of operating the fleets of Consolidated Grain & Barge. “Four years later, I formed my own company, Paragon Marine Service, to run the fleets, while Leeker moved on to the managing of barges with Peter Frane,” said Goat.

Then in 1999, because of issues having to do with the foreign ownership of CGB, his principal customer, he reorganized as Osage Marine Services, Inc., which is what the company is named today. The firm operates fleets in the St. Louis harbor, where it is headquartered, and in Hennepin, Spring Valley and Naples, Ill. on the Illinois Waterway. The fleet at Cape Girardeau, Mo. on the Mississippi River south of St. Louis, was added later, Patterson said.

In total, Osage Marine now operates 18 harbor boats, having only recently taken delivery of the first of two new 1,600 hp. vessels from Master Marine (see story on the mv. Charlie T elsewhere in this issue). To help manage the fleeting and switching services, the company has some 180 employees, including Patterson’s son, Mark, who is vice president of operations, and daughter, Mandy Doherty, who is vice president of administration. Goat married his wife, Phyllis, in 1974.

A willing contributor to industry affairs, Patterson has served on the boards of The American Waterways Operators and the Propeller Club. Foster said, “Goat’s opinion is always highly regarded. He has made a real contribution to the maritime industry especially in the St. Louis harbor. He has given his time, energy and experience by chairing both the St. Louis Harbor Fleeting Association and the St. Louis Harbor Security Coalition. His unselfish giving of his time has resulted in a great partnership with the United States Coast Guard.”

Merrill also mentioned that Goat’s magnanimous personality was in large part responsible for the growth of Merrill Marine while he was there. “He allowed us to expand by drawing others to the company, because he’s always been a good guy.

“His goodness is in all he does.”

(Oh, about his nickname. Apparently, no one other than Pete Merrill knows how he got it. “I’m the only one, beside him, who knows the derivation of his nickname, and I’m not telling anyone,” Merrill said.)