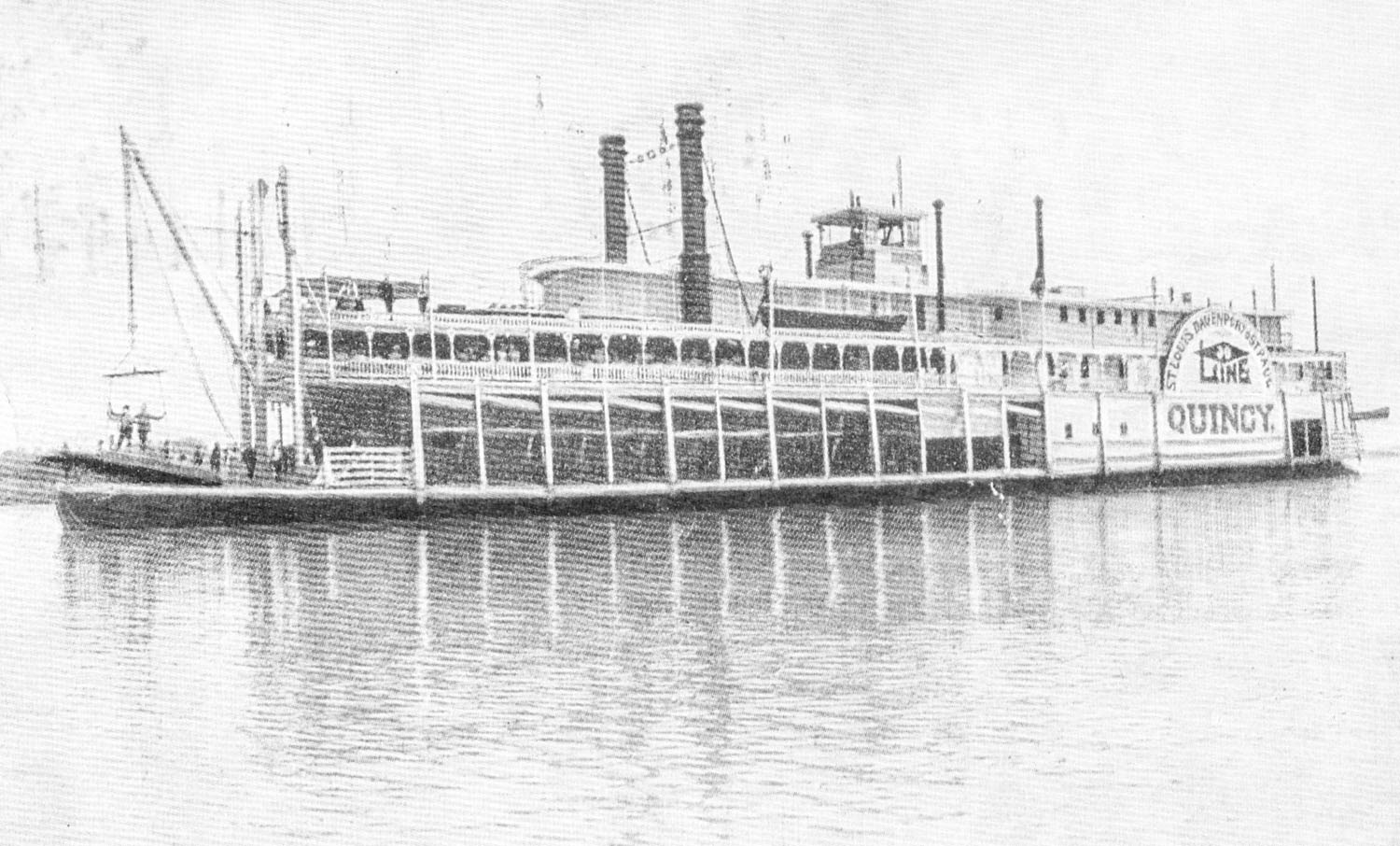 Happy New Year! We begin the Old Boat Column for 2020 with one of the beautiful steamboats operated by the famous Diamond Jo Line, the steamer Quincy.

Built at Dubuque, Iowa, in 1896, the handsome sidewheeler was constructed on a wooden hull measuring 264.7 feet in length by 42 feet in width and with a depth of 8 feet. Two Scotch marine boilers supplied the steam for engines having 23-inch cylinders with an 8-foot stroke. Much of the equipment from the steamboat Gem City (1884–1895) was utilized in the construction of the Quincy.

The boat originally ran on the Upper Mississippi River in the St. Louis–St. Paul trade with Capt. John Killeen as master.

In July 1906, the steamboat sank at Trempeleau Mountain, Wis., but was quickly raised and returned to service. The Scotch boilers were removed and replaced with four Western River style boilers.

By 1911, under the ownership of Streckfus Steamers Inc., the vessel was entered into the St. Louis–New Orleans trade, the last of the big sidewheelers to make this run.

During the 1917 season the engineers who served on the boat were Courtney M. Ellis and Ashley Foster. Ellis passed away suddenly from a heart attack several hours after being aboard the Belle of Louisville for the second steamboat race with the Delta Queen in 1964.

The Quincy was long considered the “brag boat” of the Streckfus fleet and was so popular that extra passenger rooms were added on the roof near the paddlewheel boxes.

In 1919, the Quincy was totally rebuilt into an elegant and elaborately decorated excursion boat named J.S., to honor Capt. John Streckfus. The “De Luxe” riverboat handled most of the excursion business at St. Louis until the debut of the S.S. President on July 4, 1934. The J.S. tramped the Upper Mississippi all the way to St. Paul, also making numerous forays to the Ohio River, under the command of Capt. Verne Streckfus.

The popular boat was dismantled at the St. Louis levee during the winter of 1939. River historian and museum curator Ruth Ferris acquired wooden acorns, numerous pieces of gingerbread trim and jigsaw railing, which survive today in river museums and private collections. The four-barrel whistle was installed on the Streckfus excursion steamer Admiral, and the Nichol steam calliope went to the President.

When the Admiral was dieselized in 1974, the whistle was transferred to the President at New Orleans. The artifact is now in the collection of the Pott Waterways Library of the St. Louis Mercantile Library.

Howard Museum News
A brief ceremony was held on December 8 to celebrate the opening of three exhibit rooms on the long-closed third floor of the 22-room Howard mansion. Partially funded by a grant from the J. Mack Gamble Fund of the Sons & Daughters of Pioneer Rivermen, the new displays include a large model of the famous and elegant steamer J.M. White (built at the Howard Shipyard in 1878) recently constructed and donated by model builder Martin Richardson, who has also built and presented the museum with models of the steamer Mississippi III and the Civil War ironclad U.S.S. Louisville.