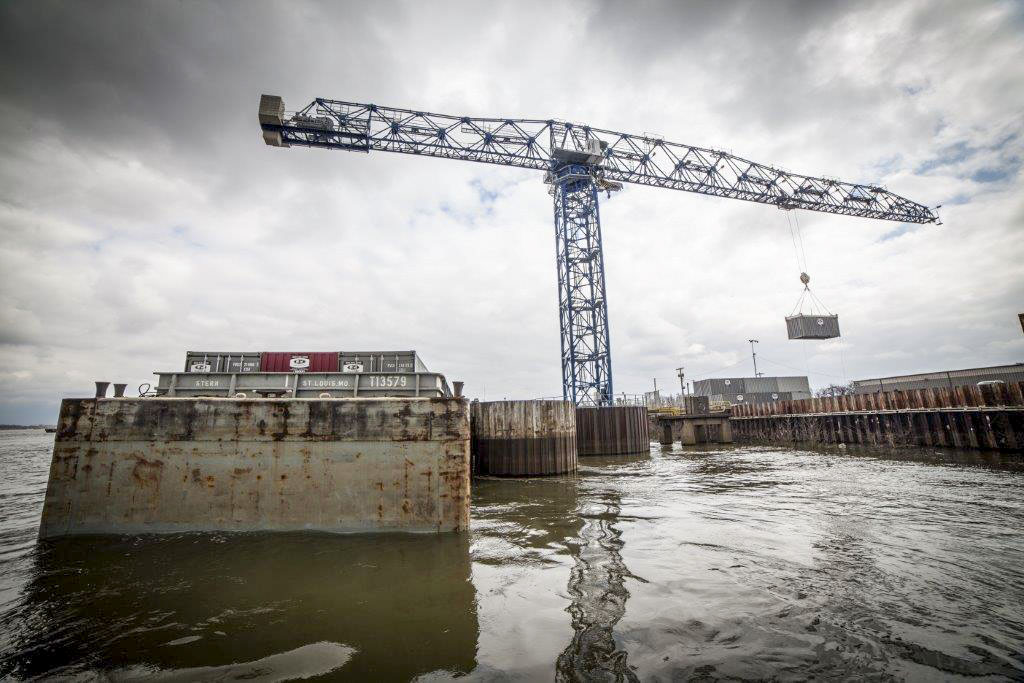 Grant money from the Maritime Administration’s America’s Marine Highway Program will help fund more than $7.5 million for nine projects, including one between Paducah, Ky., and Baton Rouge, La.

The Paducah-McCracken Container on Barge Marine Highway Project was awarded $480,000 as part of a new project connecting the two areas, MarAd announced January 6.

Paducah-McCracken County Riverport Authority Executive Director Bill Miller said he was excited for the port to be recognized as a grant recipient. It will enable the port to work with an unnamed transportation partner, taking the first steps toward obtaining equipment necessary to begin regularly scheduled container-on-barge service, he said.

“We intend to investigate to make sure we are using the money in the best manner for positive results,” Miller said.

MarAd said the money would be used to support the purchase or lease of equipment at a Baton Rouge facility that will be used to load and unload containers.

The service will be centrally located near the confluence of major inland waterways and connect to the international export ports of Louisiana, according to MarAd.

Miller declined to release specifics, although he said he expected more information to be available soon.

Speaking in general terms, Miller said container-on-barge service has a lot of positive economic and environmental benefits. The process allows barges to transport shipping containers filled with goods or raw materials to and from domestic and international ports. Using the service will expand shipping options for the country’s heartland, he said.

Container-on-barge is a lower-cost way to move products between regionally operating companies and international markets without the dangers of land-based shipping as well as the wear and tear on highways when such products are shipped by truck, Miller said, adding, “It’s something we can do safely, efficiently and in an environmentally friendly way to move freight along the inland waters.”

“This $7.5 million investment will improve our country’s vital fuel-efficient waterway transportation system, which makes an important contribution to exports and economic growth,” she said.

The America’s Marine Highway Program supports the increased use of the nation’s navigable waterways to relieve traffic congestion, provide new and efficient transportation options and increase the productivity of the surface transportation system, MarAd said.

“The America’s Marine Highway Program is dedicated to expanding the use of our inland waterways for freight movement,” Maritime Administrator Mark H. Buzby said. “This round of grant funding will be used to continue that expansion and ensure that our waterways are used effectively.”

The American Association of Port Authorities (AAPA) lauded the announcement.
“This program is an asset that enables ports and port communities to fully realize their potential in managing increasing freight volumes while reducing traffic congestion,” said AAPA President and CEO Chris Connor.

Other projects funded in the grant program were:

• Baton Rouge-New Orleans Shuttle of the M-55. Awarded $1,040,000, sponsored by SEACOR AMH. The grant will buy six purpose-built barges and lease a towboat to support the Port Allen to New Orleans container shuttle.

• Houston Gateway and Gulf Container on Barge Central Node. Awarded $180,000, sponsored by the Port of Houston Authority. The grant will help to fund planning and a study to provide the data necessary to establish a business case to support shipping container movements by barge between terminals.

• M-95 Fernandina Express Container on Barge Service. Awarded $1,291,800, sponsored by the Ocean Highway and Port Authority of Nassau County. The grant will support the purchase of marine terminal handling equipment for the loading and unloading of the Fernandina Express container barge service between Fernandina, Florida, and Charleston, South Carolina. MARAD said the service has potential for growth and the creation of an estimated 110 jobs.

• Lake Erie Shuttle. Awarded $1,101,735, sponsored by the Port of Monroe, Michigan. The grant will help with the purchase and installation of a crawler crane and training for it.

• Port of Morrow M-84 Barge Service Expansion. Awarded $1,623,200, sponsored by the Port of Morrow, Oregon. The grant will be used to support the expansion of barge services from Morrow to Portland, Oregon; Vancouver, Washington; and Longview, Washington; including the enhancement of two marine terminals.

• Wallops Island M-95 Intermodal Barge Service. Awarded $96,425, sponsored by the Virginia Commercial Space Flight Authority. The grant will be used to design a new trestle and combination dock/ramp to support the loading and unloading of barges and research vessels at the Mid-Atlantic Regional Spaceport.

Caption for photo: A crane lifts a container into a barge at the Paducah Riverport. A recent marine highways grant the port received is for the purchase or lease of equipment as an initial step toward beginning regularly scheduled container-on-barge service between Paducah and Baton Rouge, La. (Photo courtesy of Paducah-McCracken County Riverport Authority)