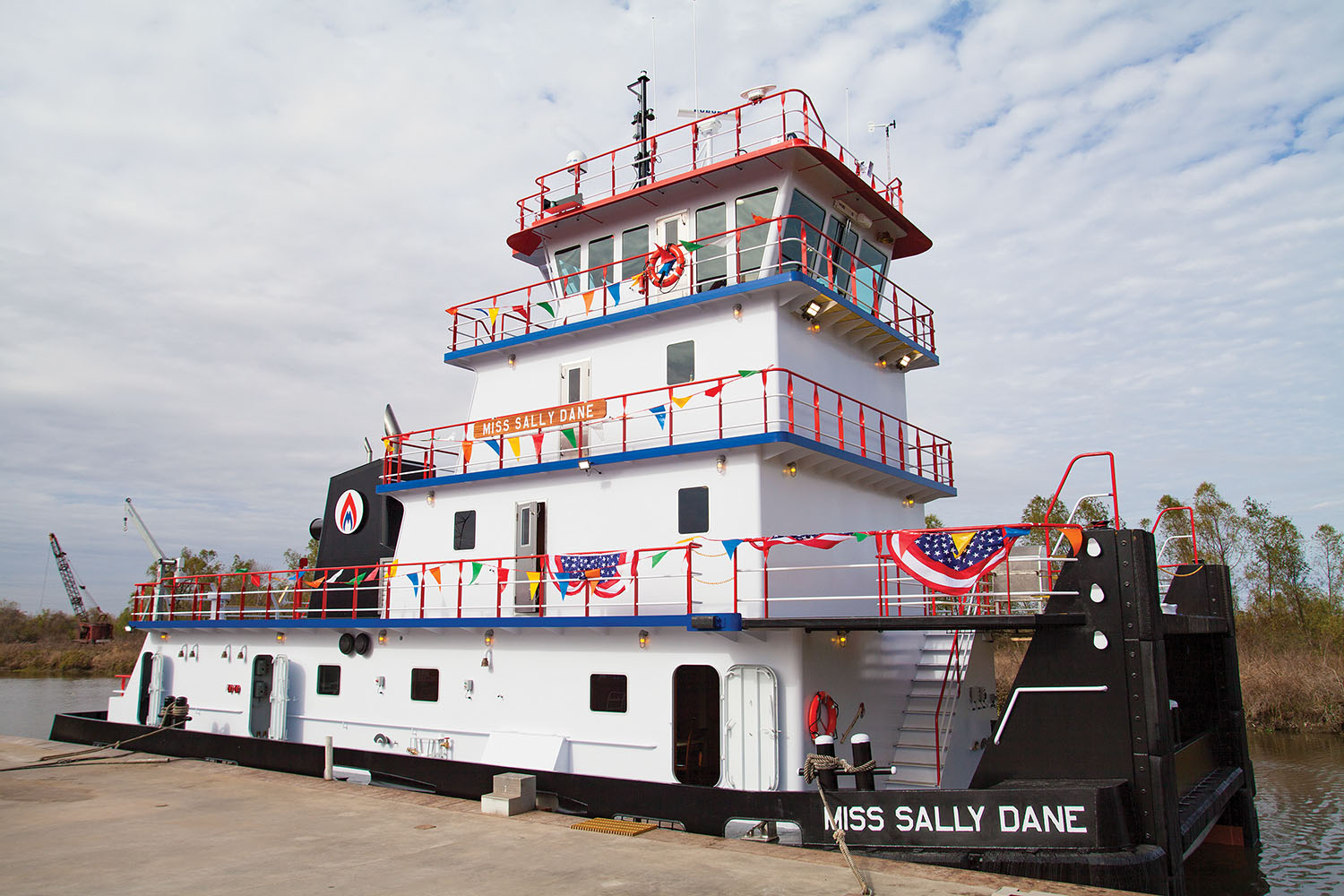 Austin Sperry, co-founder and chief operating officer of Maritime Partners, was just a “young kid” back then, living in Newport Beach, Calif.

“Not a lot of purpose but having a lot of fun,” Sperry said. “I drove to Mississippi to race sailboats, and when I got there, I saw this young lady walking around the yacht club.”

That young lady was Sally Dane, daughter of renowned shipbuilder John Dane. The two hit it off and went on a couple of dates.

“Then I ran into her dad, who saw me and said, ‘Boy, are you dating my daughter?’” Sperry recalled.

Sperry said he promptly denied everything. Not buying the denial, Dane issued a warning that most fathers of daughters would appreciate: “Good, because I’ve got a shotgun and a shovel, and you won’t be missed.”

“My romance was over,” Sperry said.

But that’s not how the story ends.

“Fast forward to 2002 and 2003,” Sperry said. “I was living in Miami training for the Athens Olympics, and she was going to university in that part of the world. The rest is history.”

The shared history of Sally and Austin Sperry now includes their marriage, Sperry joining his father-in-law’s shipbuilding team, rebuilding both the business and their home after Hurricane Katrina, Sperry and John Dane teaming up to compete in the 2008 Beijing Olympics, and, now, having five children together.

“We’ve lived through hurricanes, lost everything, been around the world, won the Olympic trials together, cried when we lost the Olympics, opened a pizza restaurant and cried when we closed the doors because we couldn’t pay the rent,” Sperry said. “We’ve been through a lot, and you’ve stuck with me.”

Sperry was speaking December 20, 2019, at Intracoastal Iron Works in Bourg, La., at the christening of Maritime Partners’ newest towboat, the mv. Miss Sally Dane, named for his wife, the mother of his children, and one of the guiding voices that encouraged him to start the company with co-founder and CEO Bick Brooks. The mv. Miss Sally Dane joins a Maritime Partners fleet of some 360 towboats and barges, collectively, under charter on the nation’s inland waterways. The company was founded in 2015.

Sperry used the moment to share the story of how his wife gave him the confidence he needed to launch out on the venture that would become Maritime Partners.

“I don’t think I’ve ever told you the time when I got fired from my job when we started Maritime Partners,” said Sperry, standing aboard the mv. Miss Sally Dane, surrounded by his wife and kids. “I was standing in line in the Sacramento airport. I called my attorney and started crying. He said, ‘What are you crying for?’ I said, ‘Not because I lost my job, but because I don’t want to let my kids down. I don’t want to let my wife down.’

“I got home, and you just said, ‘Eh, go rent some tugboats and towboats,’ and I think that’s what I needed to hear,” Sperry added. “Those experiences we’ve had over the last 20 years are why we’re standing here today.”

Speaking to the large crowd gathered for the christening, Sally Dane Sperry first heaped thanks on everyone who played a role in building her namesake vessel.

“I’d like to thank Thelma, Mr. Raymond and Peter for building this boat,” Sally Sperry said, speaking to the Vigerie family who owns Intracoastal Iron Works. “It’s beautiful. I also need to thank you for helping ‘Southernize’ my husband and uncle Bick by taking them gator hunting. The kids and I have been impressed by the pictures, and I want in on the next hunt because mama needs a new pair of boots.”

Sally Sperry was also sure to thank the shipyard crew members for their time and talent.

“I’ve been on barges and tugs and yachts, and your detail is phenomenal,” she said.

She also thanked Dave Fate, president and CEO of Stonebriar Commercial Finance, and his wife, Tasha, who were both on hand for the christening. Stonebriar was the first institution to back Maritime Partners, after more than 50 others wouldn’t loan the company the money needed to buy its first towboat. Sally Sperry also recognized Rick Freed and Martin Marine for leasing the company’s first vessel. Martin Marine is also leasing the Miss Sally Dane.

Turning her attention to the Maritime Partners team, Sally Sperry praised both Brooks, who she described as “the best partner I can imagine for Austin,” and everyone with the company.

“I think we would all say that what has taken place in the last four years is nothing less than phenomenal,” she said. “A lot of people didn’t believe in it. But with the commitment of all you guys, we got it done.”

Sally Sperry said she remembers growing up and going to christenings of boats her father had built.

“I was so jealous of the person who got to hit the bottle,” she said. “One of my favorite pictures of my mom growing up was the picture we had in the hallway. The champagne was spewing everywhere, and it was awesome.”

A month ago, on that sunny December day in South Louisiana, it was Sally Sperry’s turn to break the bottle of champagne aboard the mv. Miss Sally Dane.

Rev. Ty Van Nguyen, a priest within the Diocese of Houma-Thibodaux, then led the crowd in a prayer of blessing for the mv. Miss Sally Dane. Assisting Nguyen and reading a Psalm during the christening was Jack Sperry, son of Austin and Sally Sperry.

Sewart Supply outfitted the mv. Miss Sally Dane with its control package, while the steering system is by EMI. Fendering is by M&M Bumper Service LLC in Bourg. Thodes Electric Services Inc. of Houma, La., provided the vessel’s electronics hardware, including radar, radios and GPS. On deck, the vessel features a pair of 40-ton Nabrico deck winches and a full fleet deck forward of the main deck house.

Inside, the Miss Sally Dane offers five staterooms for a total crew capacity of seven.

“I would put this boat and the other boat against several boats that have higher horsepower,” Freed said. “We’ve actually seen it in action where we passed other boats with higher horsepower. They said, ‘How did you do it?’ And I said, ‘It’s all about the wheels and the hull.’ If it’s tuned right, you can do a lot of things with the right wheels, the right rudders and the right captain.”