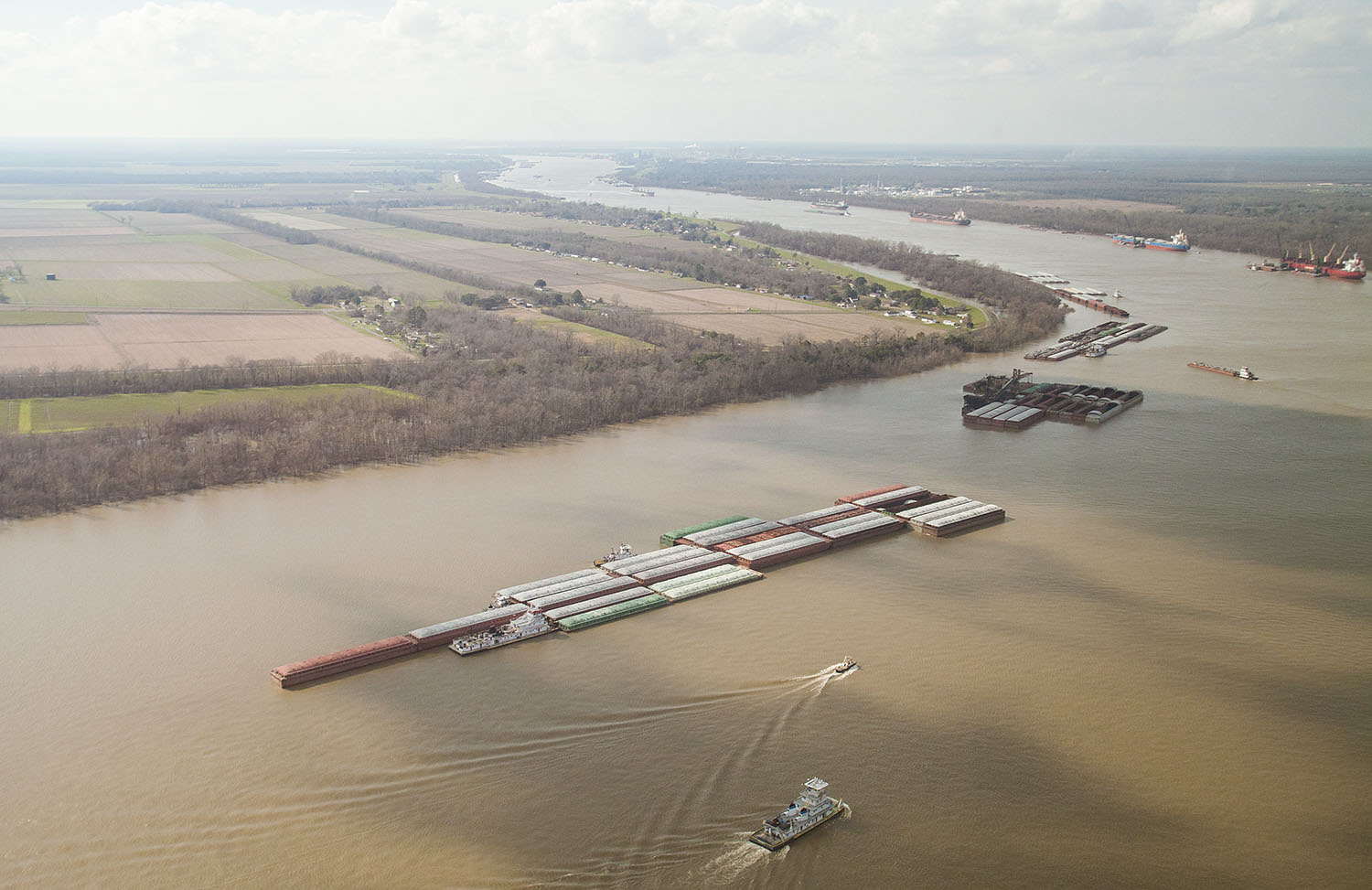 For ports, terminals and stakeholders along two of the South’s major waterways, the U.S. Army Corps of Engineers’ 2020 work plan, released February 10, marks a major milestone in the campaign to deepen ship channels to 50 feet. The Corps’ 2020 work plan includes $85.35 million to initiate the first phase of deepening the Mississippi River from the Baton Rouge, La., to the Gulf of Mexico to 50 feet. The work plan also allocates $274.3 million to initiate and complete construction of the Mobile Harbor channel deepening project in Alabama.

In addition to the more than $85 million allocated in the Corps’ 2020 work plan for deepening the Mississippi River ship channel to 50 feet, the president’s proposed 2021 budget includes just over $45.7 million for the deepening. The total cost for the project is estimated at nearly $238 million, with the state of Louisiana on the hook for around $100 million. If those totals hold true—and that line of the president’s 2021 budget makes it through Congress—the project looks to be, for the most part, fully funded.

The work plan announcement was universally praised by Louisiana’s political and maritime leaders.

“After years of hard work, I’m very glad that the Corps included over $160 million for critical infrastructure projects in Louisiana, including $85 million to deepen the Lower Mississippi River to 50 feet,” House Republican Whip Steve Scalise (R-La.) said in a statement, later adding, “The Mississippi River Basin has an unprecedented impact on our national economy, global competitiveness and American job creation. Modernizing our infrastructure and deepening the river to 50 feet will help strengthen Louisiana’s dominance in domestic and international commerce.”

Paul Aucoin, executive director of the Port of South Louisiana, which spans the 54 miles on both banks of the river between New Orleans and Baton Rouge, echoed Scalise’s message describing the Mississippi River deepening as a national priority.

“The depth of the Mississippi River is a U.S.A. problem, not a Louisiana problem,” Aucoin said. “It affects shipping worldwide.”

Through the Port of South Louisiana alone, U.S. farmers ship grains to 90 different countries, and the depth of the Mississippi River has a direct impact on the amount of grain a bulk cargo ship can carry. According to estimates, each foot of draft on the Lower Mississippi—whether a restriction below the currently-maintained depth of 45 or up to 50 feet—translates into $1 million of cargo (per foot, per ship). That’s why it’s crucial to dredge the Lower Mississippi River to 50 feet “every day, all day,” Aucoin said.

Jay Hardman, executive director of the Port of Greater Baton Rouge, praised the news and the effort that made the funding a reality.

“The Port of Greater Baton welcomes this news and is appreciative of the efforts of all stakeholders involved in this monumental accomplishment,” Hardman said. “The deepening of the river will result in continued economic expansion and growth along with ensuring that U.S. manufactured components and agricultural commodities have a strong competitive edge in the global market place. This will prove to be not only a huge win for the  state of Louisiana but the entire country.”

Brandy Christian, president and CEO of the Port of New Orleans, offered thanks to both Louisiana’s congressional delegation and the Big River Coalition, an industry advocacy group that led the campaign to secure authorization and funding for the deepening project.

“We applaud the efforts of our congressional delegation, as well as the Big River Coalition and Louisiana’s maritime stakeholders to secure the necessary funding for the future of international commerce in Louisiana,” Christian said. “A deeper Mississippi River channel will benefit ocean carriers, shippers, growers and manufacturers alike and is essential to the port’s competitiveness in the global economy.”

Sean Duffy, executive director of the Big River Coalition, said it was truly a team effort to get to this point.

“The funding for deepening has taken about a decade to achieve,” Duffy said. “There is no doubt we would not have arrived at this historic juncture without widespread support from not only the Louisiana congressional delegation but that of many other Mississippi River Basin states, along with the navigation industry, shippers along 12,500 miles of navigable waterways, the Corps of Engineers and the Louisiana Department of Transportation and Development.”

Duffy also thanked the United Soybean Board, which gave $2 million in 2019 to help offset the costs of planning, design and research into deepening the river from 45 to 50 feet. Duffy also praised the environmental impact of the first phase of the deepening project, which will focus on bringing Head of Passes and Southwest Pass to 50 feet. Beneficially used dredge material from that phase, Duffy said, will add some 1,500 acres to Louisiana’s delicate birdsfoot delta, where recovered dredge material has already built and restored more than 10,000 acres of wetlands.

After completing phase one of the project, the Corps will move on to dredging the river crossings scattered between New Orleans and Baton Rouge. Besides the mouth of the river and the handful of crossings, the Mississippi River in that area already exceeds 50 feet.

The Corps’ 2020 work plan also allocates the full federal share of the cost to deepen and widen the Mobile Harbor. Overall, the project will deepen the bar channel from the Gulf of Mexico to 56 feet and increase the bay and river channels to 54 feet. It will also widen the harbor’s bay channel by 100 feet to 3 nautical miles to allow for two-way vessel traffic.

According to the Alabama State Port Authority, commencement of the project should be rapid. The state of Alabama’s 25 percent share of the cost was secured by legislative action in 2019. Thus, engineering and design should be complete by the summer, with construction beginning late this year.

“Today marks a historic moment and victory for Mobile and the entire state of Alabama,” said U.S. Sen. Richard Shelby (R-Ala.) in a statement. “Over the last decade, I have been advocating for the deepening and widening of the Port of Mobile. The completion of this transformative project is expected to stem immeasurable economic growth and will position Alabama and the Gulf Coast region for success for generations to come.”

Jimmy Lyons, director and CEO of the Port of Mobile, expressed his thanks for Shelby’s work to make the deepening project a reality.

“His leadership in delivering an innovative and efficient program to deepen and widen Alabama’s only seaport is a game changer,” Lyons said. “We are extremely grateful for his leadership. This innovative program generates efficiencies in the Corps civil works program, affirms our project’s value to the state and the nation, and delivers the federal funding to complete our project much faster than anticipated.”

Funding for the two deepening projects comes directly from the FY2020 Energy and Water Development appropriations bill, which was signed into law as part of H.R.1865 in December 2019. The bill included language for a regional dredge demonstration program for the central Gulf Coast region from Louisiana to Alabama. The total funds set aside for the multi-year demonstration program exceeded $377 million.

According to language in the bill, the demonstration program funds will “be used for deep-draft navigation projects in the Gulf of Mexico between Louisiana and Alabama within the Mississippi Valley Division and the South Atlantic Division civil works boundaries. The Corps will select one deepening project in each eligible state for inclusion in the demonstration program.

Caption for photo: The Corps’ 2020 work plan includes $85.35 million to initiate the first phase of deepening the Mississippi River from the Baton Rouge, La., to the Gulf of Mexico to 50 feet. (Photo by Frank McCormack)