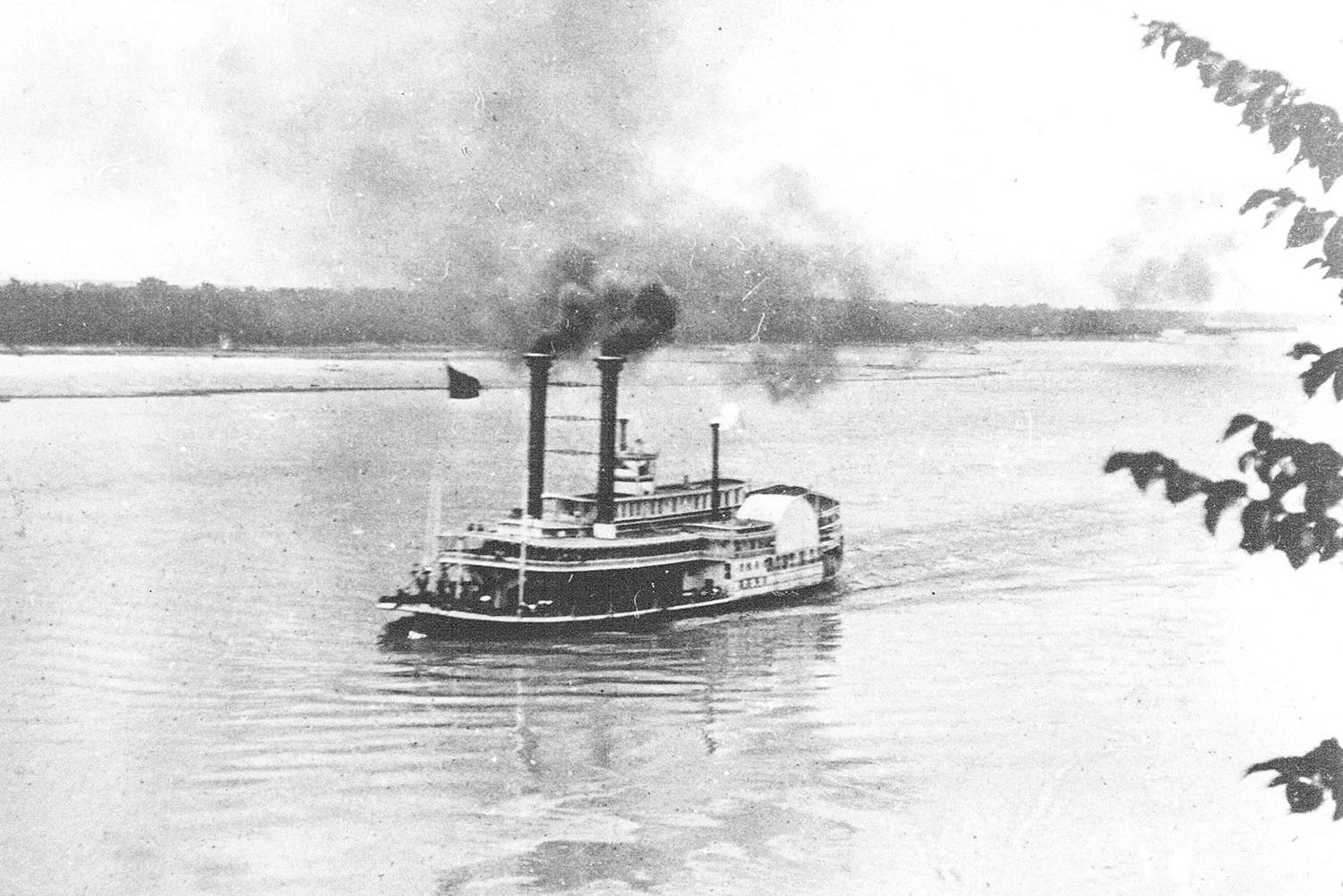 The Rob’t. E. Lee was built at New Albany, Ind., in 1866, at what was known as the lower yard of Dewitt Hill. A wooden-hulled sidewheeler measuring 285 feet in length by 46 feet in width, the boat carried eight boilers. The engines had 40-inch cylinders with a 10-foot stroke.

When locals noted the name of the famous Confederate leader being painted on the wheel boxes, it became necessary to move the boat across the Ohio to the Kentucky shore. Capt. John W. Cannon, the owner of the boat, had chosen the name owing to the fact that the riverboat was to operate in the New Orleans–Vicksburg trade.

The U.S. Steamboat inspectors signed the certificate and the boat departed for the South on October 7, 1866.

The Lee is most famous for its race with the steamer Natchez from New Orleans to St. Louis in 1870, when the boat set a record run of 3 days, 18 hours and 14 minutes, a lengthy and sometimes controversial saga in the annals of steamboating.

The Lee enjoyed a lively career with only one notable accident, occurring in the early morning hours of December 22, 1870, when it collided with the sidewheeler Potomac while passing Natchez. The Lee was so badly damaged that it was run out onto a sandbar in a sinking condition. Raised and repaired, the boat went back into operation, bringing a record cargo of 5,741 bales of cotton to New Orleans in 1874.

In April 1876, with several thousand persons thronging the levee, the Lee departed New Orleans with 60 passengers aboard, en route to Portland, Ky., for dismantling. The Washington Artillery gave the boat a 100-gun parting salute and the USS Canonicus also saluted the stately sidewheeler as it steamed up the Mississippi, receiving tributes from other steamboats and ships in the harbor. Rivermen at Memphis awaited the late night arrival of the boat with a huge bonfire as other vessels blew whistle salutes.

Upon arrival at Portland, the forecastle cannon aboard the Lee was fired twice; the first shot to honor the boat’s birthplace across the river, New Albany, and the second to mark the closing of the boat’s colorful career. After a brief time at Portland, the Lee was moved over to New Albany and dismantled, its hull taken to Memphis for use as a wharfboat. Much of the equipment was taken to the Howard Shipyard at Jeffersonville for use in the second Rob’t. E. Lee, completed early that year.

As an interesting aside, just below Vicksburg, at Port Gibson, there is a symbol with few equals anywhere in the world. Here the First Presbyterian Church spire points a golden hand to the heavens. Often touted as the most photographed church in the state of Mississippi, tourists still pause to focus their cameras on the steeple of the 1859 edifice, which is open daily to visitors.

The beautiful church contains elegant stained glass windows and has been home to two pipe organs, manufactured by the firm of Henry Pilcher’s Sons at Louisville, Ky., the first instrument shipped down the river by steamboat to Bayou Pierre.

Port Gibson is currently mourning the recent passing of Mrs. H.N. Gage, a longtime friend of this writer, who served as the church organist since 1946 and, until recently, was still playing each Sunday at age 99.

A large bell, weighing 2,032 pounds, still summons the faithful to services and strikes the passing hours for the historic town, which Gen. Ulysses S. Grant deemed “too beautiful to burn” as his troops marched through the South in 1863.

Especially of interest to river people is that three chandeliers from the cabin of the steamboat Robt. E. Lee adorn the church sanctuary. The brass fixtures, which feature the famous general astride his horse, Traveler, were a gift to the church from the William Parker family, who owned an interest in the boat and were members of the congregation.

A founder and prominent member of the church was Horatio Nelson Spencer, lawyer, plantation owner and president of the Port Gibson Bank. Mr. Spencer also was the great-great-great grandfather and namesake of Nelson “Spence” Spencer, current publisher of The Waterways Journal.

The Howard Steamboat Museum owns a stateroom door, several pieces of silver and some ornate wooden cabin arches from the Lee.

Caption for top photo: The famed steamer Rob’t. E. Lee below St. Louis on the morning of July 4, 1870, nearing its victorious conclusion of the race with the Natchez. This is the only known image taken during the race. (Keith Norrington collection)