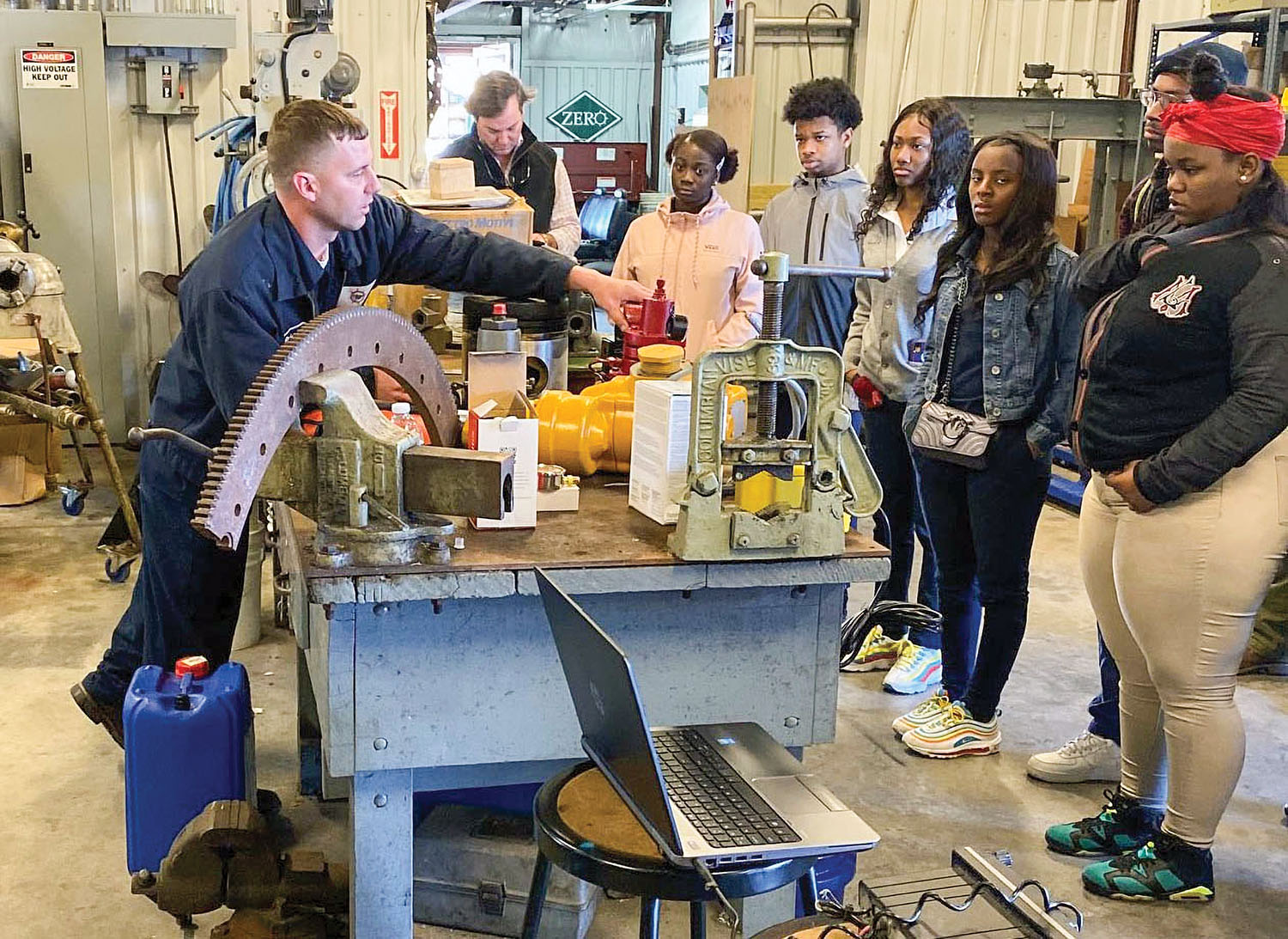 Industry Leaders Share Success Stories From ‘Who Works The Rivers’

RiverWorks Discovery, the educational outreach program of the National Mississippi River Museum & Aquarium in Dubuque, Iowa, has been sponsoring its popular Who Works the Rivers marine industry career discovery event since 2011.

Now in its 10th year, Who Works the Rivers has been held in some 15 cities, from the first event in Pittsburgh, Pa., on the Ohio River to the Quad Cities of Iowa and Illinois on the Upper Mississippi River to New Orleans, La., on the Lower Mississippi, and many places in between.

At each event, RiverWorks Discovery partners with local maritime industry partners—including shipyards, towing and fleeting companies, terminal operators and ports—and federal agencies like the U.S. Coast Guard and the U.S. Army Corps of Engineers to introduce local high school students to the career possibilities in the maritime field.

“Who Works the Rivers is a one-day event, but our goal is to build relationships between the schools and industry that last all year long,” said Errin Howard, program director for RiverWorks Discovery. “To see the faces of the students who attend and watch them soak up knowledge about our industry is so rewarding. These one-day events can really be the start of their journey to a long career in the maritime industry where they can earn good money with great benefits.”

Capt. Michael Graham is marine and maintenance director for Gateway Clipper Fleet, which offers sightseeing tours in and around Pittsburgh. Graham is also president of the Waterways Association of Pittsburgh. The city was the site of the first Who Works the Rivers event and hosts the program twice a year.

Graham recalled volunteering at a Who Works the Rivers when a student named Sam approached him and directly asked about coming to work for him.

“While we were on the boat that day for Who Works the Rivers, he came up to me and asked ‘How old do you have to be to start working at Gateway Clipper Fleet?’” Graham said. “He knew welding jobs at the shipyards started at 18. That day he walked off the boat and grabbed an application, and at the end of that school year he started.”

That student started out in service for Gateway Clipper, Graham said, then moved up to deckhand, mate and, finally, a welder in the maintenance department.

“He actually left us for the oil and gas industry,” Graham said. “He was ready to branch out.”

Graham said Gateway Clipper Fleet remains a firm sponsor of Who Works the Rivers because of how important it is to introduce young people like Sam to the industry.

“The kids either know we’re there or they have no idea there’s even a river in Pittsburgh, much less all the jobs,” he said. “We usually have 60 to 100 kids per session, two times a year. Let’s say we average 70 kids, half or 60 percent don’t really know about the rivers or the jobs we’re offering.”

“It’s been a tactic we put in place to track the success of this program,” Wood said.

Wood added that she thinks the beauty of Who Works the Rivers is that it opens students’ eyes to how multifaceted the maritime industry really is, with opportunities to work both on the water and shoreside.

“Most of the students live in a river town, so they see barges and boats, but they’ve never thought of it as a career,” Wood said. “At Who Works the Rivers, they really get a view of the complete cycle of the river industry.”

Down South, Crescent Towing, a New Orleans-based harbor tug operator with fleets also in Mobile, Ala., and Savannah, Ga., has established an internship program with the New Orleans Maritime and Military Academy (NOMMA).

Crescent Towing has long supported New Orleans’ Who Works the River event by hosting groups at its headquarters, located on the west bank of the Mississippi River in Algiers, La. While at Crescent Towing, high schoolers and their teachers get to tour a tractor tug, meet with crews and hear, in depth, about the company’s operations. It was during one of those site visits that leaders from Crescent Towing and NOMMA began discussing a formal internship program.

Crescent’s first intern from NOMMA is currently at work in the afternoons, three days a week, focusing on the mechanics of tugs. The company also plans to give the intern a taste of the logistics side of the business. The current intern plans to join the U.S. Coast Guard this summer, so the company likely will have one or more new interns in the fall.

“Our hope is to give these young people first-hand exposure to the inner workings of a real marine company,” said Keith Kettenring, executive vice president and chief operations officer of Crescent Towing. “To let them connect the dots in a sense from their studies at NOMMA to the real-world working company.

“We have high hopes for our intern program and have established a great relationship with NOMMA thanks in large part to Who Works the Rivers and RiverWorks Discovery,” Kettenring added.

Vicksburg, Miss.-based Big River Shipbuilders, a sponsor of the local Vicksburg Who Works the Rivers, has reached out to both high schools and the local campus of Hinds Community College to help students gain experience while they pursue degrees in welding, electrical and industrial maintenance.

“One such student took an internship at Big River while working on his industrial maintenance degree,” said Brad Babb, Big River Shipbuilders’ safety and compliance manager. “Before his internship, he’d actually been looking at a career as a residential electrician. After learning with us, he decided to remain in the maritime industry and is now working at another maritime company based out of Vicksburg. It is Big River’s desire to continue to help students discover the opportunities in the maritime industry and pursue a career in it.”

Upriver near St. Louis, National Maintenance & Repair Inc., a large shipyard with about 150 employees in Hartford, Ill., launched an apprenticeship program after connecting with local high schools during a Who Works the Rivers event in that area. In the 2018–2019 school year, National Maintenance & Repair welcomed two students from Wood River High School as welding apprentices. Hartford and Wood River are both located on the east bank of the Mississippi River just north of St. Louis, Mo.

“Upon graduation from high school, they were offered and accepted full-time positions with the company,” said Doug Ruschman with McNational Inc., the parent company of National Maintenance & Repair. “In this current 2019–2020 school year, that program expanded to also include Roxana Senior High School. This year, National Maintenance & Repair Inc. has one apprentice welder from Wood River High School and one apprentice welder from Roxana Senior High School.”

Ruschman added that National Maintenance & Repair also has two apprentice diesel mechanics from Roxana Senior High School. All four have expressed a desire to stay on with the company on a full-time basis after graduation.

“Having bright, energetic students in the workforce is a win-win for everyone,” Ruschman said. “Who better to spread the word about the maritime industry than these students who can demonstrate to their peers the many opportunities available. This is a program that works.”

Ceres Barge Lines’ Rodney Green was with National Maintenance & Repair when Who Works the Rivers first came to the St. Louis and was instrumental in launching the apprentice program. While volunteering with the second Who Works the Rivers event in the St. Louis area, Green met the co-op program coordinator for Wood River High School. Shortly thereafter, the pair hammered out the apprenticeship program, with the two initial students working in the afternoons in National Maintenance & Repair’s fabrication shop.

Green said that recruiting workers is a challenge all across the maritime industry. The apprentice program at National Maintenance & Repair, he said, has proven itself to be an effective way of introducing young people to the opportunities in the industry.

“Why not grow your own labor force if you can?” he said. “Give them a little exposure to what we do and the life of a shipyard worker and see if we can turn that into a career. Not everybody is going to go to college, and these students can come out of school and hit the ground running. It can develop into a job right out of high school.”

RiverWorks Discovery continues to grow Who Works the Rivers. In addition to the 15 cities that host events one or two times a year, the program will debut in three to four new cities in 2020. Each event will seek to introduce students to the people, places and jobs that make the maritime industry unique and vital to the nation’s economy.

“It’s difficult to measure the importance or success of these events, but many have been inspired to make the river their career path, and RiverWorks Discovery is so proud of that accomplishment,” Howard said. “We are always looking to improve our events as well as expand them to bring them to a town or city near you.”