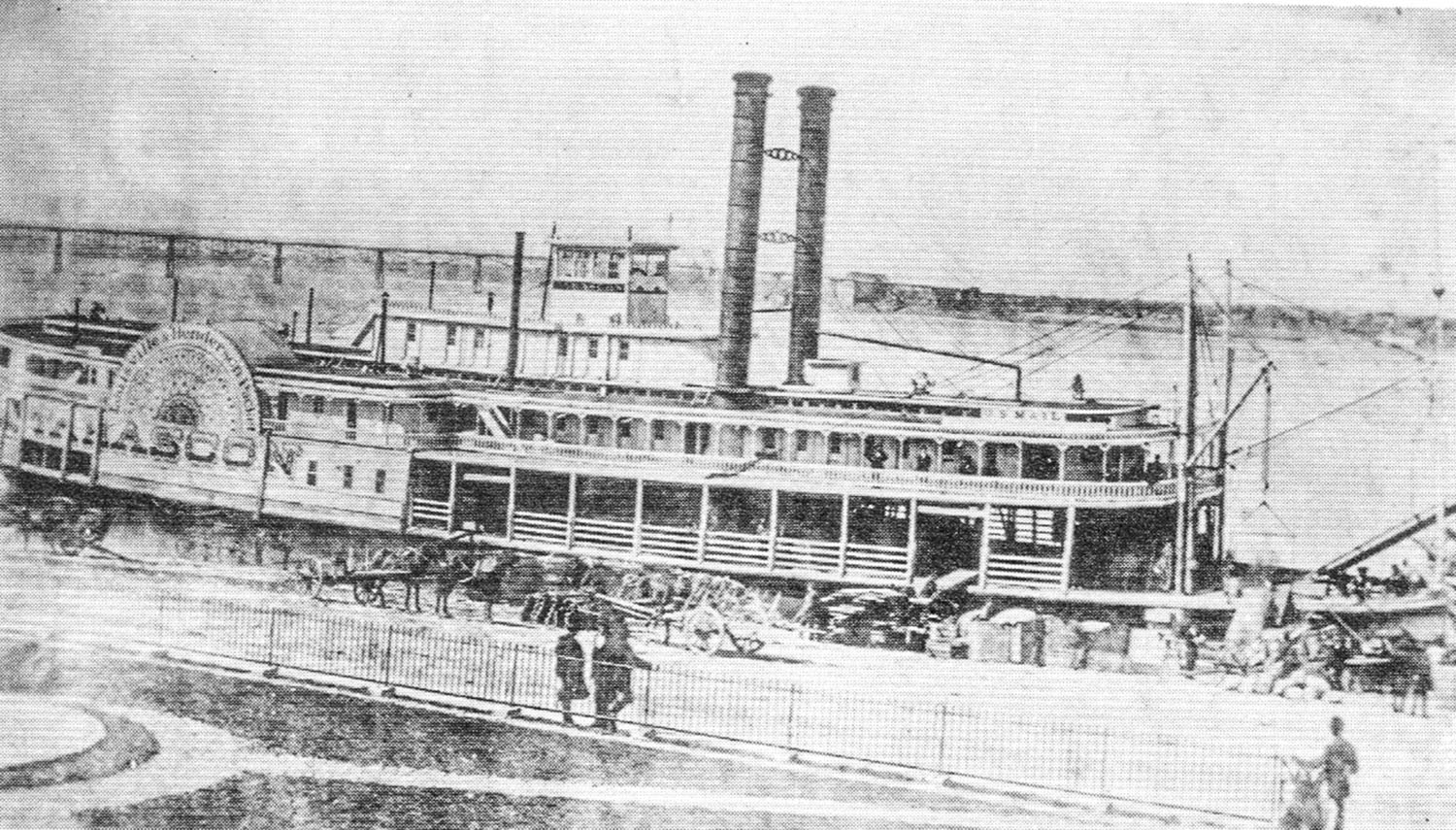 For a contract cost of $40,900, the beautiful sidewheeler Tarascon was constructed on a wooden hull 250 feet in length by 38 feet in width at Jeffersonville, Ind., in 1863 by James and Dan Howard.

The boat was launched on October 17 and departed the shipyard on December 2, headed for Evansville, where it commenced operations in the Evansville–Henderson trade. The riverboat’s initial departure from Louisville as a regular packet was on December 5.

While en route to the Tennessee River in December 1864, the Tarascon assisted in transporting General A.J. Smith’s army to New Orleans; from there the vessel was sent by way of the Gulf of Mexico to Lake Ponchartrain in early 1865. An Evansville newspaper reported on November 7, 1866 that the Tarascon had resumed its place in the Louisville–Henderson trade and had recently come into port with a large wedding party aboard.

Among those serving as master of the boat were Capt. Anson Ballard, Capt. J.A. Lusk, Capt. William Strong and Capt. David Penny.

The boat sank in shallow water, two miles below Salt River, in the autumn of 1875, but was raised and repaired.

The whistle used on the boat during its unique tenure on the river saw prior service on the sidewheel packet Eugene, built in 1860 and wrecked in 1862.

The Tarascon was retired in 1877 and dismantled two years later at Jeffersonville. A St. Louis newspaper reported on the demise of the boat and listed some of its many virtues during a remarkable career. The riverboat was selected for all kinds of service owing to its speed. A remarkable feature of the big boat was its light draft, drawing only 28 inches of water.

The machinery (22-inch cylinders with 7.5-inch stroke) was overhauled and placed on a new packet being completed at the Howard yard in the autumn of 1879.

In 1895, the Howard Shipyard at Jeffersonville produced a handsome sternwheeler named Tarascon for a contract cost of $12,250. Constructed on a wooden hull measuring 191 feet in length by 35 feet in width, the riverboat was owned by the Louisville & Evansville Packet Company. Three boilers supplied steam to engines having 15.5-inch cylinders with a 6-foot stroke.

With Capt. David Penny in command, the new vessel came out in March of 1896, running in partnership with the Tell City in the Louisville–Evansville trade. The company failed in 1910 and was reorganized as the Louisville & Evansville Transportation Company with F.A. Laidley as president and T.A. Williams the superintendent.

Reportedly, by 1913 the boat was in a deteriorated condition and was given an almost entirely new hull in 1914. At that time, Capt. J. Edgar Williams, of Evansville, was the manager. In 1917, the packet was chartered by the Valley Navigation Company, of Memphis, which was headed by R.S. Bryan, president of the Wilson-Ward Cotton Company, to run in the Memphis–Caruthersville trade.

The Tarascon sank in the Mississippi River and was lost at Cottonwood Point on the evening of December 26, 1917.