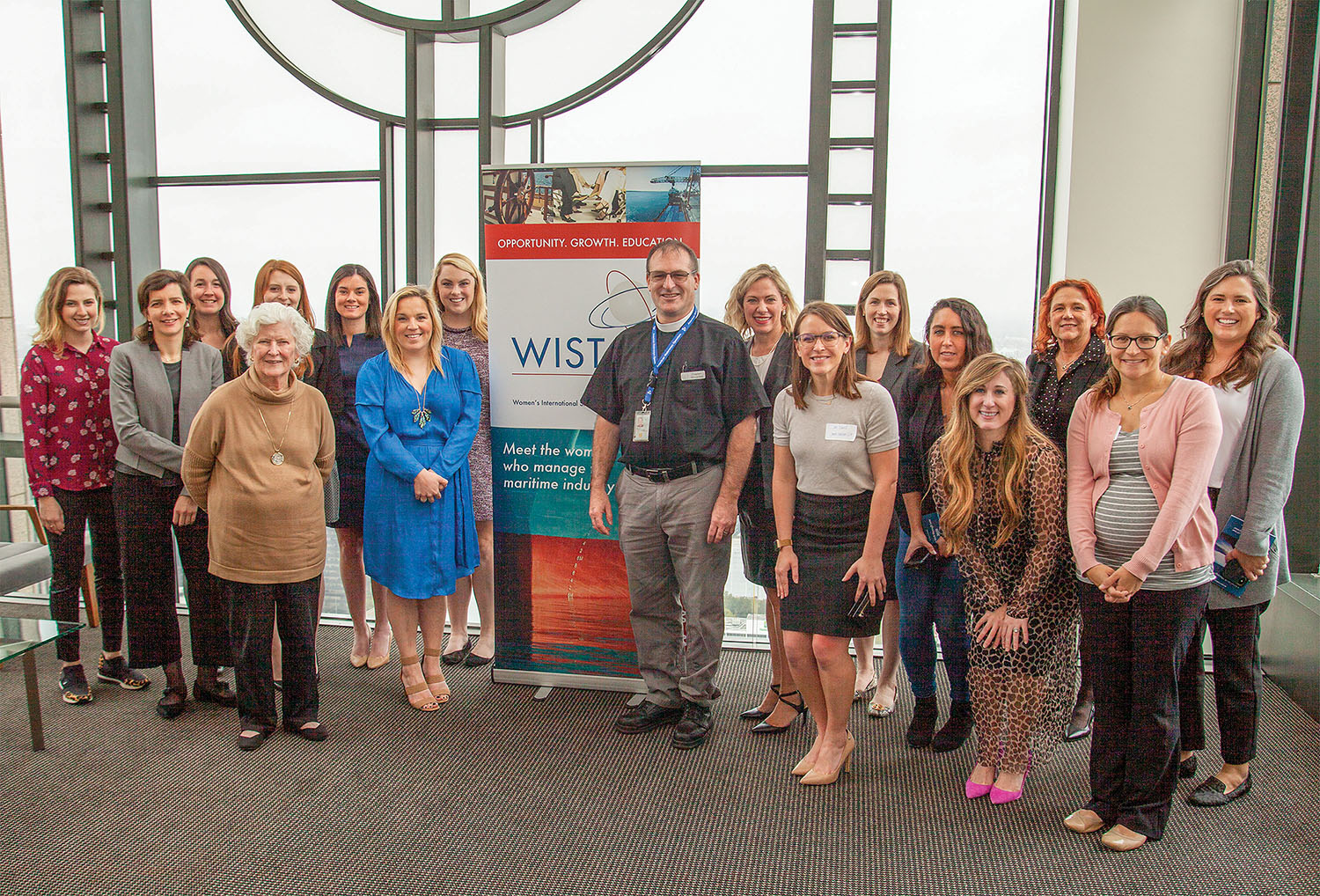 The luncheon drew close to 20 women from the New Orleans area’s maritime community who learned about Rhoades’ background in both pastoral ministry and the maritime industry and got a up-close look at how SCI and its river chaplains serve mariners at work on the nation’s waterways. Rhoades is river chaplain for the Lower Mississippi River, Gulf Coast and the Houston Ship Channel.

Rhoades opened by thanking the WISTA members present for being role models for younger women who will come after them to the maritime industry.

“I have 24-year-old and 23-year-old daughters, so that changed my worldview,” said Rhoades, who added that he wants his daughters to experience equality and opportunity for women in the workforce. “That’s why I’m glad to be invited and proud of you all for getting together and doing what you do to support each other.”

Rhoades recounted how he was raised in eastern Colorado on a farm. He moved to Arkansas when he was 16 after his father bought a ranch there.

“So we moved closer to the Mississippi River,” he said.

After earning an animal science degree, Rhoades went to seminary to prepare for pastoral ministry. Following seminary, he was a pastor in the United Methodist Church for nine years in rural Arkansas.

“I got extremely burned out and didn’t know what to do,” Rhoades recalled. “One morning my wife [Stacey] said to me, ‘I think you’d like cooking on one of those boats.’

“She was right,” he added. “I loved cooking on those boats.”

Rhoades started out as a deckhand for about 18 months before he moved into the galley. He worked for both ARTCO and ACBL.

“I could heal,” he said of his time on towboats. “I could listen to podcasts all day long.”

Rhoades credits a providential visit to Economy Boat Store in Memphis, Tenn., as opening the door for his time on the water.

“I was sent by God to Economy Boat Store one day in Memphis,” Rhoades said. “When Stacey said I should go look, I just drove to Memphis and turned into Economy Boat Store. This tall, lanky guy came up to me, and I said, ‘I’m a pastor and I really need to find another job. Do you think a pastor can get a job?’”

As it turns out, James Wilkinson, then a chaplain with SCI, had recently visited Economy Boat Store and left some Bibles and his contact card.

“I called James and said, ‘Can a pastor get a job on the river?’” Rhoades recalled.

Wilkinson replied in the affirmative, and before long Rhoades got his start working on a towboat. Rhoades said that, due to the positive impact working on the river had on his life, he’s passionate about helping others discover the career opportunities in the maritime industry.

“Because of that experience and because of what the discipline and camaraderie on the boat did for me emotionally and spiritually over the last 10 years, it really compels me to try to find people for whom it’s a good fit,” Rhoades said.

During those years on the river, Rhoades met Kempton Baldridge, senior river chaplain for SCI, who introduced him to the ministry of Seamen’s Church. In 2014, Baldridge recruited Rhoades to become a river chaplain associate, which is what SCI calls its volunteer chaplains. Then in late 2017, Rhoades began serving full time as SCI’s southernmost river chaplain. He and Stacey live in Baton Rouge, La.

“Kempton said, ‘You’ll know what to do,’ and thankfully I feel like I kind of do,” Rhoades said.

Rhoades compared the ministry of SCI to a three-legged stool, each supporting the other two. The first leg is legal advocacy. The second ministry focus is SCI’s training programs.

“Seamen’s Church since 1844 decided that good maritime skills were some of the best pastoral gifts they could give to a mariner,” he said. “So training has been central.”

The institute operates two maritime training centers, one in Paducah, Ky., and the other in Houston. Both centers offer simulators and training space for companies and individual mariners. SCI has also built an extensive e-learning system which has garnered some 10,000 subscribers, Rhoades said.

The third leg of ministry, Rhoades said, is chaplain care. Rhoades said that chaplain care includes SCI’s annual “Christmas on the River,” also called “Christmas at Sea,” which seeks to send mariners hand-knit scarves and other garments, personal letters and information about SCI. Rhoades said much of a river chaplain’s ministry involves vessel visits, both in good times and in response to traumatic events.

Rhoades stressed the importance of counseling mariners who have been through trauma as soon after the incident as possible and on the boat, if possible.

“When there is trauma, it can get stuck,” Rhoades said. “What Seamen’s Church has focused on the last eight or nine years is training up people to sit with traumatized persons and talk them through their experience and help them release that instant pressure that came on them and changed their whole body make-up. We have a long way to go with companies, not only to realize how important that is, but also how timely it needs to be.”

Rhoades related it to Psalm 23, the familiar psalm that refers to walking “through the valley of the shadow of death.”

“If you have five guys who saw someone lose their life or even a close call where nobody died, and they are saying ‘I don’t think I can ever get on a boat again,’ if you can get with them and help them talk through their experience, feel what they felt, smell what they smelled, it helps them go through the experience instead of around the experience,” he explained. “That’s when we get mentally ill, when we don’t go through the shadow of death and we usurp it and go around it.”

For more information on the Seamen’s Church Institute, visit www.seamenschurch.org. Mariners can reach a chaplain anytime by phone at 800-708-1998 or by email at chaplain@seamenschurch.org.

The WISTA New Orleans chapter’s next event will be a cocktail reception on March 12. The event will be held at Rockrose, a contemporary Greek restaurant located in downtown New Orleans in the International House Hotel. The reception, which will be held from 5:30 to 7:30 p.m., will coincide with the biennial Admiralty Law Institute, hosted by Tulane University’s law school. For more information or to RSVP, contact Barrett Rice with the WISTA New Orleans chapter at brice@joneswalker.com.

Caption for photo: The Rev. Tom Rhoades, center, with members of the New Orleans chapter of the Women’s International Shipping & Trading Association. (Photo by Frank McCormack)