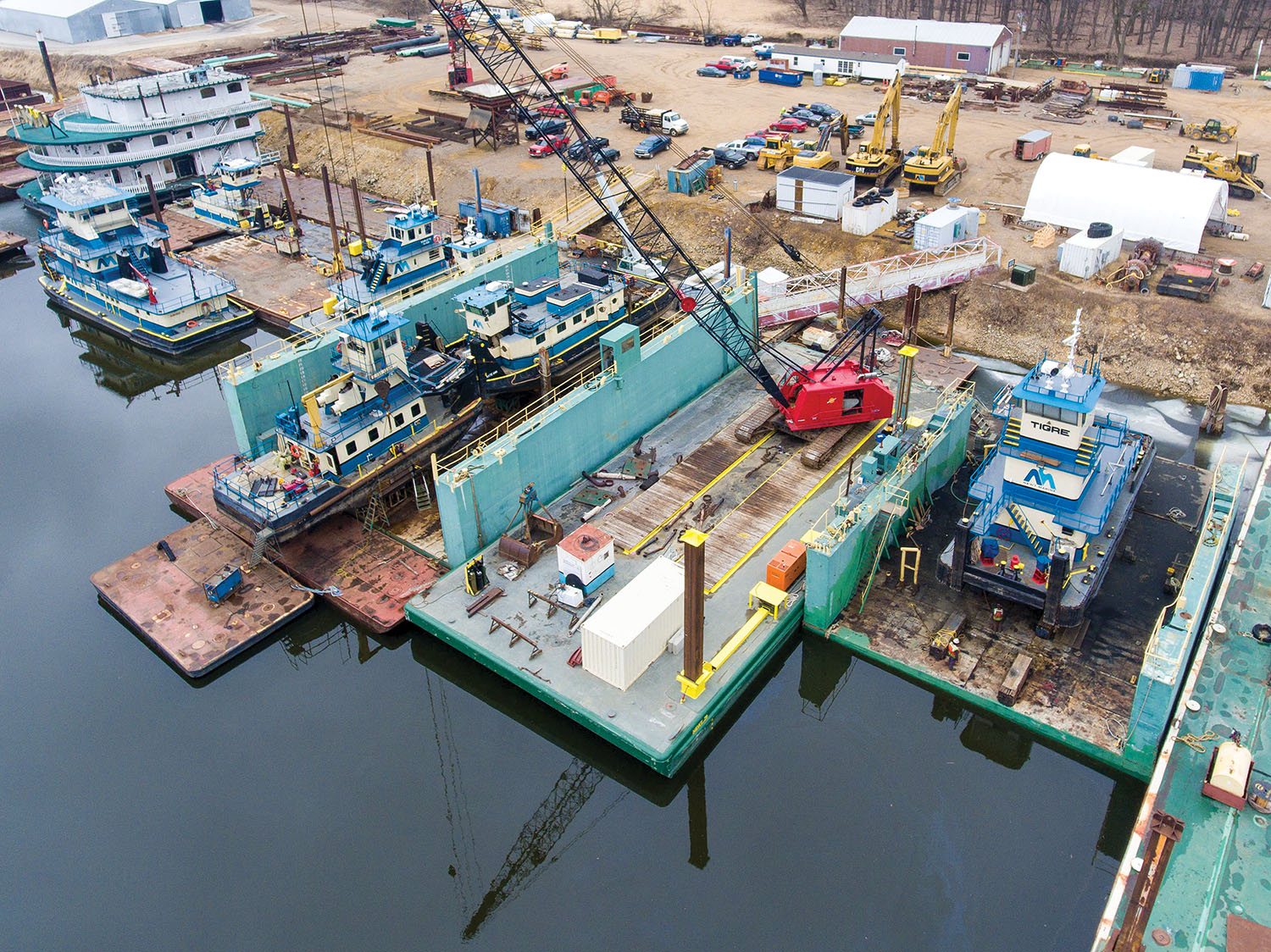 Since December, the drydocks of Newt Marine Service of Dubuque, Iowa, have been busy with three repowering projects. These are the first three of seven repowers Newt plans on completing by March 2021.

The mv. Tigre and Katie Ann are receiving two 500 hp. engines each, and the 800 hp. Fox Eldon (renamed from the Randy L. Kanipe) is getting two new Volvo D13 Tier III engines. Interstate Power is providing the engines. It’s a power upgrade; the twin-screw Randy L. Kanipe was listed at 730 hp., whereas the new engines will be 400 hp. each.

The Katie Ann was built in 1962 by Parker Bros. Shipyard in Houston, Texas. Newt Marine commissioned the Tigre in 1976; it was the last towboat built by Scully Bros at Stephensville, La., and was last repowered in 1985.

According to Artie Ahr, project manager for Newt Marine, two of the boats are 70 percent done and should be finished by the end of March.

In the course of swapping out the engines, the company made other upgrades and repairs, including adding new Fernstrum Gridcoolers. The Tier III engines require separate high temperature and low temperature cooling circuits. “We had to add an additional cooling circuit for the engines, which involved fabricating cooler boxes, new plumbing, and a significant amount of hull work ” explained Ahr. Newt Marine built the cooler boxes itself. Each vessel is fitted with gearboxes from ZF, wheels and shafts from Kahlenberg, silencers from Maxim, exhaust wrap by Orange County Thermal Industries, and new generators from Northern Lights.

Newt Marine did much of the other work itself as well, including the woodworking and new dash, ceiling, and floors on the newly reconfigured bridge, which was made fully compliant with Subchapter M. The Tigre and Katie Ann also got one new xenon spotlight each, provided by Carlisle & Finch. Volvo provided the Garmin touch-screen consoles for the bridge. “We are excited to bring the technology that Volvo offers into the wheelhouse and provide the tools that will enable our pilots to perform their work safely and efficiently,” said Ahr.

The repowerings benefitted from the assistance of Clean Diesel Grants from the Environmental Protection Agency’s Diesel Emissions Reduction Act (DERA), said Ahr. A fourth boat, the Ellen Marie, which Newt Marine plans to repower over the winter, also got DERA help.

The newly repowered mv. Fox Eldon is named after Carter Newt’s grandfather, who first came on the rivers at age 23, decking on the Federal Barge Line’s mv. Weeks in 1936.

“In 1936, how many jobs were there with opportunities for advancement?” Eldon Newt said to the writer of an article in Julien’s Journal in 1986. When the Weeks was laid up for the winter, he worked on the Eagle Point Dam, which helped prepare the way for a nine-foot channel.

Pursuing that advancement, Newt decked for seven years, switched to the engineroom and then set his sights on a pilot’s license. At that time, the test for the pilot’s license included making 10 trips on a designated stretch of river, then drawing a sketch map of it. Pilot’s licenses were issued only for specific sections of river. Newt wanted a more general license that would allow him to pilot between St. Paul and St. Louis. During the Second World War, there was a rule that no towboat master could leave the vessel unless he was relieved. The two pilots who were teaching Eldon, and who wanted a relief, told him to come back with a captain’s license ‘or don’t come back at all.’”

So Newt took the exams for all those sections of the river, taking eight nine-hour days to complete the tests. It was the first time anyone had done that, according to the article, and Newt, at 33, was one of the youngest captains on the entire Mississippi River. The feat was unusual enough for him to be profiled in the Dubuque Telegraph Herald in 1946.

Newt eventually became licensed on the St. Croix, Illinois, Ohio and Mississippi rivers and the Gulf Intracoastal Waterway from New Orleans to Houston—getting his licenses section by section.

But in the beginning, he was still inexperienced on many stretches of the river. When he knocked a hole in a barge approaching the Burlington railroad bridge, he had to fill out an accident report. For the accident’s cause, he wrote pilot error: “I was coming ahead when I should have been backing.” Summoned to the CEO’s office, he was convinced he was going to be fired. Instead, the boss shook his hand and called him “the first honest pilot we’ve ever had.”

Eldon Newt retired from operating line boats in 1968, and then, with his wife Ellen, joined  Newt Marine, which his son Gary had founded with a harbor boat he had bought. Eldon Newt continued to operate boats almost up until his death in 1994 at age 82.

In recent years, barge-building has become a growing part of Newt Marine’s business. The company builds deck and crane barges for its own use, renting them out to local construction customers in between its own jobs.

Just last year, according to CEO Carter Newt, Eldon’s grandson, the company built two spud barges, one of 120 feet long and 54 feet wide,  and another one of 120 feel long and  40 feet wide, and a 150- by 62-foot deck barge. “We’ve gotten more into the barge-building as time goes on,” said Newt.