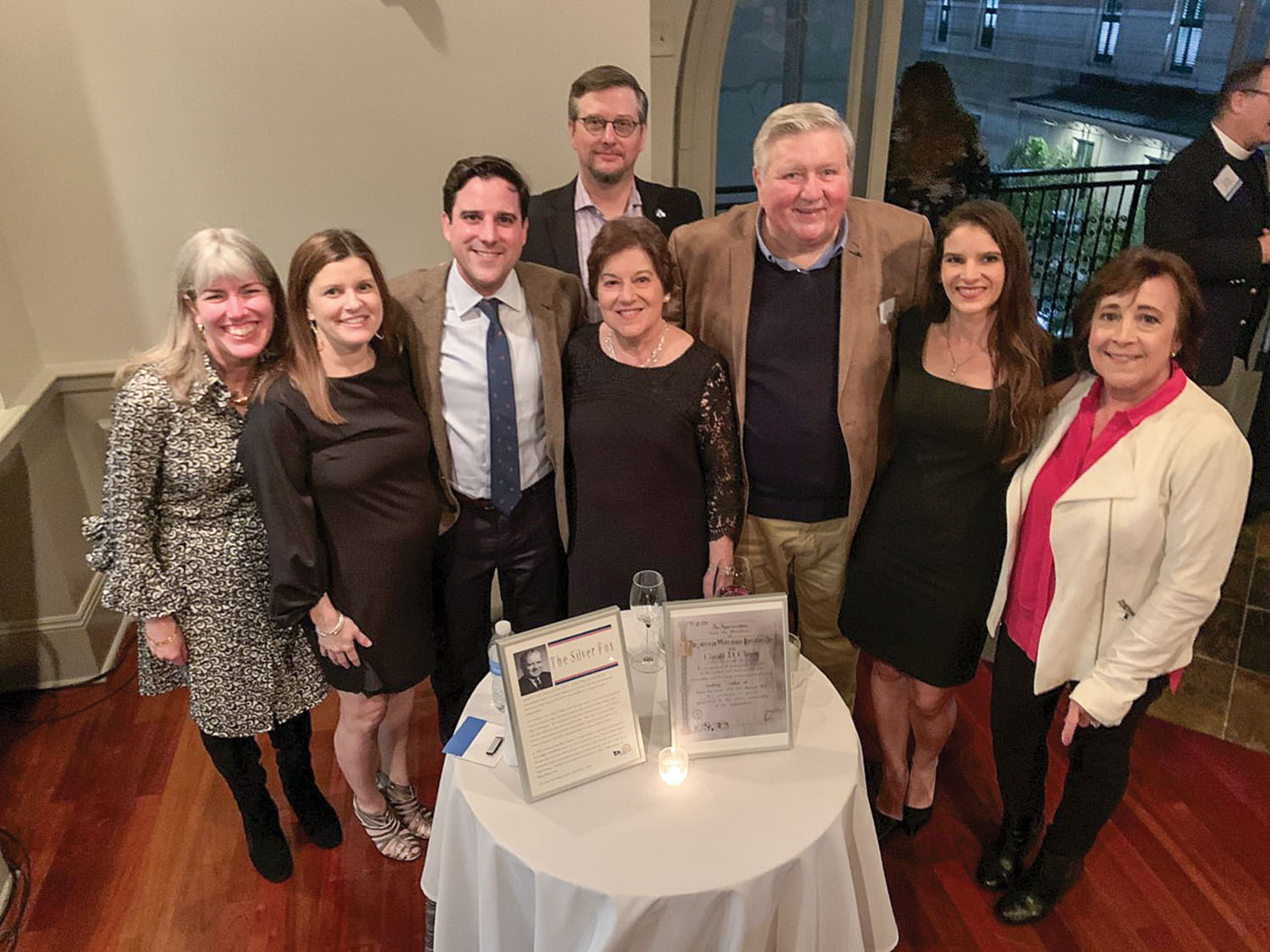 Harbor Towing & Fleeting (HTF), a well-known New Orleans maritime company that specializes in barge fleeting and tripping tows through nearby locks on the Gulf Intracoastal Waterway, is celebrating 50 years in business in 2020. Harbor Towing & Fleeting is the company that manages Star Fleet, a barge fleet located on the west bank of the Mississippi River near Algiers Point.

Gerald D. Clower, father of current company president Gerald E. “Jerry” Clower and grandfather of company CEO Todd G. Clower, formed HTF in January 1970. But as with so many historic companies that operate on the nation’s waterways, the story of Harbor Towing begins long before 1970.

Gerald Clower, nicknamed the “Silver Fox,” was born in Crystal Springs, Miss., “a country farm boy,” Jerry said. After serving in the U.S. Navy during World War II, he started out in the barge line business working for Federal Barge Line. That job would prove a defining connection for the Clower family years down the line.

Formed during World War I to quickly move supplies and equipment for the war movement (specifically on the Mississippi, Missouri and Black Warrior rivers), Federal Barge Line operated Star Fleet, which is located at Mile 91 on the Lower Mississippi River. With his job at Federal Barge Line, Gerald knew he had found his passion.

“He went to two other places, then ended up with Dixie Carriers, which was the original Kirby,” Jerry said. “He was executive vice president in New Orleans in the early 1950s.”

During his time with Dixie Carriers, Gerald also built a pair of towing vessels that he put to work independently. One pushed clean barges, and the other transported black oil to a refinery near Birmingham, Ala.

But in 1955, Gerald had a decision to make regarding his future in the maritime industry: transfer away from New Orleans or part ways with Dixie.

“He was invited to move to Houston for a promotion, but my mother wanted no part of it,” Jerry said. “Number one, she didn’t want to go to Houston, and she sure as hell didn’t want to leave New Orleans.”

Gerald chose his New Orleans roots over relocation and resigned from Dixie to focus on operating his two towboats.

“Then in about 1962 or 1963, he sold off the equipment and went into business with a friend of his who had Star Fleet, which was originally a Federal Barge Line fleet,” Jerry said.

By the start of 1970, Gerald’s partner in the business wanted to focus on barge transport, while he preferred the fleet, so Gerald bought the fleeting side of the business and became the sole operator of Star Fleet.

But that was before his father launched Harbor Towing & Fleeting. In 1968, when Jerry graduated and needed a job, there wasn’t a position available at the family business.

Instead, Jerry spent about 15 years working in engineering and sales for Union Carbide. But when the maritime industry — along with much of the nation’s economy — took a nosedive in the early 1980s, Jerry came back to the family business in 1983 to work alongside his father.

“I could see he needed some help, so I basically took a pay cut to come in and even missed a few paychecks,” Jerry said. “But you do what you gotta do. He was still there for a couple or three years, and then age just caught up with him.”

With Jerry at the helm of Harbor Towing & Fleeting, Gerald had an active role with the company up until the time of his death in 1998 at the age of 86.

Fast forward to 2005, and Harbor Towing & Fleeting was in the midst of another crisis, only it was a natural disaster. Hurricane Katrina made landfall in Southeast Louisiana and Coastal Mississippi on August 29, 2005, destroying much of the area and toppling levees in and around New Orleans. HTF’s office near the lakefront of Lake Pontchartrain in New Orleans flooded in the storm, and the fleet was a wreck.

“We got wiped out in Katrina,” Jerry said. “We had spar barges with deadmen in the batture — gone. I proceeded to do everything I could to recapture land, to start a building program. But it was permit upon permit. And of course the city was in disarray too, so I didn’t get much done the first couple of years.

“I kept running the boats,” he added. “We were dispatching from the boats, because we didn’t have a fleet operation.”

And that’s when Jerry reached out to Todd, who had graduated from Texas Christian University in 2004 and moved to Boca Raton, Fla., for work.

“As the process of permitting started to materialize, that’s when he called me to come back,” Todd said. “I told him, ‘I don’t know. Let me think about it.’ He says, ‘OK, well, I need to know by 8 a.m. tomorrow morning.’”

That was 2008, and the urgency was the company’s Responsible Carriers Program (RCP) audit was coming up. Todd, just as Jerry did in 1983, returned to his family’s business to help lead it through disaster. In those first few months, Todd worked closely with Kevin Gilheany of Maritime Compliance International to learn the regulatory, compliance and crew management side of the business.

“It was a great program, and Kevin and I became very close through that,” Todd said. “He was a great mentor.”

Todd led the effort to update the company’s safety management system, while he split time between Florida and New Orleans in 2009. In 2010, he moved back to New Orleans full-time. By Thanksgiving Day 2010, Harbor Towing & Fleeting reopened Star Fleet. The company also moved into an office building in nearby Metairie. In the years since, HTF has built out three more office units and rebuilt its web presence.

In 2012, Todd also oversaw renovations to the mv. Todd G, one of HTF’s four towing vessels. He said the hands-on experience taught him a lot about the construction process, the systems aboard towing vessels and what it’s like to live on a workboat.

“That was really a fantastic experience,” he said. “And I had to learn it, because at that point, it was my money and my time and my project, whether or not I knew what I was getting into. What better company to invest in than my own family company?”

The other vessels in the HTF fleet include the mvs. Wendy C (named for Todd’s sister), the Pamela Ann (named for his mother) and the Silver Fox (in honor of his grandfather).

Katrina also afforded the Clowers the opportunity to rebuild and reimagine their fleeting operation.

“I think Katrina was such a blessing in disguise,” Todd said. “I think everyone recognizes that now. To have the opportunity to start the fleet from scratch — we weren’t trying to retrofit anything.”

Jerry and Todd designed an elevated dispatch office out of a climate-controlled shipping container, along with what they call “the Habitat,” a self-sufficient unit with sleeping quarters, laundry, galley, head and separate water supply. Between 2010 and 2015, the Clowers grew Star Fleet’s size from 2,000 linear feet to 4,000, along with a 30-year lease with the Port of New Orleans.

“We can fleet about 40 tank barges,” Todd said. “We can take a mixture, but tank barges make up about 95 percent of what we do.”

The company is also in the process of building out a second shoreside office near the fleet in order to enhance training space, parking, site security and access.

One of the defining qualities of Harbor Towing & Fleeting is the loyalty and longevity of its crew.

“We have captains who’ve been with us since I was a little kid,” Todd said. “Jimmy Baer, our port captain, has been here 38 years. I’m 38 years old. These are longstanding relationships, and they know how we operate. We treat them like family, and we treat their families like family.”

In fact, the longest-serving member of the HTF team is family: Jerry’s sister-in-law, Debbie Wills, who started helping Gerald in the office in 1971 when she was still in high school. She joined the company full-time in June 1976.

Besides longevity of the team, Todd said another thing that sets HTF apart is its focus.

“We do this, and it’s what we do really well,” he said. “I’m not trying to branch out into things that are outside of my wheelhouse. We do what we do, and we do it really well.”

Still, Todd said he joined the company in 2008 with the understanding that he wanted to grow the business. In his decade-plus with the company, HTF has grown its vessel fleet and its footprint. It’s also added to its team, namely Michael Nation, vice president of operations and compliance for HTF. And Todd said there’s more to come in the months ahead. Jerry said it’s exciting to be part of that growth and to see his son succeed, just as he did so long ago.