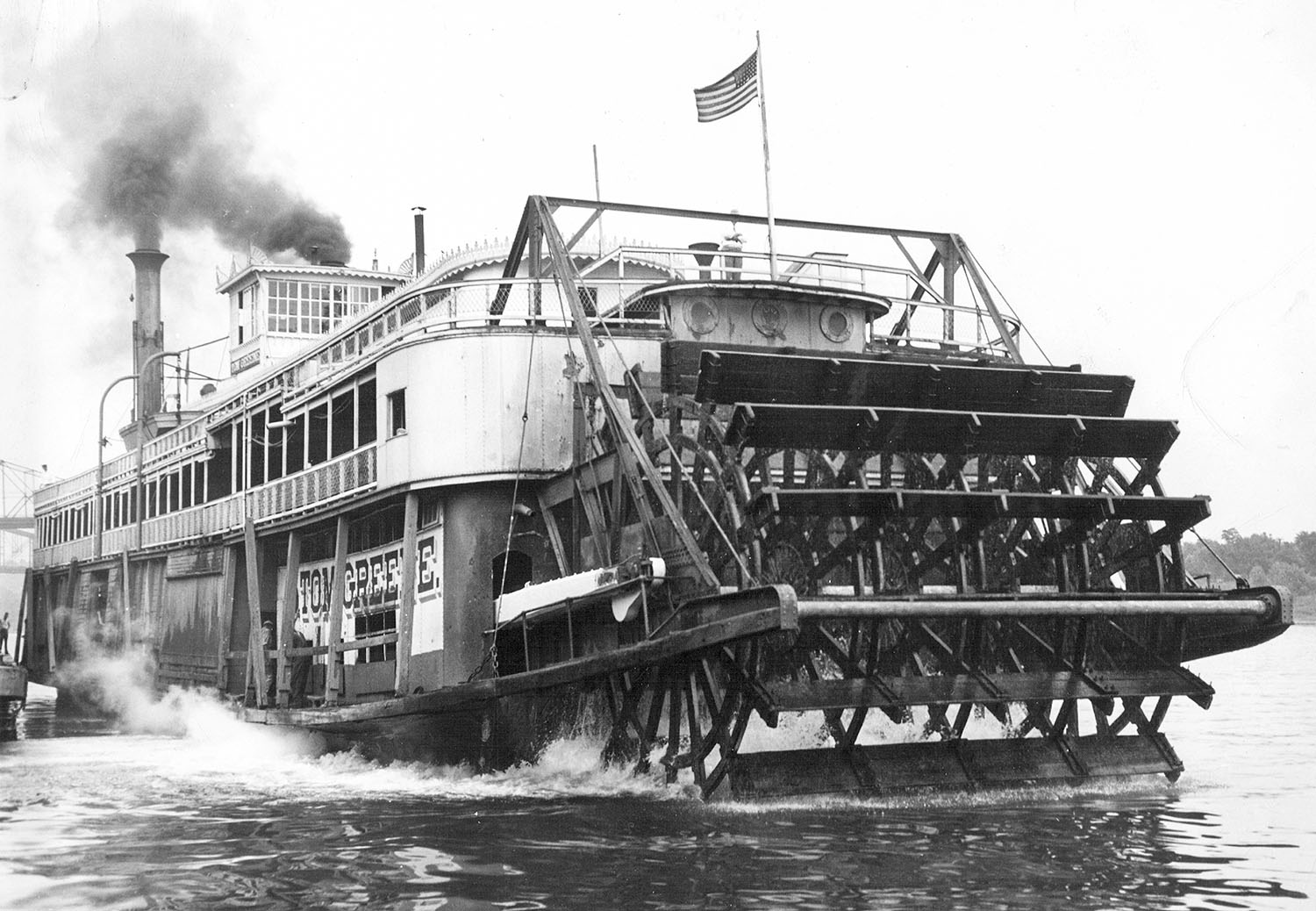 In 1923, Greene Line Steamers contracted for the company’s first steel-hulled vessel, built by the Marietta Manufacturing Company at Point Pleasant, W.Va. Constructed for the Cincinnati–Huntington trade, the hull of the boat was 200 feet in length and 38 feet in width, with a depth of 6 feet. Four boilers supplied the steam to engines having 22-inch cylinders with a 7-foot stroke.

Capt. Gordon C. Greene, owner of the firm, was the steamboat’s first master. Greene once remarked to his colleague and good friend, Capt. Volney White, that, “When I die, Stogie, I want to go home on that boat.” When the beloved captain passed away in 1927, the Tom Greene was laid up undergoing boiler repair. A loving crew worked around the clock to get the sternwheeler back into operating condition in order to carry out the captain’s last wish. Greene lay in state in the cabin of the boat as it headed upriver on the crest of the flood, en route to Newport, Ohio. It was reported that hundreds of people turned out at landings along the way to pay tribute.

Following his father’s passing, Capt. Thomas Rhea Greene, for whom the boat was named, became master, running the boat in the Cincinnati–Pomeroy–Charleston trade in conjunction with the steamer Chris Greene.

The Tom Greene made national newspaper headlines in 1929 (and again in 1930) when it raced the steamer Betsy Ann, of which Capt. Fred Way was owner and master. The Tom, as it was usually called, was victorious in both challenges, although in some river circles controversy remained as to the winner for many decades after the event; some still argue about the outcome of the 1870 race between the Natchez and the Robt. E. Lee!

In May 1931, the Tom Greene was entered into the Cincinnati–Louisville trade. As the passenger and freight business waned, the rooms in the cabin of the boat were removed in October 1936 to make space to carry new automobiles.

The riverboat was taken from Cincinnati to the Dravo Marine Ways at Neville Island, Pa., in March 1939 for extensive hull work. Capt. Jesse P. Hughes, chief pilot of the Greene Line, and Capt. Fred Way delivered the boat in 51 hours.

The Tom was sold to Commercial Barge line at Evansville, Ind., on November 1, 1950. Plans to convert the steamboat into a triple-deck automobile carrier never came to fruition, and it was sold to the Walker Boat Yard at Paducah, Ky., for use as a landing and office barge. Capt. Tom Greene passed away in 1950 (after suffering a heart attack aboard the Delta Queen at Evansville, Ind.) at the age of 46.

In 1992, the remains (main deck and hull) of the Tom Greene were purchased by Capt. Bob Harrison and moved to Melbourne, Ky., (Ohio River Mile 458.5) to become a restaurant and marina headboat.

In the early spring of 2000, this writer and river historian Judy Patsch, through the courtesy of Capt. Harrison, enjoyed a visit to the beached hulk of the Tom, shortly before it was scrapped. Ironically, also on the Harrison property, lay the beached hull of the Chris Greene (1925–1950), which had also been used as a marina; the two sister steamboats together again for one final time.

Caption for top photo: The Tom Greene backing away from a wharfboat. (Keith Norrington collection)