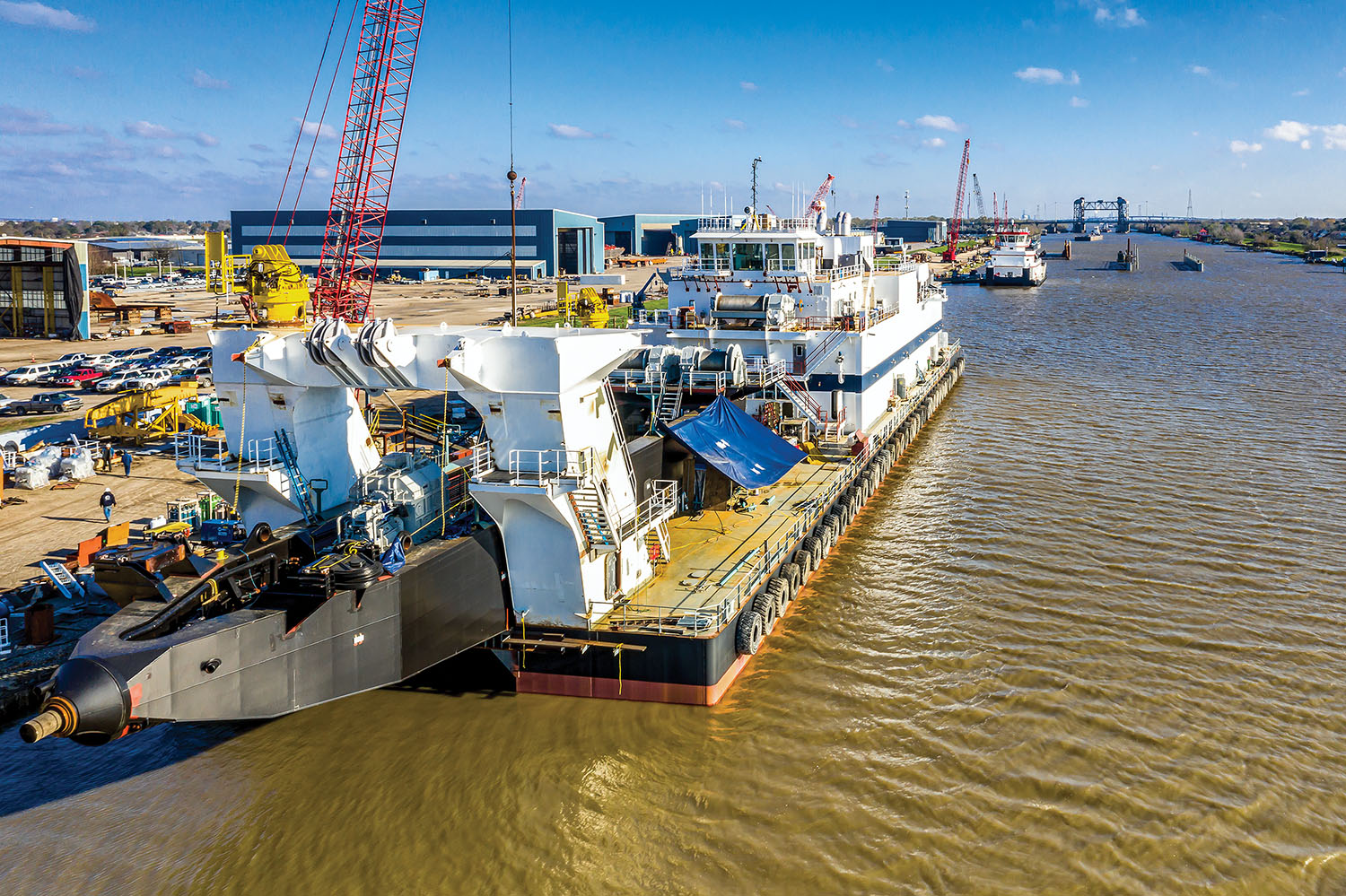 The U.S. dredging industry’s newest cutter suction dredge, Callan Marine’s General MacArthur, went to work in April for a private client in the Port Arthur/Beaumont, Texas, area. The dredge with 24,000 hp. and 31.5-inch pipeline diameter—both the largest in the country—was launched in December 2019 from Belle Chasse, La., where it was built at C&C Marine & Repair.

The General MacArthur started its first project on April 28. Upon completion, the dredge will head to Louisiana and then Corpus Christi, Texas. On April 9, the U.S. Army Corps of Engineers Galveston District awarded a $97.9 million construction contract to Callan Marine to complete the second phase of the four-phase Corpus Christi Ship Channel Improvement Project.

“It is undeniably a game changer for the dredging industry and Callan Marine, allowing faster and more efficient project completion across our scope of clients,” Callan Marine President Maxie McGuire said.

The General MacArthur joins Callan’s other cutter suction dredges: the 18-inch General Pershing, the 16-inch General Patton, and the 12-inch General Eisenhower. McGuire and Callan owners are all veterans, and the branding has a story to tell about the operation.

Looking up at the wall with all the photos and biographies of the generals, Elizabeth Rogers-Alvarado, marketing director, said: “Each one of those generals had a management and leadership style, and those values are reflected in the company.”

For the General MacArthur, Callan acquired Bean Coastal LLC at the end of 2017, taking over the company and the dredge build. McGuire worked for Bean from 1997 to 2005, and his relationship remained strong with Ancil Taylor of Bean. In 2017, Taylor came to McGuire about Callan’s interest in expanding the company and acquiring the design for the new dredge, which Bean had been working on since 2015.

McGuire said Callan saw the need for a larger dredge. “For one, the deepening and widening of the Panama Canal has allowed ships to get bigger in width and draft,” McGuire said. U.S. ports are competing to deepen and maintain their competitiveness. McGuire said that the dredging industry saw strong demand in the late ’90s to mid-2000s, then demand slowed for 10 to 12 years, and it is now ramping up again.

In the Gulf Coast region, funding in Louisiana for coastal protection projects is driving huge investment, on top of maintenance dredging and beach renourishment. Many ports in the area are also in the midst of deepening projects. McGuire said the dredging schedule in those regions is often dictated by environmental windows and high water on the Mississippi River. Typically, dredges went to work in the Gulf during the high-water season and worked the river during the winter. Now, with numerous channel deepening projects at ports in the area (at Corpus Christi, Brownsville and Houston), the market needs more available contractors.

“We looked at that analysis, and we knew the time was right,” McGuire said.

The General MacArthur is fuel-efficient and produces fewer emissions than comparable vessels. The 290-foot dredge has a 9-foot draft and is powered by three CAT-MAK diesel engines with a fuel capacity of more than 300,000 gallons. The engines run the diesel/electric system, which powers generators that can run electric to operate the dredge.

The dredge can also run off shorepower, which is at least half as expensive as direct-drive diesel. The diesel/electric system is more efficient yet, but the shorepower setup could help decrease emissions where regulations might require it.

With a dredging depth range of 90 feet, the dredge is also ready to perform deep draft dredging and projects from coast to coast. It will perform capital, maintenance and coastal restoration dredging work.

“With its combined scope, power and accommodations, we will see the project speed and quality increase at unprecedented rates,” McGuire said.

Historically, Callan has focused on what it calls the “middle market” of the dredging industry, a niche underserved market along the Gulf Coast.

“In many cases, this market is too small for the large dredgers and has barriers for smaller companies,” McGuire said.

The General MacArthur will help serve this niche middle market and has the capability to do larger deepening or offshore projects. In that Gulf Coast middle market, Callan serves many of the largest oil and gas industry companies in the Gulf Coast region. Having come from the big industry dredging contractors, McGuire wanted to bring that same focus on quality and safety to middle-sized Callan Marine. While those Gulf Coast customers don’t dredge large volumes, they dredge quite regularly. “That’s the middle market,” McGuire said. “Our advantage has been that this area is home. We have a large client base and have developed a niche, quality offering,” McGuire said.

Callan Marine is a Texas-based, family-owned dredging contractor, founded in 2009, working for private and public clients.