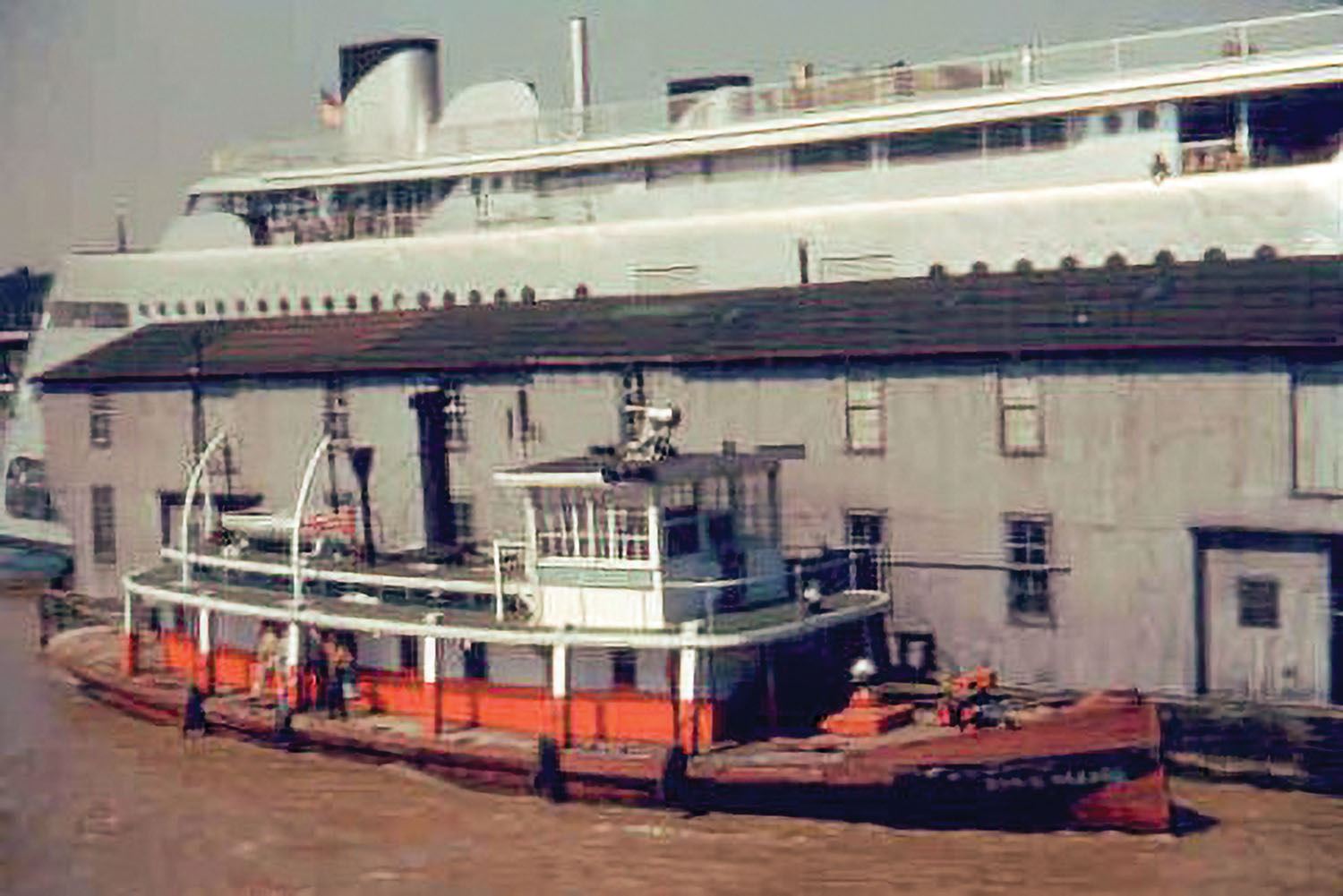 A familiar sight in the St. Louis harbor for nearly seven decades was the steam tug Susie Hazard.

Built in 1891 at St. Louis for the Southern Coal, Coke & Mining Company of that city, the vessel had a sturdy iron hull measuring 97 feet in length by 19.1 feet in width. Two boilers provided the steam for twin high-pressure engines having 17-inch cylinders with an 18-inch stroke, driving a single propeller.

Capt. J. Ray Parker, who had served as St. Louis harbormaster, was long the master. By 1927 the Susie was in the command of Capt. Robert A. Pennewell with Sam P. Simon serving as chief engineer.

The boat was sold to the Steamer Service Company, a subsidiary of Streckfus Steamers Inc., in 1939 to perform various duties in the harbor. In numerous still images and in vintage film footage, the tug is seen assisting the large excursion steamboats of the Streckfus Line as well as the tourist steamer Golden Eagle. The late Capt. Bill Carroll, longtime master of the excursion steamer Admiral, told this writer that he often had charge of the Susie on various assignments and that his wife, Betty Streckfus Carroll, frequently went along as his cub pilot.

For a small boat, the Susie had an unusually large pilotwheel of about 9 feet in diameter. Having the distinction of being the last steam tug operating above Baton Rouge, after many years of faithful service, the Susie was stripped of all salvageable parts, towed downriver to Beard Island Light Dike at Upper Mississippi River Mile 163.5. and unceremoniously scuttled on November 12, 1958.

The large pilotwheel of the Susie was purchased by St. Louis educator and river historian Ruth Ferris, who at the time was curator of the river collections at the Missouri Historical Society. Too large to fit into Ferris’ home, the artifact for many years was displayed in the society’s Port of St. Louis Gallery and later in the larger and elegant River Room, which opened in May 1962, with the generous support of Capt. Donald T. Wright, then publisher of The Waterways Journal.

Today the wheel is part of the Ruth Ferris Collection of River Life and Lore at the Herman T. Pott Inland Waterways Library of the Mercantile Library, housed at the University of Missouri-St. Louis. It is currently on display as part of an exhibit at the Missouri History Museum in St. Louis, “Mighty Mississippi,” which runs through April 18, 2021, and emphasizes the important role the river has played in the history and culture of St. Louis.

An excellent radio-controlled model of the Susie has been built by two St. Louis riverboat enthusiasts, Fr. Tom Keller and Darin Schuld, who are members of the St. Louis Admirals model club and have constructed numerous other fine models of steamboats.

Images of the St. Louis harbor often show a steam tug that is sometimes mistaken for the Susie Hazard. The vessel in question is the Colorado, a propeller tug built at St. Louis in 1891, the same year as the Susie. Constructed as the Archie Parker, its wooden hull measured 70 feet in length by 15 feet in width. In 1898, it was renamed Ella St. Clair before

becoming the Colorado in 1903 and listed as an excursion boat, most likely to handle small cruises. Owned by the Eagle Packet Company, the tug was again classed as a towboat in 1905 and operated into the 1920s, when it was dismantled at the St. Louis levee.

Caption for top photo: The Susie Hazard alongside the Streckfus work barge and the Admiral at St. Louis. (Keith Norrington collection)