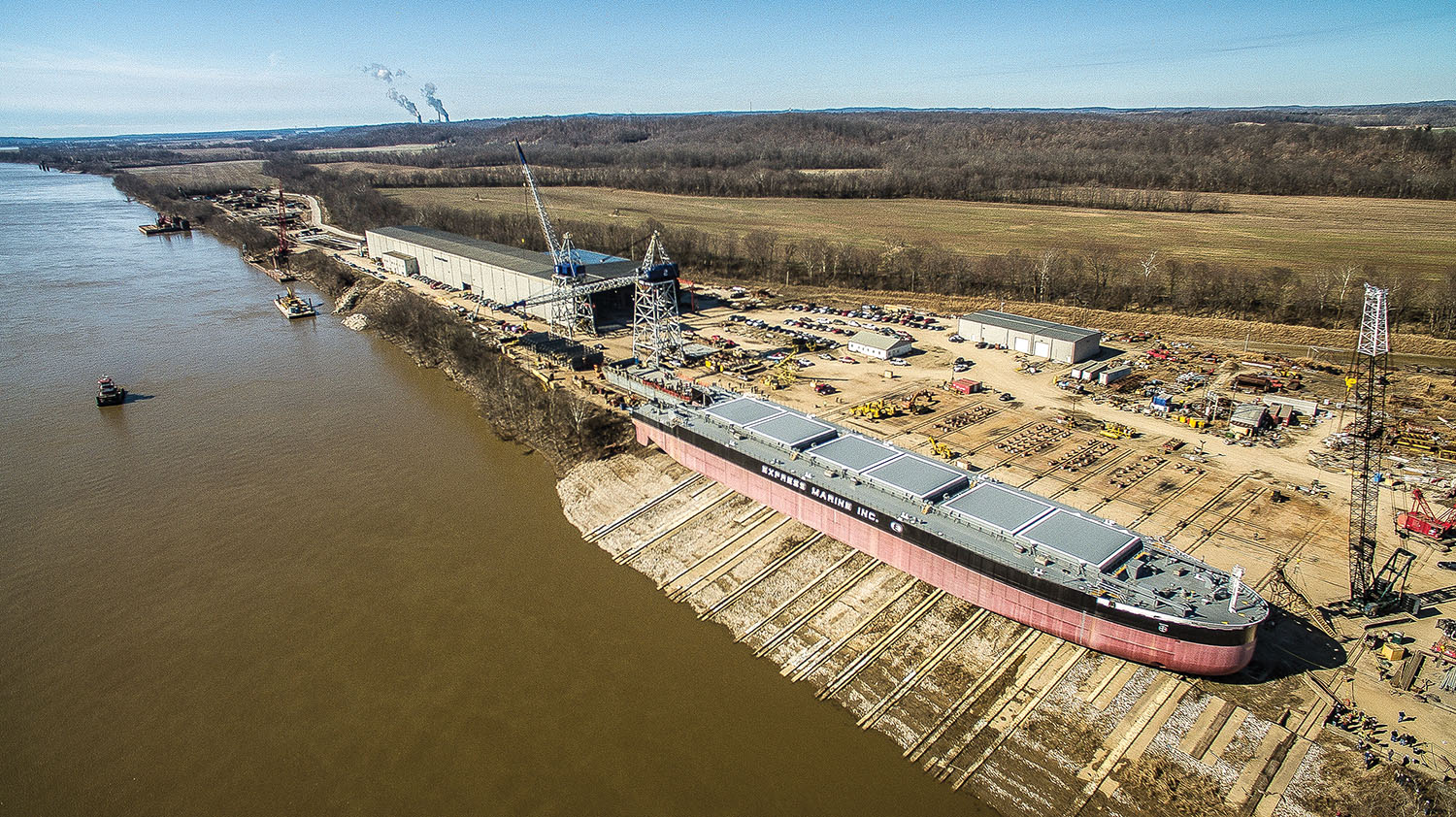 What are now two shipyards, located some seven miles apart on the Ohio River, began over 50 years ago as a father-son operation centered around a single coal dock. Thus, Corn Island Shipyard and Tell City Boat Works owe their beginnings to a coal business once owned by Mason Foertsch and his son, Don.

The elder Foertsch excavated lakes and golf courses with heavy equipment, which subsequently enabled him to lease property to excavate coal.In 1973, after Don finished college, he and his father started in the coal mining business, eventually loading coal onto barges from their new dock in Grandview, Ind.

Concerned about the cyclical nature of the coal business, they began looking for ways to diversify, which led them to the idea of building barges. They began gradually piecing together a shipyard at the same location as the dock, Mile 734, from equipment they found at auctions during the 1980s when some of the industry yards were forced out of business.

“Assembling the shipyard took a lot of time,” said Don, but finally in February 1991, Corn Island Shipyard launched its first barge, a 120- by 50- foot crane barge.

The company’s biggest break, said Foertsch, came three years later, in 1994, when a naval architect and marine engineer with vast experience in the river industry, the late F.M. “Bud” Johnson, joined the company as general manager. Over the years, Johnson designed and oversaw the construction of barges, tugs, dump scows and many blue-water vessels, some of which exceeded 5,000 tons, for clients across the United States.“Because of him, we gained a solid reputation as a quality builder,” Foertsch said. “’Sadly, Bud died in 2017.”

Currently, Corn Island keeps a crew of 70-plus welders, fitters and shipwrights busy. To meet the growing demand for its boats and barges, the company leased a second site upriver, Tell City Boat Works, at Mile 727, which occupies the old Maxon Marine yard. It launched its first barge in 2009.

Through the years, Corn Island Shipyard/Tell City Boat Works has built a range of custom vessels varying from 500- by 108-foot casino barges weighing 4,500 tons each to ATBs carrying heated asphalt at capacities of 80,000 to 110,000 barrels. The combined yards, tucked into the hills of Indiana on the banks of the Ohio River, have also been able to support the dredging industry with dredges and dredge tender boats. They are very well known for their manufacture of split-hull dump scows with sizes ranging from 300 to 6,000 cubic yards (see WJ, May 11).

Corn Island has a 1,000-foot fabrication building where steel comes in one end, moves to the plasma table, then to a single side welding table and finally to an automatic stiffener welder in a linear process. Modules are then constructed in the assembly area and moved outside. Three Manitowoc cranes, one with a 350-ton capacity and two with 300-ton capacities, and two Washington gantry cranes are used to install the fabricated modules. Vessels constructed are then moved to the tippers on hydraulic carts acquired from St. Louis Ship.

“Safety, quality and efficiency are our primary goals,” Foertsch said. “We also have in-house engineering and naval architecture capabilities as well as a long-standing, hard-working crew.”