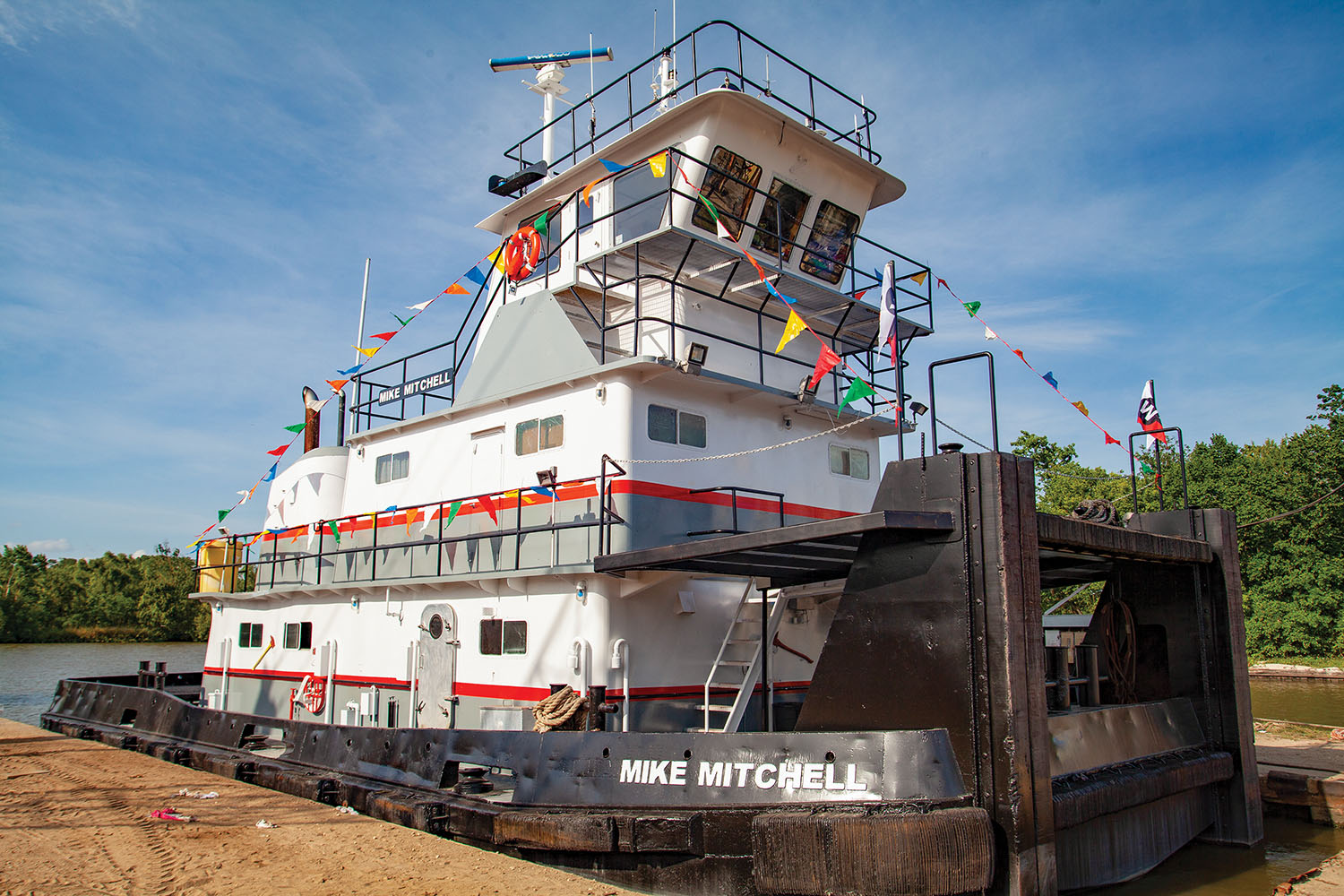 When Mike Mitchell, captain aboard Wood Towing’s mv. Harold Ancar, heard the company was planning to add a new towing vessel to its fleet, he immediately requested to be part of the crew to bring it down to the New Orleans area.

“I said I’d like to go get the boat, just because I’d never been,” Mitchell said.

Before the trip to retrieve the mv. Ashley Marie from Imperial River Transport of Belle Vernon, Pa., though, Mitchell learned of another, more personal reason for making the trip: the company was planning to rename it the mv. Mike Mitchell.

“They tricked me into coming into the office for a yearly eval,” Mitchell said, recalling a March 6 call from company leaders. “They asked me would I mind coming in at 2 o’clock, before I went into work that evening.”

When Mitchell stopped by Wood Resources’ headquarters along the river road in Avondale, La., on the west bank of the Mississippi River that day, he first saw Wood Resources CEO Sarah Louise Wood Ham. Then, Wood Towing General Manager Patrick McNeill met him at the door.

“He said, ’Come on in, I’ve got to get something out of the kitchen,’” Mitchell recalled. “I said, ‘Alright,’ and we’re walking and talking. We pulled into the kitchen, and someone hands him a shirt. He turns around and hands me a shirt, the shirt I have on, as a matter of fact. I’m like, ‘You can keep it. I’ve got one just like it.’”

It was one of Wood Towing’s vessel branded shirts.

McNeill and Ham said naming the new vessel—Wood Towing’s 10th—after Mitchell was an easy choice. Besides serving with excellence since joining the company in 2012, Mitchell is known as an outstanding trainer for the company’s younger crew members.

“He’s always our most enthusiastic teacher, so everyone who can wants to work for and learn from him,” McNeill said.

Mitchell said that dedication to mentoring is a reflection of the elder mariners who trained him, specifically Capts. Ellis Pitre and Thomas Inman, the latter better known as “Tin Man.”

Mitchell, a native of Ironton, La., started out as a deckhand at International Marine Terminal (IMT) on the Mississippi River near Myrtle Grove, La. He got his captain’s license in 1998 and began serving as a lead captain in 2000. Mitchell and his brother, Joaquim, attended a local maritime academy together. Joaquim, also a captain with Wood Towing, serves aboard the mv. Ben Nolan.

“When we came down with it, she purred like a kitten,” Mitchell said. “Quiet, quiet, quiet all the way down.”

The former Ashley Marie, built in 1980 by Orange Shipbuilding, measures 75 feet by 28 feet and offers 1,800 hp. from a pair of Caterpillar 3512 diesel main engines. McNeill said, while the mv. Mike Mitchell was at Hardrock, Wood Towing upgraded the vessel’s electronics, overhauled its main engines and generators, repiped the fuel and water systems and installed new pumps, along with exterior upgrades. The mv. Mike Mitchell, which already carried a Coast Guard certificate of inspection, will work for American Commercial Barge Line, primarily on the Gulf Intracoastal Waterway in a line-haul capacity. Mitchell, though, said he’d love to see how the boat performed in the fleet.

“That’s old-school steel right there,” he said. “Thick steel, so that boat’s got some weight.”

Wood Resources held a small, socially distanced christening ceremony to officially rename the mv. Mike Mitchell on May 12 at the shipyard. Mitchell and his wife, Natasha, climbed aboard the vessel, with Natasha breaking a bottle of champagne over its starboard gunwale, just above the nameplate. Throughout the event, in keeping with COVID-19 measures, those in attendance wore masks and maintained distance from one another, in deference to the mv. Mike Mitchell’s crew.

Ham and McNeill both said the company has taken steps at the office, at fleets and aboard vessels to minimize the potential spread of the virus, while continuing to fulfill the company’s essential service to the country.

“We weren’t surprised to see their work deemed essential, because when you work in the maritime industry, you’re moving products that feed and fuel the world,” Ham said.

Standing at the shipyard, looking at his name painted on the sides of the vessel, Mitchell said the reality of the honor was finally setting in.

Caption for top photo: The mv. Mike Mitchell moored at Hardrock Marine Services in Lafitte, La., May 12. The Mike Mitchell is the newest vessel in Wood Towing’s fleet. (Photo by Frank McCormack)