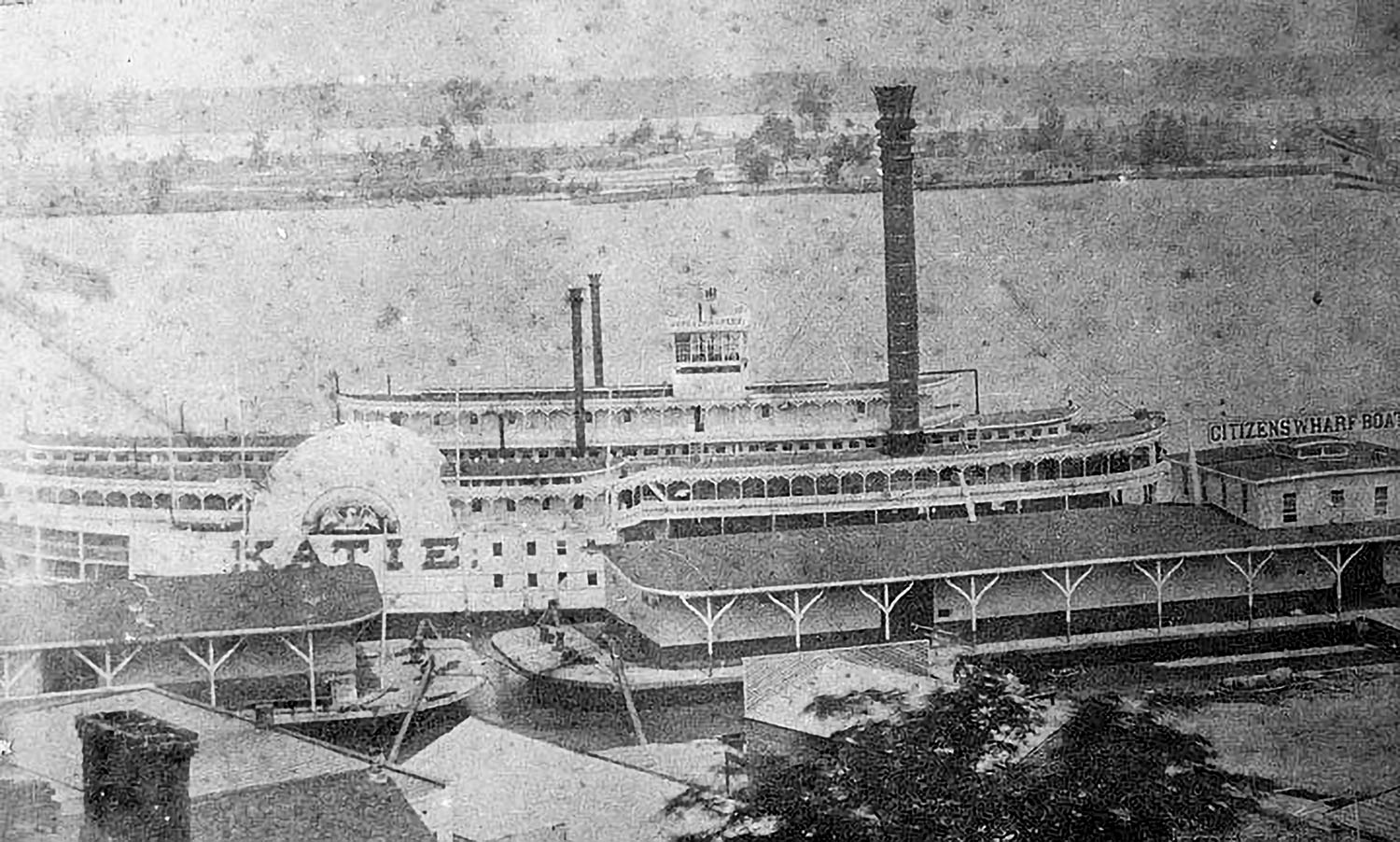 Among the beautiful big sidewheelers built on the Ohio River at Jeffersonville, Ind., was the palatial packet Katie.

Built in 1871, the steamboat was not constructed by the Howard Shipyard, but by the firm of David Barmore, who served a five-year apprenticeship under James Howard when he briefly operated the shipyard at Madison, Ind., in the 1840s. Barmore eventually purchased the yard in 1891. It is estimated that under his 15-year ownership some 800 hulls were constructed for such notable packets as the New Mary Houston, Belle Lee, Grand Era, J.C. Swan and the Anchor Line steamer Hill City.

Barmore, whose sister Rebecca married James Howard, sold the Madison yards back to Edmonds Howard in 1901.

The Katie, named for the wife of owner Pinkney Smith, was built on a wooden hull measuring 284 feet in length by 43 feet in width. Nine boilers supplied the steam for engines having 38-inch cylinders with a 10-foot stroke. The sidewheels were 39 feet in diameter, containing 17 buckets. The engines were originally made for the Robt. E. Lee, but Capt. John W. Cannon changed his mind and ordered larger engines for the Lee, the discarded engines going to the Katie.

Capt. J.M. White, who served as master of the Katie, wanted to name the boat Lady Lee to honor the widow of General Robert E. Lee, but was outvoted. The handsome packet, which carried the state seal of Louisiana on its paddleboxes, was built for the New Orleans–Lake Providence trade and had a reputation of being quite fast and difficult to steer.

On its maiden trip, the riverboat struck the wreck of the packet Lucy Holcomb on November 8, 1871, and sank at Trotter’s Point, opposite Helena, Ark. Raised and returned to service, the boat sometimes ran between New Orleans and St. Louis during the summer months. During foggy conditions on January 23, 1876, with 3,000 bales of cotton aboard, the Katie drifted into a crevasse at Bonnet Carre, La.—now the site of the spillway—lodging some 2,200 feet from the Mississippi River and remaining there for some time.

The vessel was taken to Jeffersonville in May 1878, reportedly having quite a struggle while ascending the Indiana chute of the falls with the assistance of the towboat Resolute. Dismantled at the Howard Shipyard, much of the Katie’s machinery went into the construction of the Ed Richardson. The hull became a wharfboat on the Ouachita River at Monroe, La., until destroyed by a fire in 1880 that also consumed the packet Fairplay.

An excellent 1/8-scale model of the Katie was completed in 1972 by the late Howard Gregory Goldstein, steamboat buff of Louisville, Ky. Goldstein (1945–2013) was a loyal volunteer at the Howard Steamboat Museum in its early days and assisted with the emergency salvaging of the 1,500 glass plate negatives from the camera of Capt. James E. Howard after the disastrous museum fire of March 1971, as well as restoring a fire-damaged model of the steam towboat G.W. Thomas. Goldstein’s model, which he bequeathed to the Howard Steamboat Museum, made its debut at the 1972 meeting of the Sons & Daughters of Pioneer Rivermen at Marietta, Ohio.

Caption for photo: The Katie at a Vicksburg wharfboat. (Keith Norrington collection)