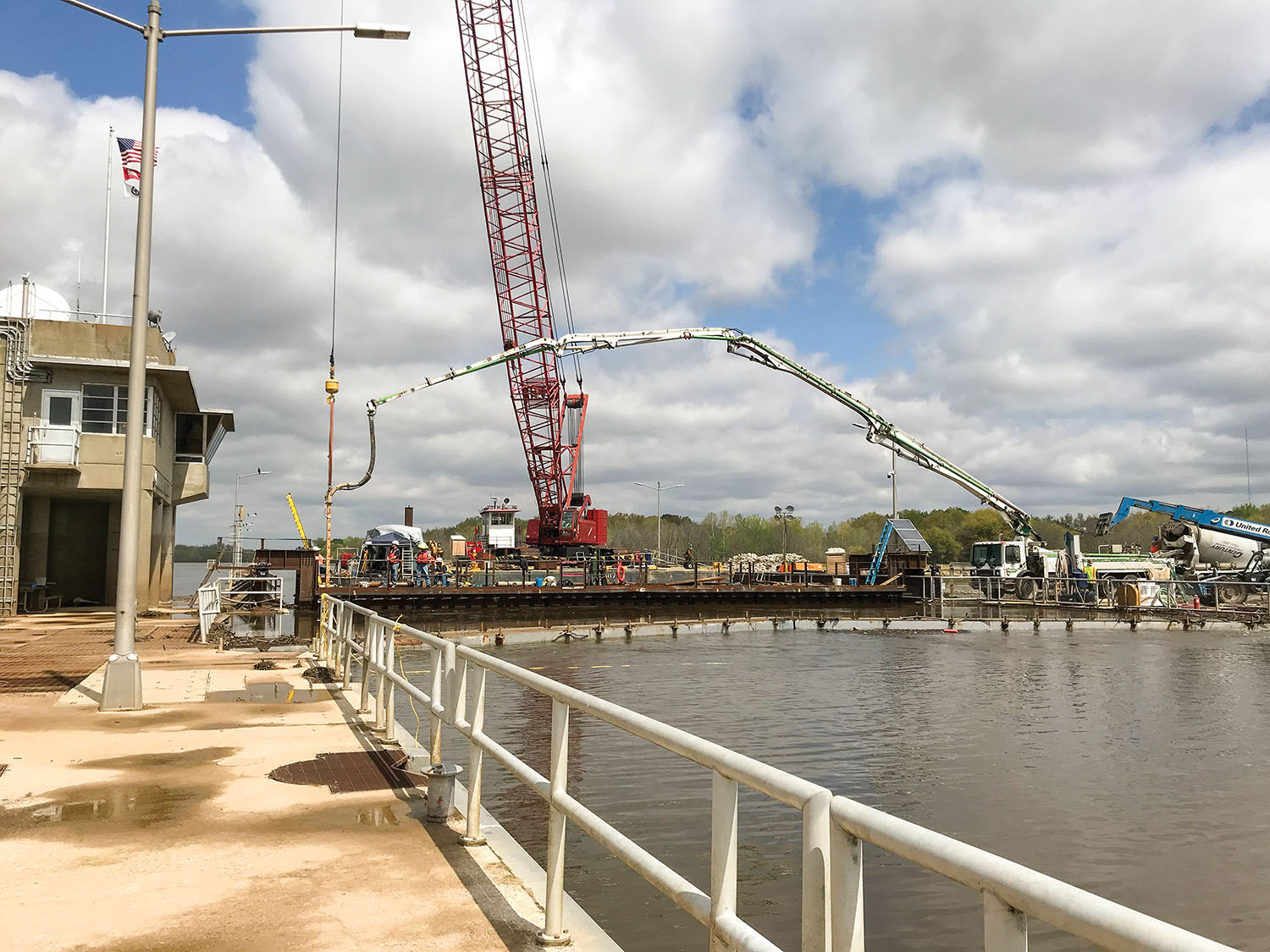 In July 2018, the Vicksburg Engineer District announced an emergency closure at Columbia Lock on the Ouachita River in the northeast corner of Louisiana. District personnel investigating seepage and sand boils at the structure had discovered voids under a lock wall.

Two and a half years prior, a sand boil had developed inside the lock chamber, with water upstream of the lock forcing its way under the miter gate, through the aquifer beneath the lock and up through  the lock floor. Unlike many locks that have a heavy, continuous concrete floor, the lock floor at Columbia is made up of a sand and gravel base layer that acts as a filter, with heavy concrete blocks on top to hold that filter in place. The porous floor was intended to allow seepage between the upper pool and lock chamber.

Columbia Lock provides a maximum 18-foot lift between the lower pool to the upper pool.

“In late 2015, there was the sand boil inside the lock chamber floor, so we knew those blocks and the filter system had become compromised and had displaced some of those blocks,” said Lanny Barfield, dam safety officer for the Vicksburg District. “We now had water running under the lock and boiling up into the lock chamber.”

When Corps officials discovered that initial sand boil in November 2015, they addressed the issue by raising the water level in the chamber to that of the upper pool, much like how the Corps will sandbag around a sand boil on the land side of a levee.

“We raised the pressure and stopped it and then did an emergency repair with our in-house crew,” Barfield said. “We were just trying to get the lock back open as fast as we could.”

That worked until June 2018, when a sand boil formed below the downstream miter gate.

Columbia’s lock walls have preformed holes filled with sand, likely intended to be a relief well. Barfield’s geotechnical branch team drilled through those in search of voids.

“When we broke through the bottom, our drilling fluid was going into voids, and it was showing up downstream of the lock,” Barfield said. “That was very concerning because it told us that we had a continuous void. We were drilling on the upstream of the lock, which is 600 feet long and 84 feet wide, and within minutes our drill fluid was showing up coming out of a sand boil downstream.”

“I ended up declaring a dam safety emergency,” Barfield said. “It was an emergency because we could no longer control the erosion under the structure by manipulating the pool, and we didn’t know how fast it was eroding.”

With modeling and project design by the Corps’ Engineer Research and Development Center (ERDC) and the Inland Navigation Design Center, the Vicksburg District secured funding and advertised and awarded the contract to Massman Construction Company. on August 16, 2018, less than a month and a half after declaring the dam safety emergency.“We were fortunate to get a good contract awarded with Massman Construction,” said Tim Shows, chief of construction, Vicksburg District.Shows also praised the team Massman Construction assembled for the project. Major subcontractors for the project included Hayward Baker Inc., Griffin Dewatering, Specialty Diving, Fugro and Copeland Electric.The plan was to use sheet piling to cut off the erosion channel, fill in voids with pressure grouting and drill relief wells to hopefully prevent future issues. But an unknown remained: the extent of the voids.

“The challenge of the project was that there was a high degree of uncertainty,” said Michael Massman, project manager for the Columbia repair project. “As it turned out, the voids were much larger than originally approximated.”

“In one area in particular, the grouting we did there was 10 times the volume we initially anticipated,” Shows said. “We found holes in some areas as much as 12 feet beneath the structure.”

Much of the project also coincided with the historic 2019 high water season, which at times suspended work at the lock and at others required Massman Construction to revise its means and methods, including restaging its platform across the lock chamber.

“We were able to adapt and adjust as best we could,” Massman said. “For much of that time, we had water over the lock walls. Once the water receded further, the last two months returned to the seven-day-a-week schedule the project started out at.”

“At one point, we had over 4 feet of water over the lock walls,” Shows said.

In all, Massman Construction drilled about 300 holes in search of voids, in connection to grouting or concrete, or for relief wells. Most of those were underwater, with the lock in the wet.

Where voids were too large for grouting to be economical, Massman Construction developed a plan to pour concrete, then complete the repair with grout. The company also had to remove about 32 of the 8-foot by 8-foot blocks from the lock floor to make repairs. Crews removed the blocks, cleaned out the filter material and filled it with concrete. The new floor included weep holes to mimic the original filtration system.

In all, Massman Construction placed 20,500 cubic feet of grout and nearly 700 cubic yards of concrete. Despite the expanded scope of the project and the challenge of high water, the company was able to finish the project by mid-summer 2019. The lock reopened to navigation on August 1, 2019.

The final cost of the project cost was $23 million. Barfield said he hopes the added relief wells around the lock chamber will allow the Corps to manage the aging lock and keep it in service for years to come. The challenges at Columbia, he said, are endemic of what’s happening throughout the system.

“We have structures that have basically exceeded or are approaching the end of their lifespan,” he said. “Only the future knows how everything will hold up and how long they last.”

The project earned Massman Construction a 2020 Construction Risk Partners Build America Award in the Federal & Heavy Renovation category. Henry Massman, president of the company, Paul Scharmer, vice president, and Massman received the award in March at the annual convention of the Associated General Contractors of America.

“The award was a bit of a surprise, but it was a great recognition of the project and a testament towards the entire team’s efforts,” Massman said.

It’s the seventh Build America Award Massman Construction has received. Its most recent award came in 2012 for the Huey P. Long Bridge Superstructure widening project. That project won the Build America Grand Award, as well as the Highway and Transportation-Renovation Award that year.

Massman Construction was founded in 1908 in the Kansas City, Mo., area. A fifth-generation family business, Massman Construction specializes in bridge work, dock expansion and lock and dam projects, with a historic focus on the Gulf Coast and inland waterways.

Caption for top photo: Larger-than-expected voids meant Massman had to bring in an additional floating crane and use tremie concrete and pressure grouting. (Photo courtesy of Massman Construction)