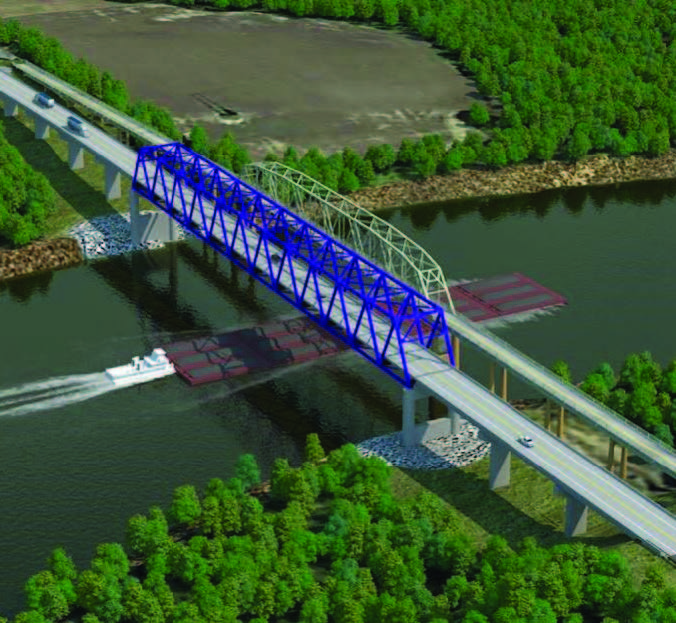 The Kentucky Transportation Cabinet has approved a construction bid for a new bridge carrying U.S. 60 across the Cumberland River at Smithland.

Jim Smith Contracting of Grand Rivers, Ky., submitted the bid of $63,627,756 for the bridge, which is to be built immediately downstream of the existing bridge at Cumberland River Mile 2.7.

“Modern transportation infrastructure is vital to the continued growth and progress of west Kentucky,” Gov. Andy Beshear said in a statement. “This new bridge over the Cumberland River will be an asset not just to the people of Livingston County but to the entire region for many years to come.”

The new bridge will have a continuous truss design, similar to the U.S. 60 bridge over the Tennessee River at Ledbetter, also in Livingston County. It will include a 40-foot-wide, two-lane deck with 12-foot driving lanes and 6-foot shoulders to provide ample clearance for most farm equipment to stop without stopping oncoming traffic, Kentucky Transportation Cabinet District 1 Chief Engineer Kyle Poat said.

The Seamen’s Church Institute helped in testing designs for the bridge, including pier placement and alignment. Pilots practiced navigating under various configurations of a simulated bridge and gave their feedback on each one. The feedback was valuable and helped transportation officials determine the need for a design where at normal water levels the piers supporting the bridge are out of the water, said Keith Todd, spokesman for the Kentucky Transportation Cabinet’s district 1 office in Paducah.

SCI has also recently consulted on other bridge designs, including the plans for a new bridge carrying U.S. 51/60/62 bridge between Wickliffe, Ky., and Cairo, Ill., across the Ohio River.

“At a time when we at the Kentucky Transportation Cabinet are concerned about the health and well-being of all of our fellow Kentuckians, we also are keenly aware that we must continue to build and maintain a modern, efficient highway system,” Gray said. “This bridge replacement project is important to the people of Livingston County and surrounding areas, and KYTC is committed to its delivery.”

The new Cumberland River bridge will be 80 percent federally funded with the state providing a 20-percent match. Initial work at the site will include maintenance on the existing 89-year-old bridge.

“The general maintenance work on the existing bridge is to ensure we can maintain a high level of service through the three years of construction it will take to complete the new bridge,” Poat said.

The district’s engineering staff plan to meet with engineers from Jim Smith Contracting within the next few weeks to establish a schedule for both the maintenance work and the beginning of construction on the new bridge. The first visible work on the new bridge will be basic site preparation for equipment assembly and a construction supply marshaling area to allow excavation for pier footers, Todd said.

Poat said the truss may be constructed off-site and floated to the new bridge by barge, the same way steel arch structures were added to the Eggners Ferry Bridge over Kentucky Lake and the Lake Barkley Bridge at Canton, both carrying U.S. 68 through western Kentucky.

The existing U.S. 60 Cumberland River bridge at Smithland, also known as the Lucy Jefferson Memorial Bridge and the Smithland Bridge, is 1,817 feet long.