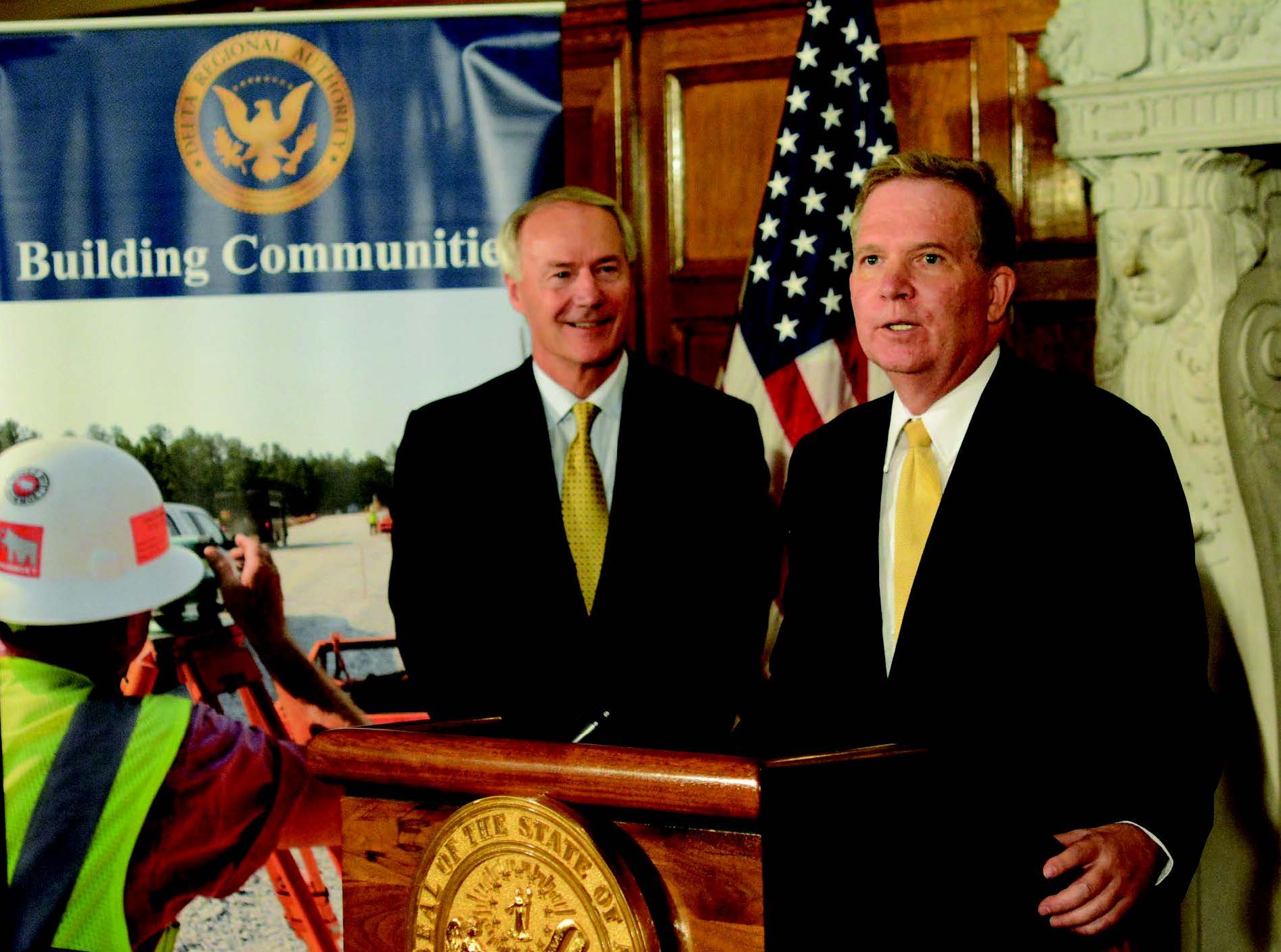 It has taken years of effort, many near-stalls and the building up of every element of an inland port almost from scratch, but Helena Harbor is on the move and accelerating.

Helena Harbor was officially formed in the 1970s. It enjoyed a prime location on the Mississippi River at Mile 652, just 65 miles south of America’s acknowledged distribution center, Memphis, Tenn. As its website says, “[i]ts strategic location provides ready access to the nation’s heartland via nearly 15,000 miles of inland water transportation as well as to the Gulf of Mexico and ocean trade lanes to and from Latin America and the rest of the world.”

But the property needed a lot of development. The local population base was small, making recruitment of large tenants a challenge. More than that, it needed a plan. By 2003, it seemed stuck in neutral. Jim Frazier was the longest-serving board member, having been around since the 1970s. He called one of his oldest friends, John Edwards, who had served as an aide to Arkansas Sen. David Pryor and worked closely with the late Senator Dale Bumpers on economic development issues when Edwards served as State Director of USDA Rural Development for Arkansas. Frazier sounded him out on his plans. Would he be interested in managing the port?

He would. But a funny thing happened on the way to Edwards’ directorship of the port. Or rather, a whole series of “funny things.” Edwards’ National Guard unit was called up, and he spent 18 months on active duty, including a year in Iraq starting in April 2004. On his return, Frazier again approached him. But in 2005, Hurricane Katrina struck, and Edwards’ National Guard unit was again called upon to assist.

This time it ended up evacuating 16,000 people from New Orleans’ Convention Center.

Then Edwards ran for and won a seat in the Arkansas state legislature, serving three terms. He was finally able to assume day to day responsibility for the port in October 2014.

Edwards was immediately faced with a crisis. The local railroad the port had been negotiating with to extend its rail line, Arkansas Midland Railroad, had been sold to the Gennessee-Wyoming Railroad. Through a chance meeting, Edwards learned that the new management of the railroad knew nothing about the conversations the port had been having to create new rail business. They had issued an embargo and were considering taking up the rail. He immediately drove to the office of the new owners at Malvern, Ark., to see what could be done. He remembers meeting a Gennesee-Wyoming representative who was “the biggest man I ever saw. He looked at least 6-foot-7-inches tall!”

But thankfully for the port, a rail service agreement was worked out, and the rail line was saved for future expansion. The railroad and port each put in half the cost of a $1 million rail expansion and rehab. The Helena branch line was out of service for six months in 2015, from March through October. But since then, rail use has trended upward without a break and local switching to the Class 1 Union Pacific takes place four days a week now.

With those fires put out, Edwards’ first order of business was to develop a master plan for the port’s 4,000-acre property. “I was grateful the Walton Family Foundation got interested in the port,” he told The Waterways Journal. With the foundation’s help, the port hired the Jacobs Engineering Group to help develop the master plan.

In 2015, the port acquired its most important tenant, Enviro Tech Chemical Services Inc., a world-leading maker of sanitizing chemicals, including peracetic acid. Enviro Tech opened at the renamed Helena Harbor in 2015, completed its first major expansion in 2018 and is now planning to embark on a new expansion in 2021. Also in 2015, the port put natural gas service in place. In 2016, it became an AT&T fiber-ready site.

The COVID-19 crisis highlighted a nationwide demand for hand sanitizer, with panicky stories about shortages in the media. For Enviro Tech, and therefore for Helena Harbor, the emergency was an opportunity. “Enviro Tech switched a bunch of its production to hand sanitizer within four days,” Edwards told The Waterways Journal. “This demand was a major drive behind its planned expansion.”

Helena Harbor now has a number of irons in the fire. ‘We’re within striking range of completing all the elements of our critical infrastructure,” Edwards said. Thanks to a grant from the Arkansas Waterways Commission, the port recently completed a waterline extension of its 16-inch and 8-inch water lines. “We’ve been working on that for the past four or five years,” Edwards said. “We’re gratified to have been able to complete that.”

On May 18 of this year, it submitted an application for a Marine Highway designation to the Maritime Administration, along with an application for an $8.25 million grant to support its expansion plans. Its plans include building up a laydown area, expanding its rail loop, building more warehousing and finishing a 500,000-gallon water tower. “The water tower isn’t just for drinking water,” Edwards said.

“Enviro Tech is extremely conscious of safety and sanitation, and the tower will provide the necessary pressure to help with fire suppression needs.” Total spending will be $11 million; the port will supplement the anticipated grant with other grant sources.

The port is in negotiations with American Patriot Holdings on becoming a container-on-barge hub. With a dedicated COB operator signed up, the way would be opened for further grant opportunities.

“Wrapping up all these pieces together with these partners will help us achieve the original vision for Helena Harbor,” Edwards said. “The masterpiece is being sketched out; not all the colors are filled in, but we can see what it will look like.” Edwards only wishes his friend and long-time mentor, Dale Bumpers, was here to see it. Bumpers passed away in 2016 at age 90. “He was a true public servant” and a dedicated supporter of port infrastructure, Edwards said.

He is optimistic that as the COVID crisis continues, more businesses will consider relocating in less densely populated areas like Helena, especially if they have outstanding logistics infrastructure. “We’re also one of the most-water-rich environments in the U.S.,” Edwards notes, with an average annual rainfall of about 44 inches. That’s important for many manufacturing processes.

It’s been a long and winding road, but Helena Harbor is on the move with what seems like unstoppable momentum.