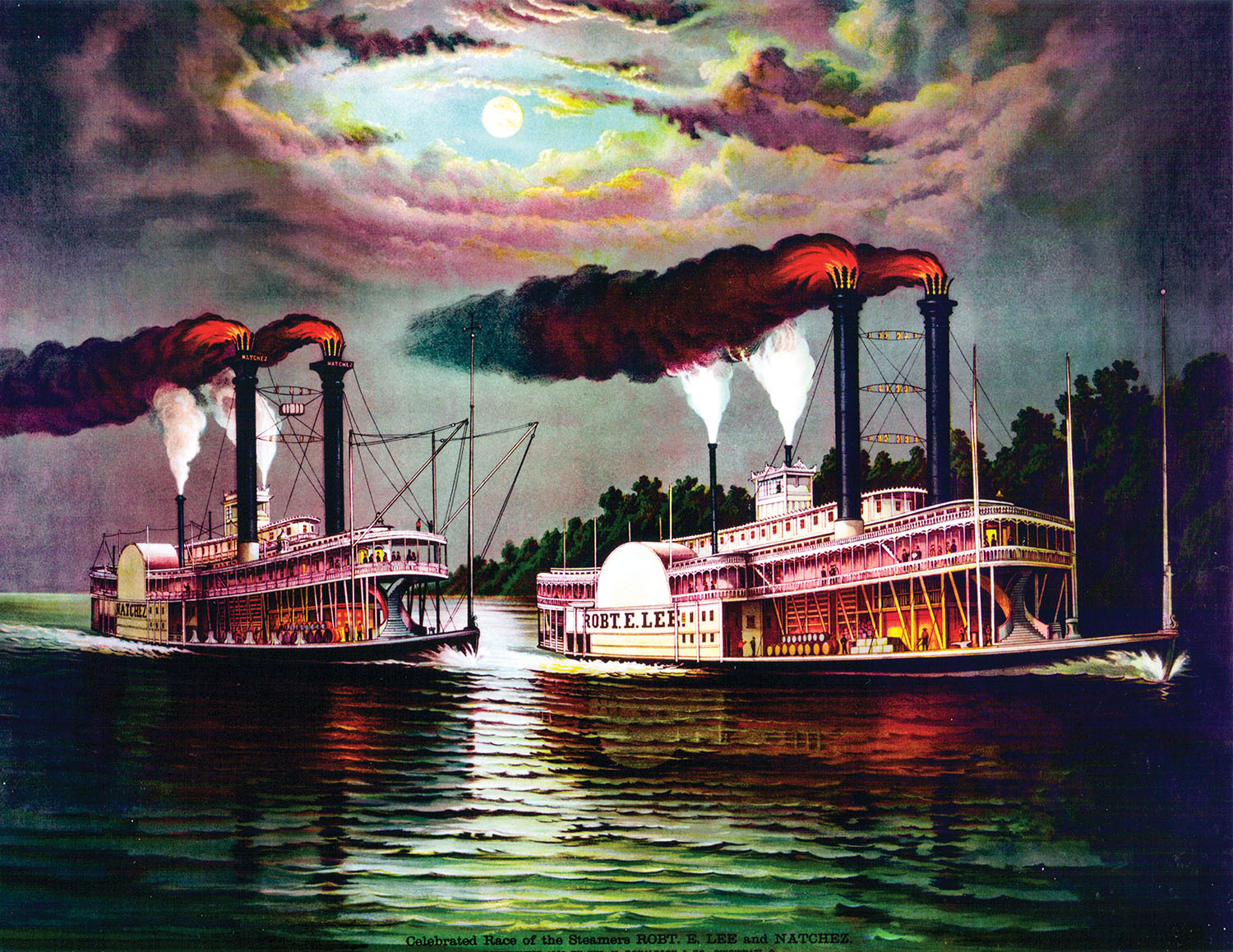 There was grand excitement along the St. Louis levee 150 years ago when the steamer Rob’t. E. Lee triumphantly arrived on July 4, 1870, hours ahead of the Natchez after a controversial race that began in New Orleans on June 30. The Lee’s time was three days, 18 hours and 14 minutes.

Both boats experienced delays; the Lee had mechanical problems with a doctor pump and a minor leak in one of its eight boilers. The sidewheelers encountered fog in the vicinity of Cairo, Ill.; the Lee proceeded cautiously on a slow bell, but the Natchez went to the bank, losing four hours and 45 minutes.

Imagine the colorful scene, in a time when communication was greatly limited. A local newspaper, the St. Louis Democrat, described the festive atmosphere in detail. “Everywhere in St. Louis, the one theme upon all tongues was the great race of the Natchez and the Lee, and the deepest interest was constantly expressed for still-fresh dispatches of their relative progress. The bulletin boards were surrounded by eager crowds, scanning the latest posted telegrams and discussing the degree of success and the prospects of each boat. As usual, the head competitor found the most sympathizers, the largest number of enthusiastic believers in its final success. The telegraph offices were kept busy sending off or receiving dispatches, both for individuals and the press, to or from the various points along the river.”

Interest in the steamboat race was not confined solely to the city of St. Louis. The paper further reported: “Cannons were fired at many points, innumerable rockets sent up, and every day the banks of the great river showed groups of men, women and children shouting and waving handkerchiefs. At Natchez, Miss., the famous horns won by the steamer Princess, whose time had not been beaten for 14 years, were taken down from the wharfboat and placed aboard the Rob’t. E. Lee. The citizens of Cairo fired cannons as the Lee passed and the entire population turned out. Some 1,000 persons, from such river cities as Louisville, Evansville, Paducah and elsewhere were aboard the steamers Odd Fellow, Idlewild, Armada, Rubicon and other vessels that went down the river to see the wonderful racers. At Memphis, the bluff was reported packed with people, and the betting was enormous. To make the anxiety over the race even more so, the telegraph lines from Helena to Memphis failed and were not repaired for over three hours. The Memphis correspondent for The Missouri Democrat reported that the boats had not come into sight, and that huge bonfires were ready to be lighted to welcome the racers.”

The Rob’t. E. Lee was built at New Albany, Ind., in 1866. Constructed by the firm of DeWitt Hill on a wooden hull measuring 285 feet in length by 46 feet in width, the riverboat was owned by Capt. John W. Cannon. The boat’s name was chosen owing to the fact that it was to operate in the cotton trade between Vicksburg and New Orleans.

The Natchez was the sixth steamboat of the name to be commanded by Capt. Thomas P. Leathers; it was an 1869 product of the Cincinnati Marine Ways and was built on a wooden hull 301 feet in length by 42 feet in width.

The Lee was dismantled in 1876 at Jeffersonville, Ind., where the Howard Shipyard constructed a second and more opulent Robt. E. Lee. The old Lee was towed to Vicksburg to become a wharfboat at the Refuge Oil Mill. The Natchez operated until 1879, when it was replaced by a new steamboat of the same name.

The silver victory bowl awarded to Capt. Cannon is in the collection of the Missouri Historical Society at St. Louis. Three chandeliers from the Lee adorn the sanctuary of the First Presbyterian Church at Port Gibson, Miss. The Howard Steamboat Museum displays a cabin arch, stateroom door and silverware from the Lee, as well as a medicine chest used aboard the Natchez.

Steamboat memorabilia collectors Dave Rankin and Donna Allen discovered, and generously share with WJ readers, an excellent and first-known image of the Lee’s cabin, confirming that the ornamental arches and chandeliers are, indeed, from the famous steamboat. After the Lee was dismantled, the Howard family reportedly utilized the arches for grape arbors; over a century later, a number of them were found in the hay loft of the carriage house.