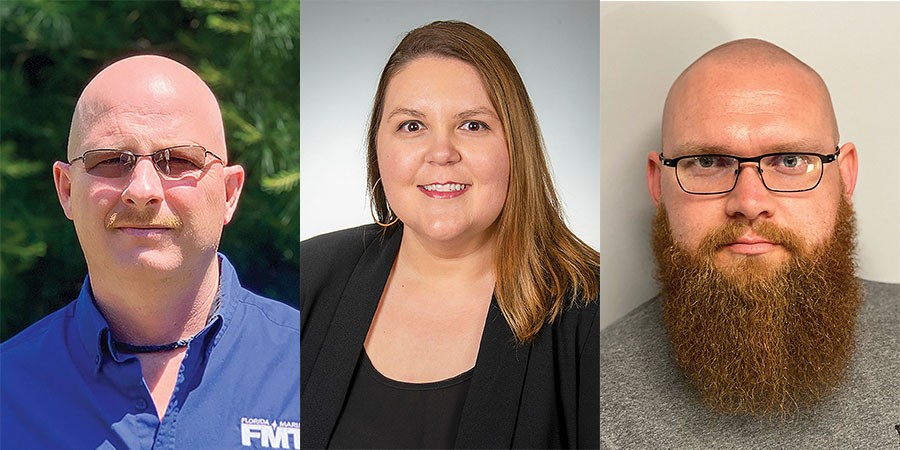 Over the course of 14 weeks, The Waterways Journal is featuring all 40 recipients. This week we recognize James Jaco, Crystal Jones and Josh Jordan.

James “Tommy” Jaco, 39, is a tankerman involved in maintenance and repair for Florida Marine Transporters.

Jaco started his career with Jaco’s Tankerman Service in May 2000, trained by his uncles, Neal Jaco and Jesse Jaco. He received his tankerman license in November 2000 and worked for the service for 13 years, loading and discharging barges along the Tennessee, Cumberland, Ohio and Lower Mississippi rivers. He then moved to the Louisville, Ky., area in January 2007 to be a tankerman supervisor in that area.

“Tommy Jaco was trained by the ‘old guys,’ the ones who worked hard, never stopped and always got the job done,” said Shannon Jaco, owner and CEO of Barge Transfer Services in Ledbetter, Ky. “He entered the industry at a time when safety and the environment were the most important issue of the day. He combines that industrious, self-driven attitude with a safety and environmental consciousness that represents the evolution of the industry into what it has become today.”

She added that he was influential in establishing safety policies and procedures for Jaco’s Tankerman Service and helped train many new tankermen, both about how to load and discharge barges as well as the importance in maintaining personal safety and environmental stewardship while on the job.

Jaco began working for Florida Marine Transporters in June 2014 as a shore tankerman in the St. Louis area. FMT said his eagerness to work and dedication to the job soon had him traveling to surrounding areas.

“Within a few years Tommy had become an irreplaceable asset to the company,” FMT said in a written statement. “He often provides support to our maintenance and compliance departments. In the six years Tommy has been with FMT, he has shown nothing short of excellence. He is always willing to help with whatever it takes to get the job done safely. Florida Marine is grateful to have such a stand-up employee on our side.”

Crystal Jones, 40, is senior underwriter for The American Equity Underwriters Inc., of Mobile, Ala.

Jones began her career in the maritime industry when she joined AEU in January 2011 as an underwriting assistant. AEU is the nation’s leading provider of workers’ compensation for the marine industry.

“As an underwriting assistant, Crystal used her prior five years of customer service experience to help her build productive relationships, resolve issues and win the loyalty of customers, called “members” at AEU,” said Julie Bland, AEU’s senior vice president and director of marketing. “Her strong ability to work with teams and guide complex problems to resolution led to her promotion to underwriter in 2013, and to senior underwriter in 2019.”

A licensed insurance producer, Jones also holds Certified Insurance Service Representative (CISR) and Commercial Lines Coverage Specialist (CLCS) designations. Additionally, she has a bachelor’s degree in communications and a minor in sociology from the University of South Alabama.

“Her profound understanding of the maritime industry not only enables her to underwrite profitable business, but also to build solid relationships and credibility with carrier partners, members, insurance brokers and co-workers,” Bland said.

“She is an important member of our leadership team and a great resource for both our employees and the waterfront employers who rely on her for guidance on their workers’ compensation needs,” Bland said.

Nicknamed 3G for being the third generation of his family to work for National Maintenance & Repair, Jordan followed the career path of his father and grandfather into the company. He has been with National Maintenance & Repair for 14 years, starting his career as an engine block machinist. He now has become a manager over his group, among taking on other duties, such as purchasing, billing, quoting and other tasks.

Jordan lives in Jerseyville, Ill., and is married with two children. When not working, he enjoys working on motorcycles and small engines.

“Josh is always willing to take on more responsibilities when needed,” Poston said. “National Maintenance & Repair Inc. has a proven leader for many years to come.”