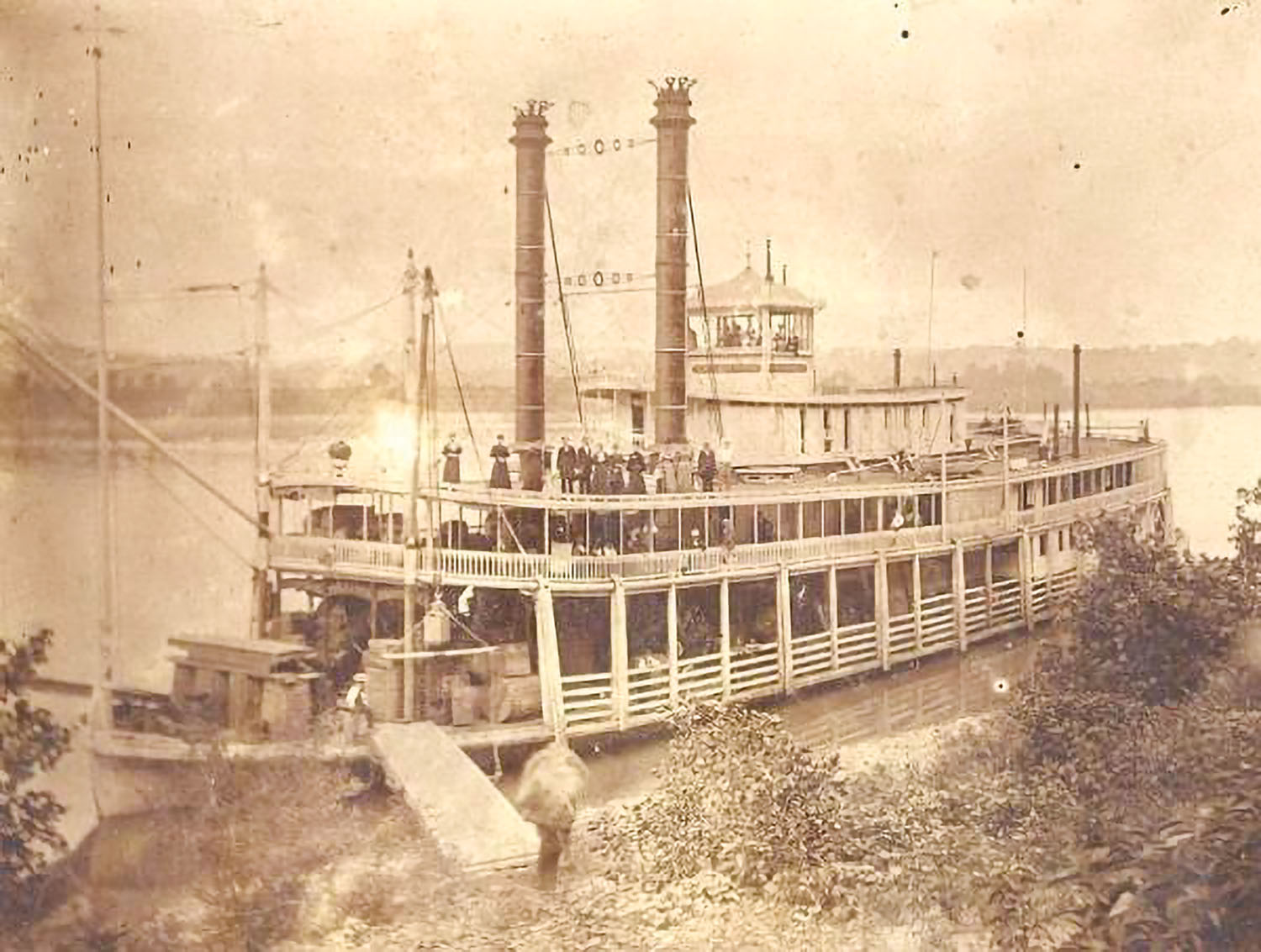 A Recent Revelation Of The Str. Tell City

A lucky and recent acquisition is this week’s main image of a pretty packet boat that was popular in the annals of Ohio River steamboating.

The Tell City was constructed in 1889 by the Howard Shipyard at Jeffersonville, Ind., for a contract price of $21,350. Named for the Ohio River town of Tell City, Ind., the wood-hulled vessel was 191 feet in length by 35 feet in width, with a depth of 5.2 feet. Three return-flue boilers provided steam for engines having 17-inch cylinders with a 7-foot stroke.

The sternwheeler was built for the Louisville & Evansville Mail Line Company and originally had double swinging stages. Two round trips were made each week between the two cities, with connections being made at Louisville with the steamboats of the Louisville & Cincinnati Packet Company to Cincinnati.

This writer had paternal ancestors residing in Kentucky, who rode the Tell City (and later the Southland) to and from New Albany, Ind.

The ownership was reorganized in late 1902 to become the Louisville & Evansville Packet Company. The Tell City, under the command of Capt. Fred Zoll, often ran in conjunction with the steamer Tarascon.

The company failed in 1910 and was reorganized as the Louisville & Evansville Transportation Company with F.A. Laidley as president and T.A. Williams as superintendent. The boat was rebuilt and widened at Point Pleasant, W.Va., in 1911.

In September 1898, the Tell City sank in the Louisville & Portland Canal, but it was quickly pumped out by the towboat Transit. While repairs were underway, the double stages were removed and thereafter the vessel had a single swinging stage supported by a center A-frame mast.

In the spring of 1916, the riverboat was purchased by Capt. Fred Hornbrook and other investors for the Pittsburgh–Charleston trade, operating with the R. Dunbar for the Ohio & Kanawha River Transportation Company. The Tell City replaced the sternwheeler Kanawha, which had overturned below Ohio River Lock No. 19.

On April 6, 1917, the Tell City, with Capt. Charles Ellsworth in charge, was downbound after having landed at Little Hocking, Ohio. The pilot on watch, Capt. Mike Davis, backed the steamboat down through the open beartrap of Lock No. 19, rubbing the hull against it. The boat began to take on water quickly and was forced into shore on the Ohio side, striking the bank so forcefully that the smokestacks were knocked down, killing a male passenger who was standing on the roof. The hull settled rapidly with water up to the second deck. The river rose steadily for several days following the accident, and the wooden superstructure gradually disintegrated, with little remaining save the pilothouse. The Tell City was deemed a total loss.

The domed pilothouse was removed from the wreckage by the Bent family, who converted it into a gazebo of sorts overlooking the Ohio at Little Hocking.

Many decades later, the Ohio Historical Society obtained ownership of the deteriorating riverboat artifact and had it moved to the grounds of the Ohio River Museum at Marietta, Ohio, in 1976. After extensive restoration, with much financial assistance for the project provided by the Sons and Daughters of Pioneer Rivermen, the revered relic was opened to the public in 1977.

Caption for top photo: A recently discovered image of the Tell City at a bank landing. (Photo by Keith Norrington)