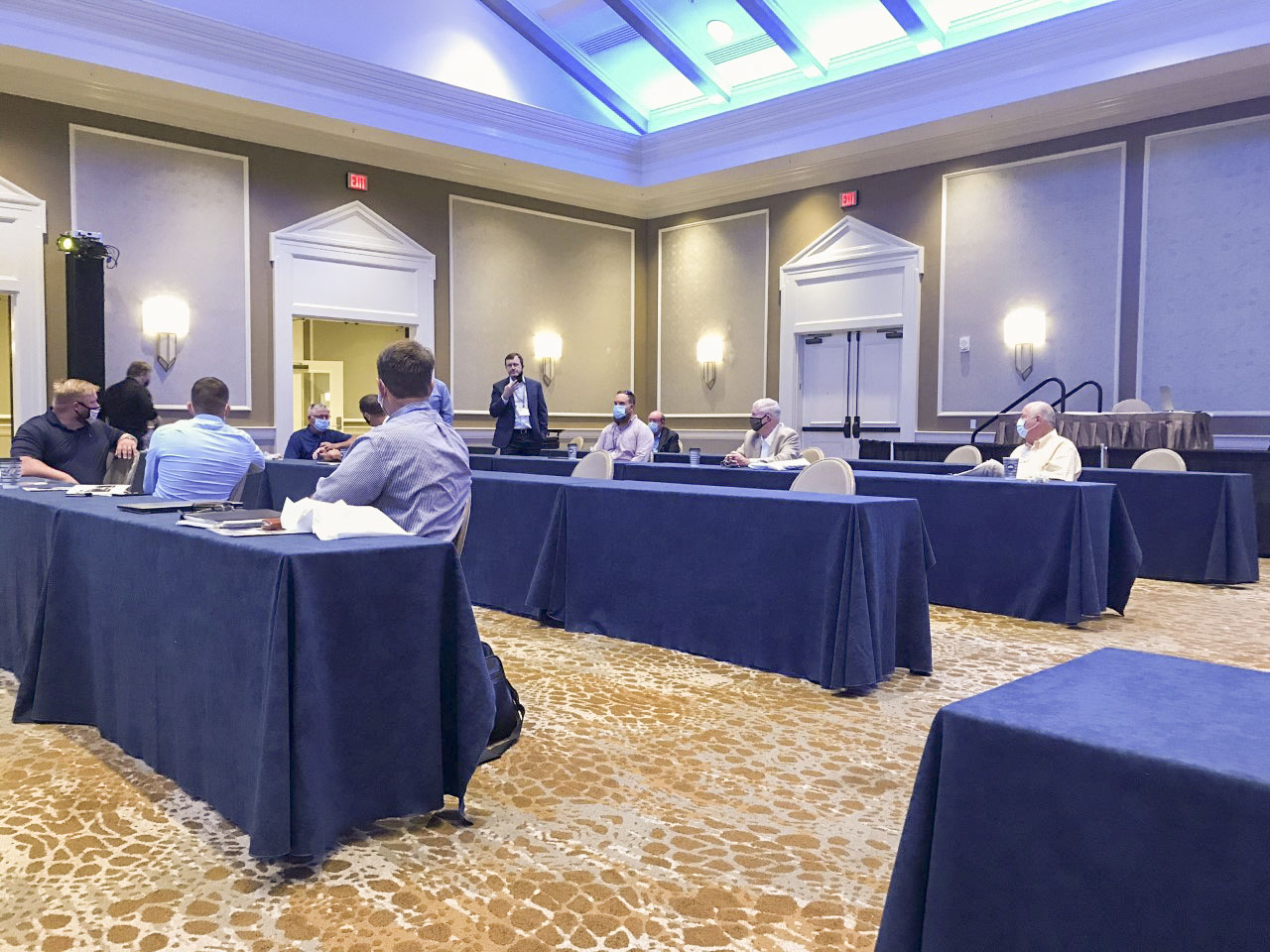 Despite a delay from its originally-scheduled date in May due to COVID-19, and with social distancing measures in place, the WTWA annual meeting marched on to become one of the first inland waterway-related conferences to be held since the start of the pandemic.

Larry Merrihew, president of the association, said he was pleased with how the conference came together and with the attendance.

“We actually had about 65 people who attended in person, which was a surprise, because we usually have about 125, plus spouses,” Merrihew said. “Whether virtually or on site, everything turned out well.”

For the first time in its history, the WTWA conference featured a virtual component, with those attendees and presenters who were not able to attend due to COVID-19 restrictions joining in through a video conferencing application called BlueJeans.

“It was definitely unique, but it worked very well,” Merrihew said. “It seemed like everyone who was watching or presenting virtually was able to follow along well.”

The annual meeting opened with a golf tournament at the Rock Creek Golf Club and an evening reception. Day two began with a users and operators meeting and presentations from the U.S. Army Corps of Engineers and the U.S. Coast Guard.

Wynne Fuller, chief of the Mobile Engineer District’s operations division, overviewed recent funding and tonnage statistics for both the BWT and the Tennessee-Tombigbee Waterway, which extends through Alabama and northeast Mississippi to the Tennessee River.

“How fortunate we are to be located in an area where we have terrific water access,” Fuller said. “The extent of our nation’s waterway system is phenomenal. No other country in the world enjoys quite the access we have. The Mobile District manages about 10 percent of the overall resources within the Corps of Engineers with respect to navigation and particularly the inland marine transportation system. Of over 200 locks and dams, we have 22 of those. Of the more than 13,000 miles of coastal and deep-draft channels, more than 2,000 miles of those are in the Mobile District.”

Perkins spoke on the 2020 winter and spring flooding on the BWT, which ranked among the top floods in the history of the waterway. At the lock in Coffeeville, Ala., the February 23 crest of 48.85 feet ranked sixth, while the February 18 crest of 85.24 feet at Demopolis Lock is fourth in the lock’s history. Perkins went on to overview spring dredging operations on the waterway, with a look toward an advanced maintenance dredging project in the vicinity of Sunflower, Ala., in the fall.

There were closures scheduled at Oliver and Bankhead locks this year which have been postponed to 2021, Perkins said. Perkins also overviewed a two-week closure at Heflin Lock this month and a nine-day closure planned for Holt Lock in August. That closure, set for August 18–27, will include dewatering the lock chamber, removing the defective Belzona coating on the lower miter gate contact blocks, inspecting miter gate components and testing the gates. Corps maintenance contractors will also install newly fabricated emptying and filling valves at Holt Lock.

Murphree then discussed summer maintenance work at both Helfin and Whitten locks on the Tennessee-Tombigbee Waterway.

“You all are among our most involved, civic-minded citizens, and I appreciate your friendships and partnerships as we work together to make our state the best she can be,” Ivey said.

Ivey overviewed her administration’s efforts to slow the spread of the novel coronavirus through her emergency declaration and restrictions like mask-wearing. Ultimately, though, Ivey said reducing the impacts of the virus depends on personal choices.

“This isn’t something that can be mandated and enforced,” Ivey said. “Personal responsibility means it is everyone’s responsibility to do what is right. It requires that each of us do our part, whether that be by wearing masks, washing hands or doing our absolute best to social-distance ourselves from one another.”

Recovery from the impacts of the virus will depend on economic livelihood, Ivey said, which is directly connected to work that takes place on the state’s waterways and at the Port of Mobile. Ivey then pointed to aspects of last year’s Rebuild Alabama infrastructure act, which included cost-share funding for the deepening of Mobile Harbor.

“None of that could have been possible without many of you,” Ivey said. “And while this was a great start, there is still much work to be done.”

During afternoon sessions, conference attendees heard a Washington D.C., report from Julie Ufner, president of the National Waterways Conference. John Driscoll, the new director and CEO of the Alabama State Port Authority also addressed the group, outlining the state of the port and growth projects that are in the works. Driscoll joined the port in June.

Driscoll overviewed the major cargoes and commodities that move through the Port of Mobile, both for import and export. The state is a major producer of coal, agricultural products and manufactured goods, with many of those cargoes moved on the state’s inland waterways.

“The economic impact of your business and the business that moves through the Port of Mobile and our connecting facilities is an economic engine,” Driscoll said. “It really is a tremendous, tremendous asset to the people of Alabama and surrounding communities.”

Representatives from the National Weather Service and the National Oceanic and Atmospheric Administration spoke on the 2020 Atlantic hurricane season forecast, as well as details on recovery efforts from recent hurricanes that have impacted the Gulf Coast region. Day two then concluded with a look at the coal industry, led by the Alabama Coal Association’s Patrick Cagle. Despite the move away from coal-burning power generation, metallurgical coal—the type of coal used in the production of steel—is a growing industry for both mining companies in Alabama and the barge and rail companies that transport that coal to the marketplace.

Much like the determination and innovation to move ahead with the WTWA annual meeting, Merrihew said the Black Warrior-Tombigbee Waterway, like the rest of the inland waterway system in the United States, has soldiered on despite the pandemic, with some impacts attributed to reductions in manufacturing and consumption. Merrihew said he hopes quick progress in treating and preventing the spread of the novel coronavirus will lead to increase activity on the waterway.

“A rebound of the world economy is very important for the waterways,” he said. “We’re eager to see vaccines come online so we can get manufacturing going again.”

Merrihew said the association is already looking forward to next year’s annual meeting, which will be held in May 2021 at the Grand Hotel.

Caption for photo: Socially distanced attendees at the annual meeting of the Warrior-Tombigbee Waterway Association. (Photo courtesy of Larry Merrihew)