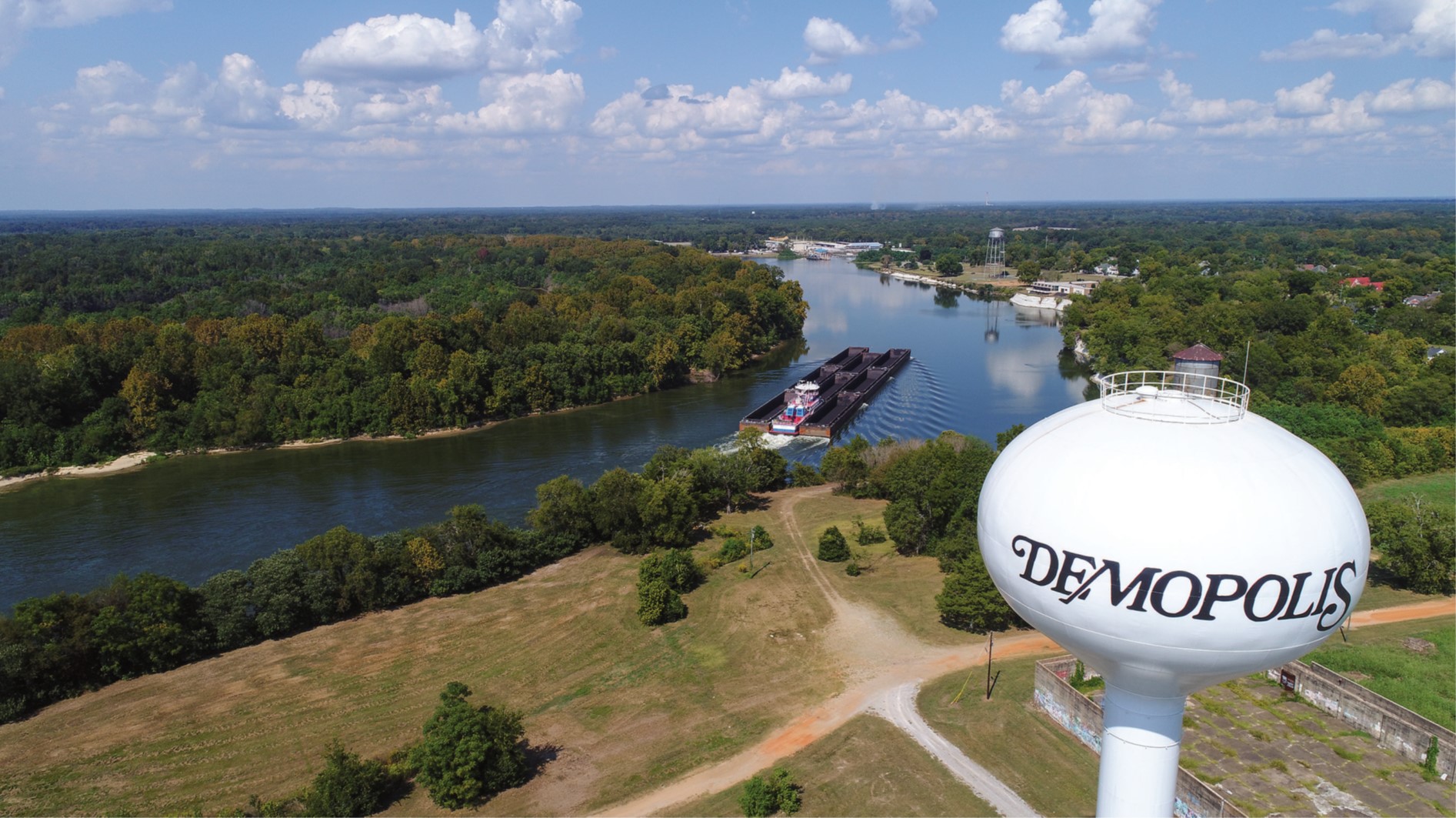 The Tenn-Tom At 35: A Look At One Of The Nation’s Youngest, Most Ambitious Waterways

It was always an ambitious idea.

From the 1700s—when Jean Baptiste Le Moyne, Sieur de Bienville, traveled up the Tombigbee River and, reportedly, envisioned a waterway between Tennessee and the Gulf of Mexico—to the U.S. Army Corps of Engineers’ initial survey and report in 1875, connecting the Tennessee and Tombigbee rivers to create a waterway shortcut to the Gulf was nothing short of ambitious.

Though the Corps did not recommend moving forward in 1875—in part because of the need for channel improvements on the Tennessee and also because of low traffic projections—the idea to connect the two rivers persisted. The route, proponents argued, offered a dramatic shortcut to the Gulf compared to the Mississippi River and would bring vital economic development to rural portions of Mississippi and Alabama.

Close to 75 years later, the project finally gained momentum and congressional approval in 1946, thanks in large part to the efforts of U.S. Sen. John C. Stennis and Rep. Jamie Whitten, both of Mississippi. Two locks on the Tennessee-Tombigbee Waterway (Tenn-Tom) are now named for Stennis and Whitten.

The project received funding in 1970, with construction beginning in 1972. Twelve years later, on December 11, 1984, a dredge finally connected the two rivers. The first vessel traversed the waterway shortly thereafter, and the project was dedicated on June 1, 1985.

Thirty-five years since its dedication, the Tenn-Tom remains one of the youngest waterways in the United States, with much room to grow. For the past five years, the waterway has averaged about 7.9 million tons of cargo annually, with cargoes ranging from coal and petroleum products to aggregates, agricultural products, steel and wood products.

The waterway is home to about a dozen ports, from Yellow Creek State Inland Port at the upper end of the waterway, through the ports along Mississippi’s “Golden Triangle” region, to the Port of Epes near where the waterway joins the Black Warrior-Tombigbee Waterway near Demopolis, Ala. Yellow Creek specializes in products like steel coils and pipe and fabricated steel products and handles about 400,000 tons of cargo per year. One of the port’s newest tenants is Traxys Cometals Processing Inc.

The Raymond D. Lucas Memorial Port, located in West Point, Miss., is one of the larger ports on the waterway, handling agriculture-related products, along with general cargos and bulk cargos. Nearby Lowndes County Port sees scrap metal and steel products, thanks to Steel Dynamics Inc. That port also handles cargo connected with Logistics Services Inc. and Southern Ionics.

Moving south on the waterway, Watco Companies operates a rail, barge and truck facility within the port at Amory, Miss. Watco moves about 400,000 tons annually on the Tenn-Tom, while also loading close to 3,000 railcars. Cargoes include wood pellets bound for power plants in Europe, grains, break bulk, steel manufactured products, calcine sands, coal, ores and cokes. Toward the lower end of the waterway, Pickens County Port, operated by Parker Towing Company, offers more than 11 acres of open storage space and 25,000 square feet of warehousing, with the ability to transfer between truck, barge and rail. Major cargoes include clinker cement, coal, coke, gypsum, fertilizer, sand and aggregates, forest products and cottonseed.

The region boasts a huge forestry industry, with companies like Cooper Marine & Timberlands (CMT) procuring and providing timber products to nearby facilities. CMT supplies hardwood and pine chips to paper mills and recently acquired a sawmill in Carrollton, Ala. CMT offers stevedoring services at a pair of terminals within the Port of Mobile, and Cooper’s Blakeley BoatWorks offers shipyard services in Mobile, with a direct connection to the Tenn-Tom.

Surveying the current operations along the Tenn-Tom and the organic industries in East Mississippi and West Alabama, Mitch Mays, administrator of the Tennessee-Tombigbee Waterway Development Authority, said he sees a wealth of opportunities for the waterway.

“I believe we’ll continue to see an increase in metals, particularly steel, and in forestry,” Mays said. “With that, I think the Tenn-Tom is well-positioned for continued growth, both as existing companies expand and also with new companies coming to the waterway.”

“That’s the kind of development you like to see,” Mays said. “It has such a dynamic effect on the local economy when that kind of foreign investment comes to the local community.”