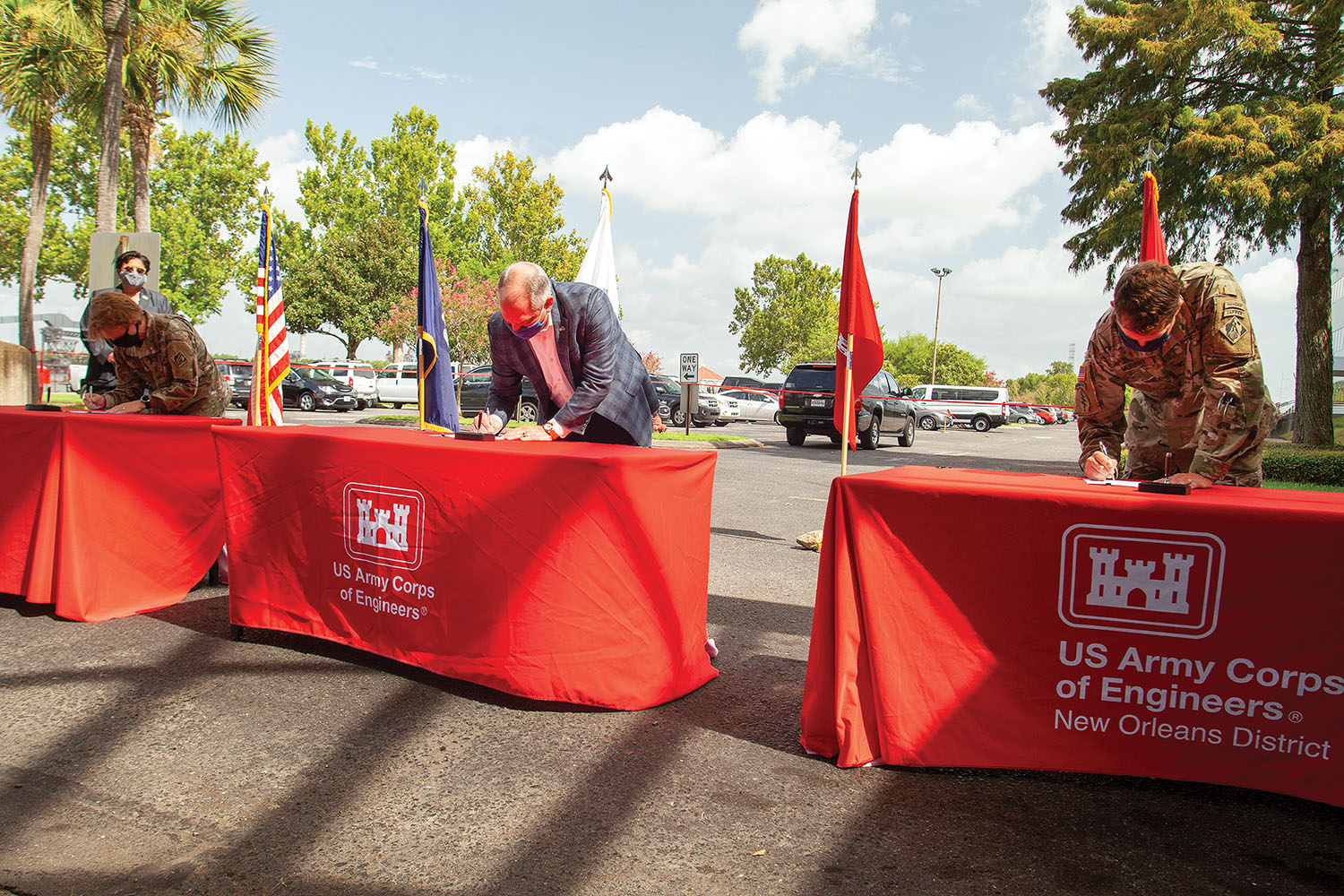 Representatives of the U.S. Army Corps of Engineers and the state of Louisiana met in New Orleans July 31 to sign a project partnership agreement for deepening the Mississippi River Ship Channel from the Gulf of Mexico to Baton Rouge to 50 feet.

Meeting outside at the New Orleans Engineer District headquarters with the Mighty Mississippi at their back, Louisiana Gov. John Bel Edwards; Renee Lapeyrolerie, multimodal commissioner for the state; Maj. Gen. Dianna Holland, commander of the Corps’ Mississippi Valley Division; and Col. Stephen Murphy, commander of the New Orleans District, all praised the benefits of the $237 million project—and the collaborative effort to make the project a reality. The project covers just the final 256 miles of the river, but deepening the river from 45 to 50 feet will benefit the entire nation.

“The river and its tributaries account for over $750 billion of the nation’s economy and more than 2.4 million jobs,” Edwards said. “Here in Louisiana, one in every five jobs is directly or indirectly tied to our ports, and they make up almost 23 percent of the dollar amount of the state’s goods and services.”

For agriculture products grown in the U.S. heartland, the Mississippi River is the primary gateway to world market, Lapeyrolerie said.

“According to recent research by the Soy Transportation Coalition, the 256-mile stretch of the Mississippi River from Baton Rouge to the Gulf accounts for 60 percent of U.S. soybean exports, along with 59 percent of corn exports, by far the leading export region for both commodities,” she said.

“With a deepened river,” Edwards said, “that will actually increase to 70 percent, and it’s also why we have by tonnage the largest port in the United States of America, the Port of South Louisiana.”

Lapeyrolerie added that every additional foot of draft available to shippers translates to $1 million in additional cargo per ship. Adding 5 feet of draft, from 45 to 50 feet, will only grow the river’s reach as the most economical point of export, Lapeyrolerie said.

“One study estimates markets using the Mississippi River Ship Channel will move 300 miles to the west and 150 miles to the east, using the less expensive water transportation and connectivity to the larger ships,” she said.

Holland, who also serves as president of the Mississippi River Commission, sought to put that 5-foot increase in available draft into perspective.

“Translated into capacity of this strategic channel, an additional 5 feet can make the difference of more than $125 million annually in net benefit,” she said. “This is truly a worthy investment, and the Corps of Engineers is proud to be a part of it.”

And with that annual net benefit, Murphy said, the deepening project will pay for itself in just two years.

Moving the deepening project from study to approval and on to appropriation took a team effort. Holland and Murphy both thanked Louisiana Transportation Secretary Shawn Wilson and representatives of the Louisiana Department of Transportation and Development, the official nonfederal cost-share partner for the deepening project. They also thanked the Soy Transportation Coalition and Mike Steenhoek, executive director of the coalition, for advocating for the project. Just over a year ago, the United Soybean Board announced it would allocate $2 million to offset the planning, design and research costs of the project. Both Holland and Murphy also thanked the Big River Coalition and its executive director, Sean Duffy.

“Finally, I’d be remiss if I didn’t specifically thank the many members of Congress and their staff who, because they understood the strategic value of this project, not just to the state of Louisiana but to the entire nation, advocated and advocated very recently for it to receive the funding that allows us to be here today,” Murphy said. “No Corps of Engineers civil works project sees the light of day without authorization or appropriation, and their engagement and cooperation helped get us across the goal line.”

Murphy said an important part of the deepening work at Southwest Pass will be the ability to beneficially use dredged material there.

“If you didn’t know it, over the last 10 years, the Corps has built more than 14.5 square miles of new land on the Louisiana coast, more than any other agency,” Murphy said. “And this project will produce about 1,400 to 1,500 more acres using the sediment we dredge from the river.”

Industry leaders on the Lower Mississippi River praised the start of the deepening project.

“This monumental agreement would not have been possible without the leadership of Gov. Edwards, the Louisiana legislature and the entire Louisiana congressional delegation, who have been steadfast in their support of this critical project,” Port of New Orleans President and CEO Brandy Christian said. “In addition, the importance of the work of the Big River Coalition, comprised of ports, government agencies and trade associations along the entirety of the river, cannot be overstated. One in five jobs in Louisiana is tied to our ports, and this project will help to make our world-renowned port system even more competitive, while creating opportunities for manufacturers, shippers, growers and producers who rely on the Mississippi River.”

“The deepening of the ship channel to 50 feet is a historic project that will bring the nation’s most prolific artery of trade into the modern post-Panamax era,” Duffy said. “The deepening will offer significant cost savings to shippers and promote economy-of-scale efficiencies that will help stimulate trade for decades. The coalition applauds the U.S. Army Corps of Engineers and Louisiana Department of Transportation and Development for their professional support and recognizes the unwavering commitment from the navigation industry across the Mississippi River Basin.”

“The lower Mississippi River is the No. 1 export region for America’s soybean and corn farmers,” said Steenhoek. “Enhancing the Mississippi River simultaneously enhances the competitiveness and profitability of American agriculture. Encouraging this collaborative approach is not only beneficial to farmers and others reliant upon the river, but it also shares the non-federal cost of this project beyond the people of Louisiana. I am proud that the state of Louisiana is partnering with the farmer leaders of the United Soybean Board, the Soy Transportation Coalition and others in promoting this project of national significance.”

“The Mississippi River is America’s greatest natural resource,” said Paul Aucoin, executive director of the Port of South Louisiana. “Today’s announcement ensures that Louisiana ports and agricultural products from the Midwest remain competitive in the global marketplace. In fact, the Mississippi River connects 31 states to the world, and 60 percent of all grain exported from the U.S. is shipped via the river.

“I applaud the governor for his tireless leadership and want to thank everyone who contributed to this historic accomplishment,” Aucoin added. “It’s my hope that a fully dredged river will power our nation’s economy and help us recover from this terrible economic downturn caused by the pandemic.”