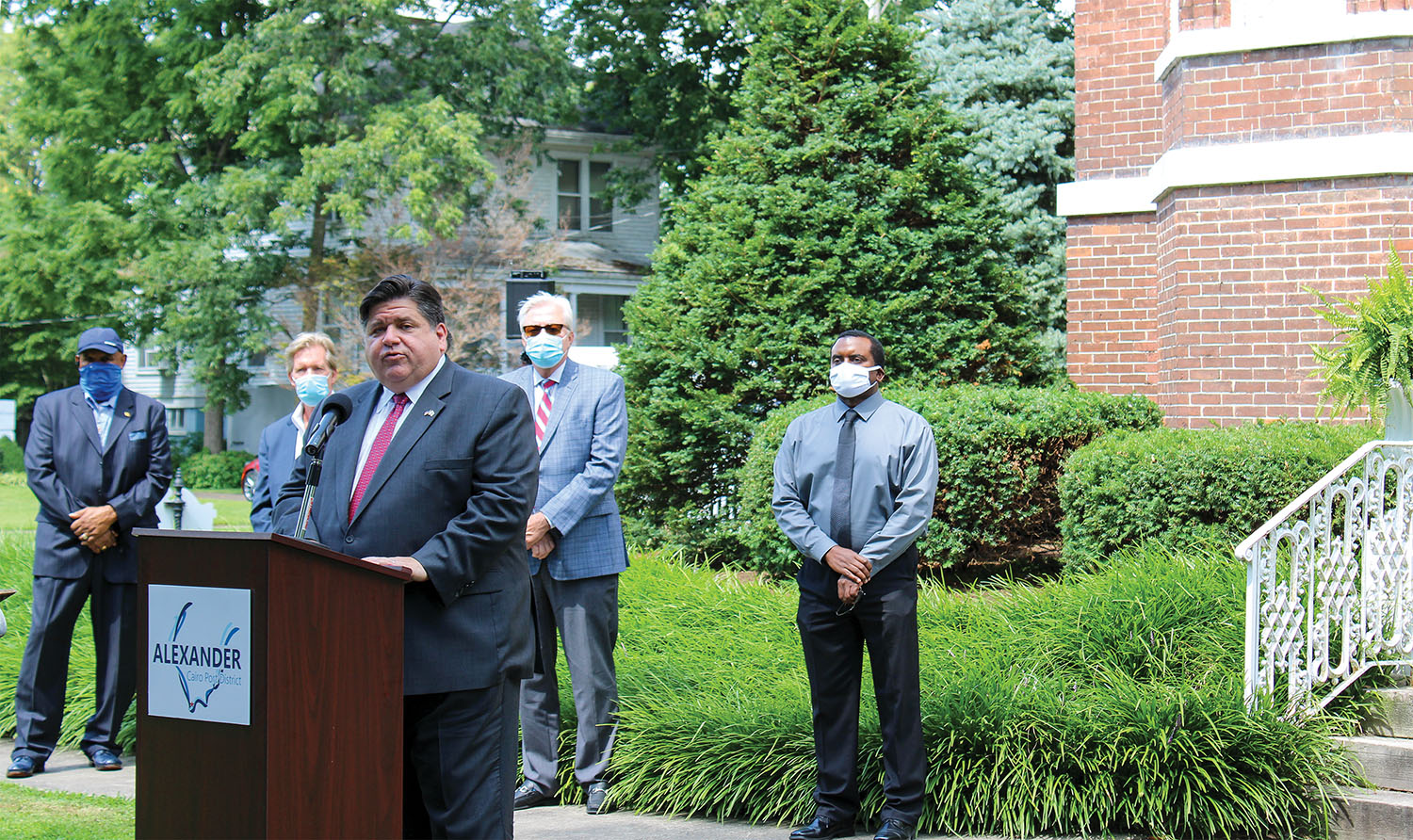 The state of Illinois is providing $40 million to the Alexander-Cairo Port District to build a riverport near the confluence of the Mississippi and Ohio rivers.

Illinois Gov. J.B. Pritzker made the port funding announcement in a ceremony August 4 at Magnolia Manor in Cairo, Ill. He also announced the immediate release of $4 million to fund final engineering, permitting and site preparation.

The port terminal is to be built west of Cairo at Mississippi River Mile 5.7 on the left descending bank, an area commonly known as Eliza Point. It is slated for 350 acres of land owned by the city of Cairo and managed by the Cairo Public Utility Company, the city’s nonprofit electric, gas and internet provider.

“Sitting at the intersection of North America’s two greatest, largest rivers, Cairo represents an enormous economic opportunity for investors, for the state of Illinois and for our working families,” Pritzker said during the ceremony. “Eighty percent of inland barge traffic passes by this city every day. That represents a wealth of untapped potential sailing by, but not any longer.”

Although there is not room for a slack-water port, the area does have consistent deep water, about 50 feet deeper than the Cairo gauge, said Larry Klein, chairman of the port district, which has existed on paper since 2010 and had a full complement of officers since 2014.

The district has worked for eight years to obtain funding for the port, receiving a $1 million allocation in the state budget in 2018 along with a $100,000 grant from the Rauner Family Foundation that allowed preliminary planning, design and engineering work as well as the beginning of a lengthy environmental permitting process that includes soil composition, endangered species and archeological assessments.

State Sen. Dale Fowler, whom Pritzker referred to as key in the bipartisan effort pushing for the port, referred to a Northern Illinois University economic impact study that showed the port’s construction will create 500 jobs and more than $100 million in economic activity, along with additional ancillary business creation opportunities.

“Thank you to everyone who never gave up hope and has supported and worked to make this day a reality,” Fowler said. “Today we begin the mission of establishing Cairo, Ill., as the nation’s hub for riverport transportation opportunities, which will upon completion be one of the largest economic development investments made in southern Illinois in decades.”

He noted that the Cairo port will be able to reach 100 million people within eight hours. It also will allow freight transportation straight to the Gulf of Mexico without any locking required.

“The confluence of these two great rivers is where business opportunity and development meet,” Fowler said. “There is so much potential in this port and so much room for growth and development found right here in our own back yard.”

Fowler also touted the port’s location as being a prime one to take advantage of container-on-barge shipping, which he said is projected to double by 2030.

The port district has already entered into a three-way memorandum of understanding with shipping company American Patriot and Plaquemines Port Harbor & Terminal District in Belle Chasse, La. The memorandum outlines a plan to promote the new port and the Plaquemines port with the ultimate goal of American Patriot instituting container-on-vessel service. The agreement in the memorandum is not binding, however, nor does it include specifics as to the quantity of containers that could be moved along the route or the frequency of service.

Fowler said earlier this year that he has had discussions with four or five other companies interested in the possibility of locating at the Cairo port.

“We’re jumping over the last hurdle,” he said at the August 4 ceremony.

The property includes a no-longer-used spur of the Canadian National Railway, which still utilizes nearby rail and river crossings. The port district has already been in discussion with the railway about returning short-line rail access to the port property.

The port funding is through the state’s Rebuild Illinois capital plan.

“Rebuild Illinois is really about investing in the long-term impact so that we can have true economic success for our entire state, and this port project has the potential to represent the very best of our state’s future because this is more than just a port,” Pritzker said. “It’s also fuel for new jobs and newfound economic prosperity all across this region, a region that’s been left out and left behind for far too long. This will lift up farmers and industry across the region.”

Todd Ely, the lead consultant for the port district and president of Ely Consulting Group of Springfield, Ill., said the port will need a total capital investment of $125 million to $150 million made possible by public-private partnerships.

The port has already received permission from the Corps to clear an initial 150 acres, and that work should begin quickly, he said. He said he expected formal commitments with private industry to be signed by the year’s end and for formal application for the port’s construction to be submitted in January to the Corps of Engineers.

All plans will be entirely market driven, he said.

Ely also praised the port’s location, noting that unlike other Midwestern ports, the Cairo port has the advantage of being protected from flooding by recently reinforced, 500-year floodplain levees as well as having a deep, ice-free site year-round. The site is also within close proximity of three interstate highways–I-57, I-55 and I-24,–and class 1 railroad lines.

Cairo Mayor Thomas Simpson envisions the jobs created at the port leading to other new business development. Cairo had a population of around 15,000 in the early 1960s before economic and racial tensions came to a head. The population has dwindled to fewer than 2,000 people today. The city no longer has a grocery or a pharmacy, and many buildings are derelict.

“This port is going to breathe new life into Cairo,” Simpson said.

The river industry is already familiar with Cairo, with more tonnage and volume passing through the confluence of the Mississippi and Ohio rivers annually than the Panama Canal, as Fowler has repeated several times.

Despite the current lack of a public port, American Commercial Barge Line, CGB Waterfront Services LLC and American River Transportation Company (ARTCO) have fleeting facilities in or near Cairo, and the Economy Boat Store is located across the Ohio River in Wickliffe, Ky. Archer Daniels Midland (ADM) and CGB have grain terminals in nearby Mound City, Ill., and Bunge North America has its soybean processing facility within Cairo’s city limits.

The port would add barge unloading facilities and multi-modal transportation.

Mark Knoy, president and CEO of American Commercial Barge Line, noted that ACBL has had its Cairo fleeting facility for nearly 50 years.

The river industry as a whole moves nearly 500 million tons of freight annually, he said, adding, “We’re anxiously awaiting the opportunity to support the new port in Cairo.”

Pritzker said the project is one of the largest projects in southern Illinois in a generation.

“Already, Illinois is a global hub for the nation’s commerce and transportation,” he said. “The construction of this port builds on that status, establishing Cairo as a national hub for the shipping and logistics industry and anchoring a new link between the Midwest and global markets, and it’s all right here in southern Illinois. As a public-private partnership, the port district demonstrates how we can magnify positive economic results when government and business work together.”

Caption for photo: Illinois Gov. J.B. Pritzker announces $40 million in funding to the Alexander-Cairo Port District to build a riverport near the confluence of the Mississippi and Ohio rivers, just west of Cairo, Ill. (Photo by Shelley Byrne)