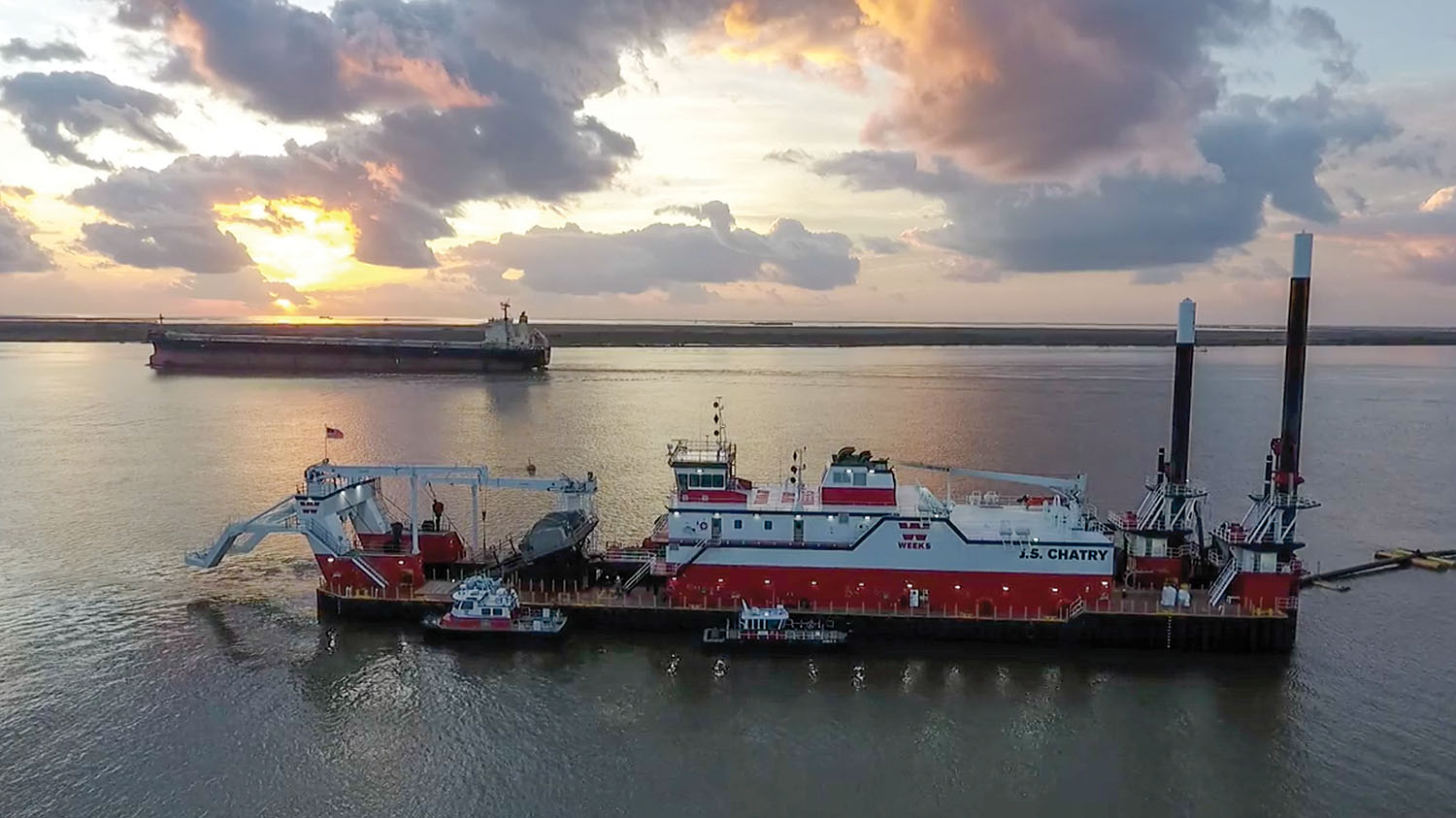 The 1984 World’s Fair in New Orleans carried the theme “fresh water as a source of life.” It’s a maxim borne out over the years in south Louisiana by the communities and industries that crowd the state’s rivers and canals. Many communities draw their drinking water from those same rivers. And for Louisiana, one out of five jobs are connected to the maritime industry.

But it’s not just the water pulsing through the rivers that’s a source of life for the state. Particularly for Louisiana’s coastal region, the sediment pluming its way toward the Gulf of Mexico is a source of life—and new land. Nowhere is that more evident than in the birdfoot delta, near the mouth of the Mississippi River.

There, as part of the U.S. Army Corps of Engineers’ annual dredge program to maintain the Mississippi River Ship Channel, the Corps and its partners have beneficially used dredged material to restore or rebuild more than 10,000 acres of wetlands over the past 11 years. By all accounts, it’s the largest wetlands restoration project in the world.

The Corps accomplishes its dredging needs in and around Southwest Pass with cutterhead dredges (also called pipeline dredges) and hopper dredges. Hopper dredges pump material into the ship’s hull. Once the hopper is full, the dredge moves to a disposal site and empties the hold. In contrast, cutterhead dredges remove the material and pump it out of the channel via a pipeline that is directed to an approved disposal area.  The disposal areas are designed to restore or create critical wetland habitats in the immediate area.

By law, the Corps and its contractors must dispose of dredged material in the most cost-effective and environmentally responsible way. To meet that federal standard, hopper dredges working in Southwest Pass south of Mile 10 below Head of Passes take that material to the offshore Ocean Dredged Material Disposal Site (ODMDS). Material dredged by hoppers above that point is taken to what’s called the Head of Passes Hopper Dredge Disposal Area (HDDA).

From the mid 1990s to the early 2000s, cutterhead dredges were rarely used in Southwest Pass and in the vicinity of Head of Passes. Jeff Corbino, environmental specialist for the New Orleans Engineer District, said a combination of factors made cutterheads scarce in that part of the river for a time. Cutterheads, unlike hopper dredges, are relatively immobile, and with anchored pipelines and assist boats, operating a cutterhead in a narrow waterway can pose navigational challenges. Also, because the river historically would scour the HDDA, cutterheads were rarely needed to dredge the Hopper Dredge Disposal Area.

Those factors began to change in the early 2000s, Corbino said.

“The river is not static, so we react to whatever conditions the river throws at us,” Corbino said, referring to the early 2000s. “That’s when you started seeing us dredging the HDDA area with a pipeline dredge to get that material out of there. It became a necessary thing.”

The use of cutterhead dredges at the HDDA coincided with navigation industry’s desire to increase the beneficial use of dredged material and agreement to let the Corps test a cutterhead dredge on channel maintenance in Southwest Pass. This was one of the ideas that came out of the Beneficial Use of Dredged Material Subcommittee that Sean Duffy, executive director of the Big River Coalition, formed in 2007.  The subcommittee was a diverse group advocating to assist the Corps in receiving Coastal Zone Consistency from the Louisiana Department of Natural Resources (LDNR) that led to the use of cutterheads in the Pass. In 2009, the cutterhead dredge E.W. Elleefsen was used to dredge in Southwest Pass, and with it, serious land-building got underway in the birdfoot delta.

“As soon as it was done, I started getting calls from pilots saying, ‘Man, this is great. You should see all the acreage this created,’” Duffy recalled of the initial work in 2009. “And that was only 100 acres.”

Cutterheads were now pumping sediment directly from Southwest Pass or the HDDA to the delta, and the new acreage from the beneficial use of that dredged material quickly began to stack up. Between 2009 and 2012, 1,445 acres were built from material dredged in Southwest Pass and the HDDA. That number almost doubled in 2013 alone, with 1,417 total acres placed in the birdfoot delta. From 2014 to 2018, the total acreage was close to 4,800, and in the past two years of dredging, the Corps estimates more than 3,000 acres built from the beneficial use of dredged material in and around Southwest Pass.

“From a coastal restoration standpoint, you now have all that sediment that was once being dispersed out of the passes now being purposely placed in the marsh to build wetlands,” Corbino said. “At the same time, it still is cheaper for us to maintain the river that way. This combination of hopper dredges and cutterheads and the near-annual clearing out of the HDDA is still the cheapest way for us to keep the river open.”

The effort is a partnership between the Corps, LDNR, Louisiana Department of Wildlife and Fisheries, U.S. Fish and Wildlife, pilots, navigation and dredge industry representatives, owners and the management of both the Delta National Wildlife Refuge and the Pass-a-Loutre State Wildlife Management Area, where much of the material is placed. Each year, the Corps coordinates with landholders in the area on where to pump the dredged material and how best to contour the new land.

Over the past 12 years, 10,665 acres have been built. That’s more than 16.6 square miles, or the equivalent of 25 French Quarters. With the use of cutterheads in Southwest Pass and the HDDA, close to 80 percent of the material dredged to keep the Mississippi River Ship Channel open near the river’s mouth can be used beneficially.

And the acreage numbers will go up even more in the coming years as the Corps deepens the Mississippi River Ship Channel to 50 feet.

“With the deepening, we will recreate another 1,500 acres of land in that area,” said Mark Wingate, deputy district engineer for the New Orleans District. “That area is just well suited, because you’re dredging there constantly, you’re very close to the wetlands and you have very limited infrastructure.”

In a state grappling with a coastal region rapidly disappearing because of subsidence, erosion and rising seas—and with the state of Louisiana undertaking billions of dollars in restoration projects to slow that loss—the massive land-building venture at Southwest Pass stands out as the most successful and most visible enterprise yet. What’s more, it’s come at no cost to the state and no added cost to the Corps.

“The increased acreage along the channel edges of Southwest Pass and the ship channel below Venice helps to fortify the extreme lower river from the impact of storm surge and the encroachment of the Gulf of Mexico,” Duffy said in a message to stakeholders. “The Big River Coalition would like to thank the U.S. Army Corps of Engineers for their leadership and dedication to work with stakeholders to increase the beneficial use of dredged material for coastal restoration purposes.

“The Big River Coalition is proud of the success of this beneficial use program that we refer to as ‘sediment recycling,’” he added.

Duffy went on to thank the members of the Beneficial Use of Dredge Material Subcommittee.

“The subcommittee truly formed the foundation upon which this acreage was restored,” Duffy said. “Everyone wanted to increase beneficial use, but no one ever thought we would restore 10,000 acres in 10 years.

“I get quoted a lot about waterways management being a team sport and, in this case, it truly is, with the Corps as the quarterback surrounded by skilled players from the unique mix of talent of the subcommittee,” he said.

Caption for top photo: A ship passes the Weeks Marine cutterhead dredge J.S. Chatry as it works in Southwest Pass near the mouth of the Mississippi River. (Photo courtesy of Big River Coalition/P.J. Hahn)