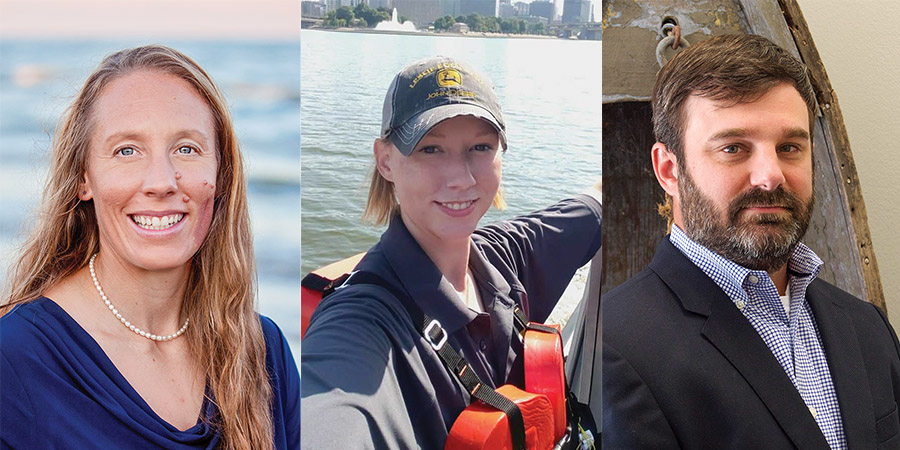 40 Under 40 Awards: Price, Provins And Richard

Over the course of 14 weeks, The Waterways Journal is featuring all 40 recipients. This week we recognize Lindsay Price, Eileen Provins and Brian Richard.

Lindsay Price, 35, is a captain with G&H Towing Company of Galveston, Texas.

Seven people from four different companies nominated Price for the 40 Under 40 Award. They spoke about her leadership, her commitment to mentoring others, her work ethic and her level of expertise.

Price has worked at G&H Towing since 2007. She was one of the first college graduates hired at the company and the first female officer. Price was promoted to captain in 2011.

“Through her hard work and dedication, she proved herself within the company and was the first female promoted to captain,” said Bob Milmoe, G&H director of compliance. “Since that time, she has become one of G&H’s senior captains and designated examiners. She has been a part of bringing new tugboats out of the shipyard for the past five years and recognized within the company for her work ethic and training skills.”

Milmoe talked about personally seeing Price using her knowledge of the company’s Towing Safety Management System during audits, U.S. Coast Guard inspections, safety inspections and for Certificates of Inspection. “She is a natural leader and sets high standards for herself, always going above and beyond to help others,” he said.

Julie Schaeffer, a G&H mate, said of Price, “She works harder than anyone I have ever met in my entire life. She constantly fills her day with progress, achievement or goal-oriented activities. I never see her stop or slow down even for a minute. She strives to improve her workplace through improving functionality and communication. She teaches, guides and inspires her crew on a daily basis, setting short-term and long-term goals, working side by side with them to achieve them.”

Schaeffer also noted that Price is a member of or on the board of 10 different marine organizations that support, educate or provide outreach for mariners in the field.

“She is an active participant in all of these organizations,” Schaeffer said. “She speaks often with local high schools to inform about and promote the maritime industry and a career path for young people who might not have known about it otherwise.”

“Through WomenOffshore, she mentors young women entering the industry and guides them to successful careers,” Manthey said. “Her dedication and respect is well known in the industry.”

Travis Golightly, an able-bodied seaman for Maersk, met Price when he was assigned to her boat for watch, working on the opposite shift. He remembered how welcoming she was and that she made sure to show him around the vessel, pointing out all the safety hazards.

“When Capt. Price returned to the vessel for her next shift, she found out that I had not been assigned to a vessel as an Able Bodied Seaman (AB) and requested that I be put on her boat under her supervision,” he said. He worked with her for nearly two years.

“Capt. Price is completely selfless and always makes sure others get the answers they need in a timely manner,” he said. “She treats everyone equally and works just as hard if not harder than anyone onboard the tug. She is a strong leader and very deserving of this award.”

G&H Port Engineer Jason DeWitt said, “I have not known a more kind hearted, hard working individual in all my life.”

Eileen Provins, 30, is manager of crewing for Campbell Transportation Company in Houston, Pa.

She previously served as logistics coordinator for Campbell before being promoted to operations coordinator and then to her current position in September 2019.

John Cavins, a port captain for Campbell, said Provins cares deeply about her employees as well as the marine industry.

“She goes above and beyond daily with trying to recruit and retain new talent for our company,” he said. “I’m a 25-year veteran of the industry, and I love seeing people with the same passion I’ve always had for the industry.”

Cavins said that attitude sets her apart from others, making her stand out as a leader.

He said, “Eileen is a bright and shiny star for the industry.”

He is also an owner partner of the organization and has held previous roles as logistics coordinator, in quality assurance and as an accountant since joining the company in 2010.

Richard is a 2006 graduate of Southeastern Louisiana University with a bachelor of science degree in accounting. He completed his certified public accountant examination in 2012.

Along with his role at Team Services, Richard is an active member in The American Waterways Operators, ALMA/American Equities Underwriters and Junior Achievement. He is from Thibodaux, La., and currently lives in Baton Rouge with his wife and three daughters.

“During his tenure as CFO and part owner of Team Services, the company has increased its sales numbers and staff,” said Will Hayes, director of marketing and business development for the firm.

He believes Richard’s leadership will have a continued role in the company’s growth.