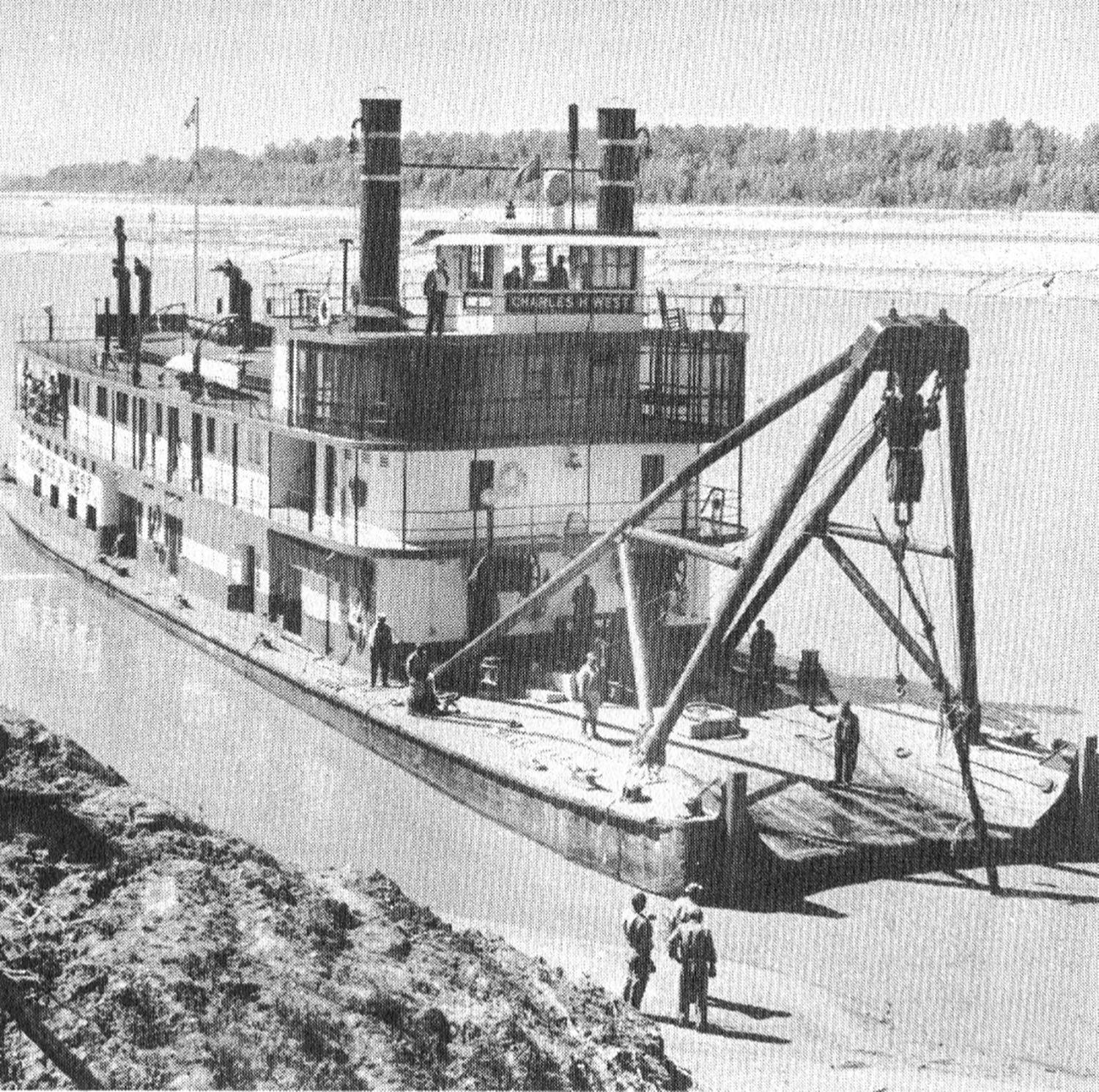 In last week’s Old Boat Column image of the St. Louis riverfront in 1970, one of the vessels prominently in view was the restaurant boat Lt. Robert E. Lee.

Originally the snagboat Charles H. West, the sternwheeler was built for the Vicksburg Engineer District in 1934 at Nashville, Tenn., by the Nashville Bridge Company. Constructed on a 27-compartmented steel hull measuring 195 feet in length by 38 feet in width, the West was the largest steamboat ever built by the firm. Two Foster-Wheeler boilers provided steam (250 pounds at 65 degrees superheat) to compound engines, built by the Iowa Machine Works, having 14 and 28-inch cylinders with a 6-foot stroke. The paddlewheel was 19 feet in diameter with 14 bucket planks.

The boat was named for a longtime member of the Mississippi River Commission.

In 1954, the riverboat was making a weekly trip between Vicksburg and Greenville, maintaining the channel. The West was one of only a few 20th century steamboats to ascend the Red River above Alexandria, La.

Decommissioned in 1958, the retired riverboat served for a time as a floating warehouse and office for the Eagle Boat Store at the foot of Carr Street on the St. Louis waterfront near the Eads Bridge. Managed by Fred H. Leyhe, son of Capt. W.H. “Buck” Leyhe, this well-known chandlery—founded in 1837 and originally owned by Ward & Brady—was long operated by the Leyhe family, beginning in 1895. The business eventually evolved into Eagle Marine Industries. (For more on the Eagle Boat Store, see the Old Boat Column of June 8.)

In 1969, the West was taken to Greenville, Miss., where the United American Construction Company converted it into an elegant restaurant boat named Lt. Robert E. Lee for the James B. Eads Corporation, of which Fred Leyhe was president. The boat was named in tribute to the famed military man, Robert E. Lee, who as a young officer was stationed at St. Louis and is credited with having saved the city as a major port by designing a system of pilings to keep the Mississippi River in its channel.

The Lee was christened during a gala ceremony on March 31, 1970, by Mary Leyhe Burke and her sister, Nancy Louise Leyhe, daughters of Fred and Louise Leyhe. The riverboat represented a continuation of a Leyhe family tradition begun in 1861 when William and Henry Leyhe built an 84-foot sternwheeler named Young Eagle. The last steamboat operated by the family was the famed Golden Eagle, which sank at Grand Tower Island in 1947.

The Lt. Robert E. Lee closed on the levee in 1993 and changed ownership several times before moving downriver in 2004 to Kimmswick, Mo., where it remained until 2006. Towed back to St.

Louis and sold at auction in 2008, the riverboat was undergoing renovation for a rebirth as a restaurant at St. Charles, Mo. Moored in a repair yard at the foot of North Market Street in St. Louis, the Lee was  destroyed by a horrific fire on the afternoon of Sunday, March 21, 2010. No injuries were reported, and all that remained of the boat was the hull and paddlewheel.