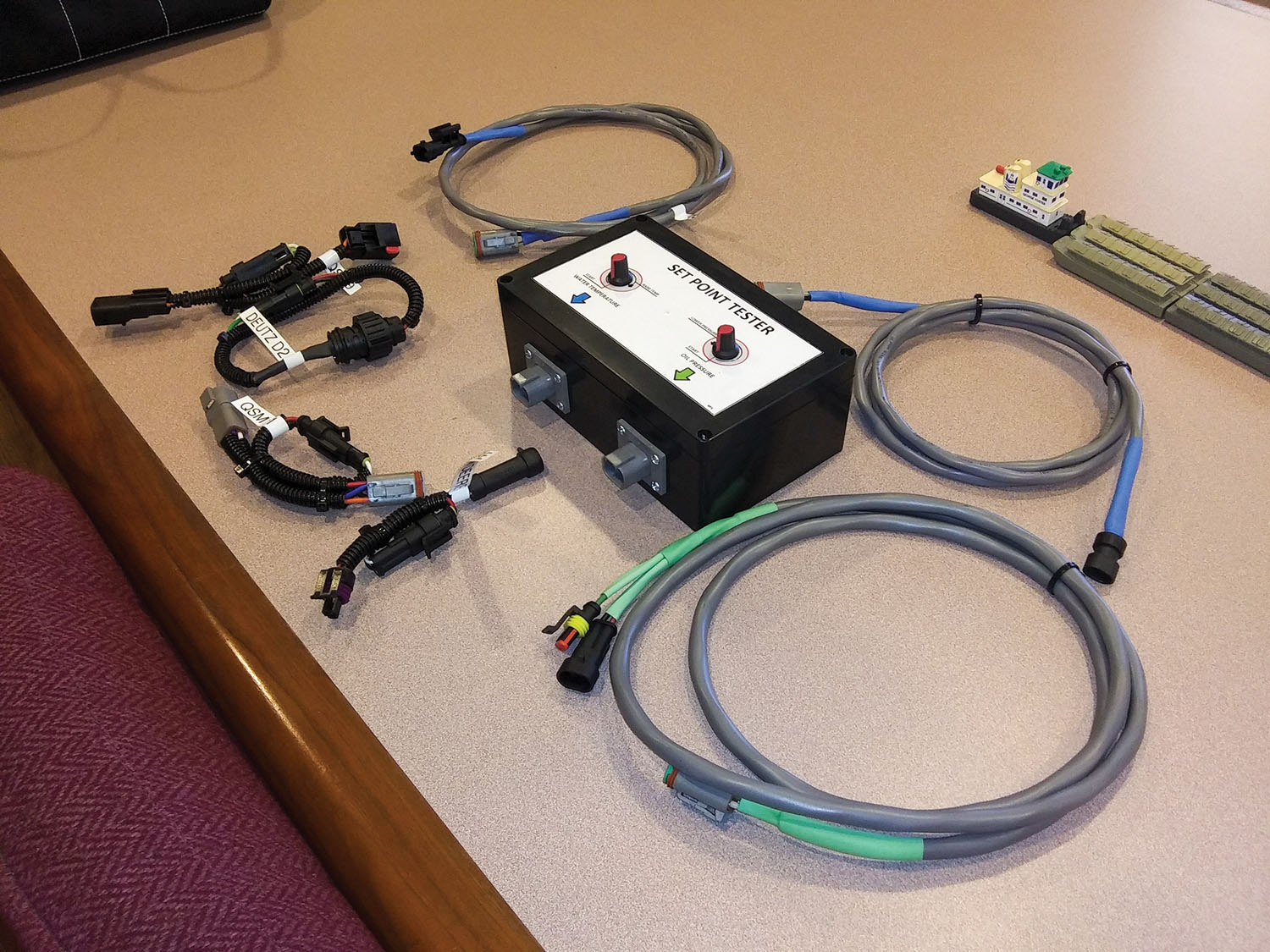 By late May, Jerry Brown had a problem. As a port engineer for JB Marine Service in St. Louis, Mo., Brown had the responsibility for measuring the “set points” of all the engines on JB Marine’s boats, meaning the water temperature and oil pressure levels at which alarms will activate. It’s part of Subchapter M requirements to record these during an equipment inspection.

For JB Marine, all those test figures were due by December of this year, as part of the Subchapter M inspection schedule. Set points must be recorded twice within a five-year period, with no more than three years intervening between tests. When the testing clock starts depends on when a company inaugurated its towing safety management system (TSMS).

These set points are programmed by the major engine manufacturers. But surprisingly, none of them had an easy way to test them.  They had a method that involved bringing a lot of equipment aboard, running a connector to a can of water and heating it to boiling point, but it was time-consuming and expensive. To check all of the engines in a yard like JB Marine’s would involve hundreds of hours of work and thousands of dollars.

Surely there had to be a better way, Brown thought. “But when I asked the engine companies, they all said it couldn’t be done,” he told The Waterways Journal.  He spoke with mechanics and engineers who said that “back in the old days,” there were some who had rigged up their own set point tests, but there were no standardized solutions.

That didn’t sit right with Brown, so he went to work finding a solution. His bosses at JB Marine were interested and told Brown to go ahead and develop it on his own. He stresses that although he had the help and encouragement of his co-workers, his venture is an independent one not connected with JB Marine.

The result is a small, handy set-point tester Brown calls, simply “Set-Point.” It consists of a box and various connectors. According to a brochure Brown created, it was “developed to check water temperature and oil pressure set points to pass Subchapter M testing requirements.” The tool used existing engine monitoring screens to run tests, make sure all visual and audible alarms on the vessel are working and monitor set point temps and pressures.

The Coast Guard has indicated that for companies with towing safety management systems, it will accept whatever set-point test results the third-party Subchapter M auditors will accept.

The test adapters currently offered for temperature and pressure tests cover these engines:

The brochure adds, “If there is an engine make/model that is not on the list, please contact us, and we will try to get an adapter package together to meet your needs.” The unit can also test generators.

Brown has already filed patent paperwork and is currently making and selling the units out of his garage.

The original sensor sells for $1,750. Brown has also since developed a smaller one he calls “Set Point II.” Without the unit, Brown estimates it might have cost $9,000 to test the nine boats at JB Marine. With the unit, which he says can be quickly learned by anyone, the tests will take five minutes. Brown said he has had a brisk business selling them as fast as he can produce them.

So why haven’t engine companies thought of this before? Brown said the demand just wasn’t there before the Subchapter M testing requirement, and many companies and manufacturers waited to see whether the Coast Guard would suspend that requirement. That didn’t happen, and now some commercial operators are hurrying to catch up with reporting requirements.

When he was working on the patent paperwork, Brown said, he and his friends joked about the chances of his idea being stolen. But while it does save significant amounts of time and money for operators facing a Subchapter M reporting requirement, there’s not much of a market outside of Sub M-inspected vessels.  “There’s no reason that recreational boat owners would want something like this,” Brown said.