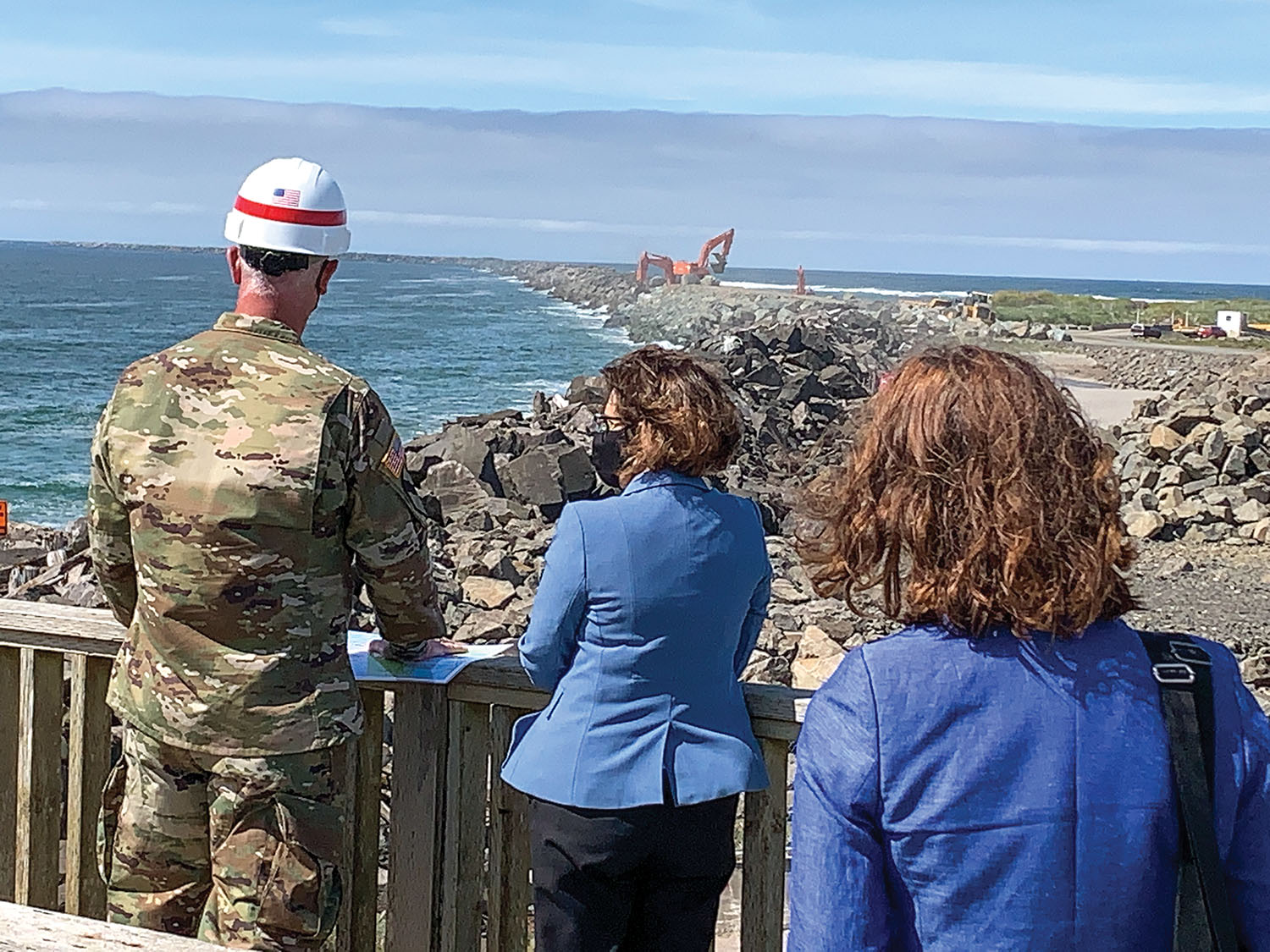 Three members of Congress and lots of heavy equipment joined members of the Pacific Northwest Waterways Association, Corps of Engineers and U.S. Coast Guard leaders August 31 to celebrate the completion of the Mouth of the Columbia River North Jetty and Jetty A Rehabilitation Projects, and the start of work on the South Jetty Rehabilitation Project.

More than 56 million tons of cargo valued at roughly $21 billion move through the lower Columbia River annually, and thousands of Pacific Northwest jobs are dependent on this trade. The Columbia Snake River System is the nation’s largest wheat export gateway, second in the nation for corn and soy exports and tops on the West Coast for wood and mineral exports.

“Products on this river system can travel from as far away as the Midwest and Canada, bound for Asia and other points around the world,” Harlan said. “The jetties are especially important now as our region recovers from the economic impacts of COVID-19; we need to keep U.S. supply chains strong.”

The Mouth of the Columbia River’s jetty system was built between 1885 and 1939. Constructed on massive tidal shoals and totaling 9.7 miles in length, the three rubble-mound jetties minimize navigation channel maintenance and make passage safer for vessels transiting between the Pacific Ocean and the Columbia River.

“These jetties keep the (Columbia River) bar intact,” Smith said. “They are crucial to safe and efficient commerce. Our merchant mariners and fishing fleet are out of business without them.” The jetties are regularly pounded by Pacific Ocean waves 10-20 feet high, with winter storms bringing extreme waves in excess of 30 feet. Storm activity and the loss of the shoaling sand upon which the jetties are built have taken a toll on their structural integrity.

If a critical section of the jetties were breached during a large storm, sand could be deposited into the federal navigation channel, potentially shutting down commercial shipping. Restoring the channel entrance would require expensive emergency jetty repairs and channel dredging.

Under the Corps’ Mouth of the Columbia River Jetty System Major Rehabilitation Project, rehabilitation of the 0.9-mile Jetty A was completed in 2017, and the 2.5-mile North Jetty earlier in 2020.

“It takes a great team of teams to make a project like this happen,” Helton said. “Everyone involved has showed tremendous commitment to delivering this important jetty rehabilitation to the people we serve. The Portland District is proud to be part of it.”The members of Congress in attendance discussed their legislative efforts to keep the jetties funded and maintained and their importance to the region:

“I want to give a special shout-out to PNWA,” said Wyden. “You have made this (the jetties) the No. 1  request of our congressional delegation for years. … You all have zeroed in on them and have mobilized Democrats and Republicans to make it happen. Without those jetties, we cannot have big league quality of life and job creation. It just simply does not happen. In our part of the world, one out of four jobs revolve around international trade.”

“The jetties at the mouth of the Columbia River are a marvel of engineering that sustains the shipping, navigation and fishing industries throughout the region,” Bonamici said. “I have consistently called for full funding for the needed rehabilitation of this critical infrastructure. It’s exciting to see the work beginning where the mighty Columbia meets the Pacific.”