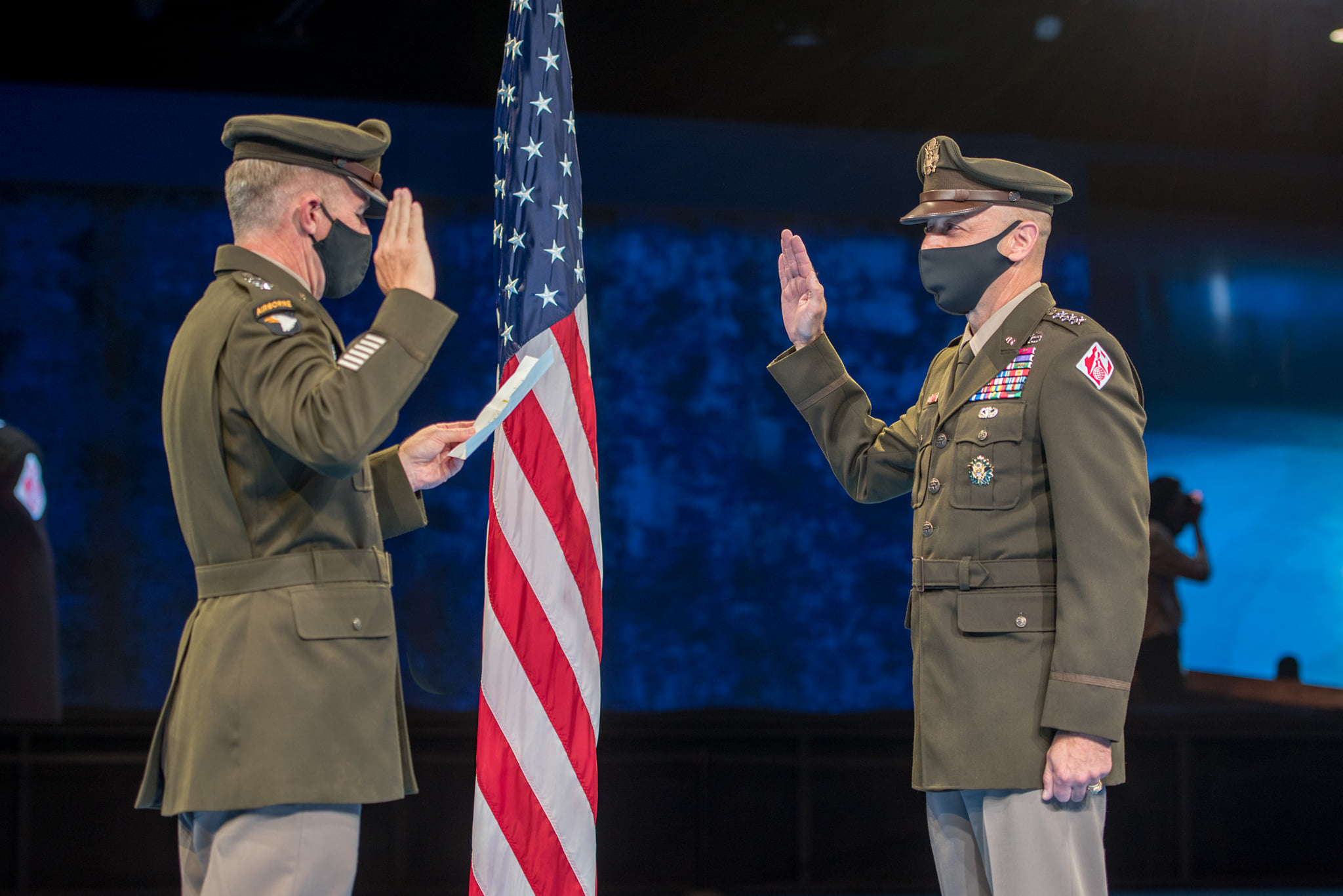 Spellmon Sworn In As Chief Of Engineers

Washington, D.C.—Lt. Gen. Todd Semonite, the 54th Chief of Engineers and Commanding General of the U.S. Army Corps of Engineers since 2016, retired and was succeeded by Lt. Gen. Scott Spellmon September 10.

Preceding a change of command ceremony, Spellmon was honored by a virtual ceremony marking his promotion from major general. He had been the deputy commanding general for civil and emergency operations and previously served as commander of the Northwestern Engineer Division.

Semonite was honored with a retirement ceremony hosted by the chief of staff of the Army.

He also received the 2020 President’s Award from the American Society of Civil Engineers (ASCE) for his prominent role in the Corps’ response to the coronavirus pandemic that included a nationwide effort to build backup hospitals.

“Few leaders I know have accomplished so much for the nation during peace and war as Todd Semonite,” said retired Lt. Gen. Tom Bostick, professional engineer and ASCE Distinguished Member.

“Not only does he find a way to accomplish the impossible. He does so while inspiring his people.” Semonite was awarded ASCE’s OPAL leadership award in the category of Construction in 2019.

During his 40-year career, ASCE noted, the West Point graduate has held significant positions of responsibility with the Army, and his leadership has included disaster response and construction as a result of Superstorm Sandy in the Northeast; construction support to the Southern Command in Central and South America; and program and project management for construction in Iraq and Afghanistan.

Top negotiators for the White House and Congress have agreed to a “clean” continuing resolution (CR) to avoid a government shutdown and keep the federal agencies funded into fiscal year 2021, which begins October 1.

Mnuchin also confirmed the stopgap funding measure will run through the beginning of December. That timeframe would get the matter past the November elections by several weeks.

Mnuchin was speaking not only as a top official for the Trump administration but also its chief negotiator with House Speaker Nancy Pelosi (D-Calif.) over the fiscal year 2021 appropriations as well as the stalled efforts to move another coronavirus relief package.

Later, Pelosi also expressed confidence that a government shutdown will be avoided.

“We will come to an agreement on that. I feel quite certain,” she said on Bloomberg’s Balance of Power.

A CR is never the favorite option for appropriators or federal agencies because it essentially bars funding increases as well as new programs, some of which have been in the works for months and even longer.

There was little choice this year as the current appropriations process had broken down completely with the Democratic-controlled House passing spending bills that Senate Republicans, who control their chamber, said would never be acceptable.

Meanwhile, senators failed to pass any of their 12 annual appropriations bills through committee after they were unable to reach an agreement on how to proceed.

Having members of Congress back in Washington appeared to do little to break the weeks-long impasse over passing another coronavirus relief package.

Senate Majority Leader Mitch McConnell (R-Ky.) announced a vote on a “targeted” proposal that is expected to be about half the size of a $1.3 trillion offer discussed recently by White House Chief of Staff Mark Meadows.

Top Democrats had rejected that offer, as they did McConnell’s offer, as inadequate.

In May, the Democratic-controlled House passed a $3 trillion measure that was dismissed by Republicans.

McConnell set the stage for a vote on the Republican plan before the end of the week.

The Environmental Protection Agency (EPA) announced a $5 million cooperative agreement between the Maritime Administration and the University of Wisconsin-Superior supporting ballast water research as part of its investment in restoring the Great Lakes.

Additional grants also were announced as part of the Great Lakes Restoration Initiative.

Vessel owners and operators are no longer required to submit quarterly reports to the Coast Guard of their discharges of bulk dry cargo residues into U.S. waters of the Great Lakes, according to a clarification from the Office of Operating and Environmental Standards.

Recordkeeping on board is still required, a mariner blog posting stated, adding vessel owners and operators may use their own forms instead of Form CG-33, which has been removed from the CG-OES website.

NMC stated mariners seeking to schedule examinations at those locations may contact them directly.