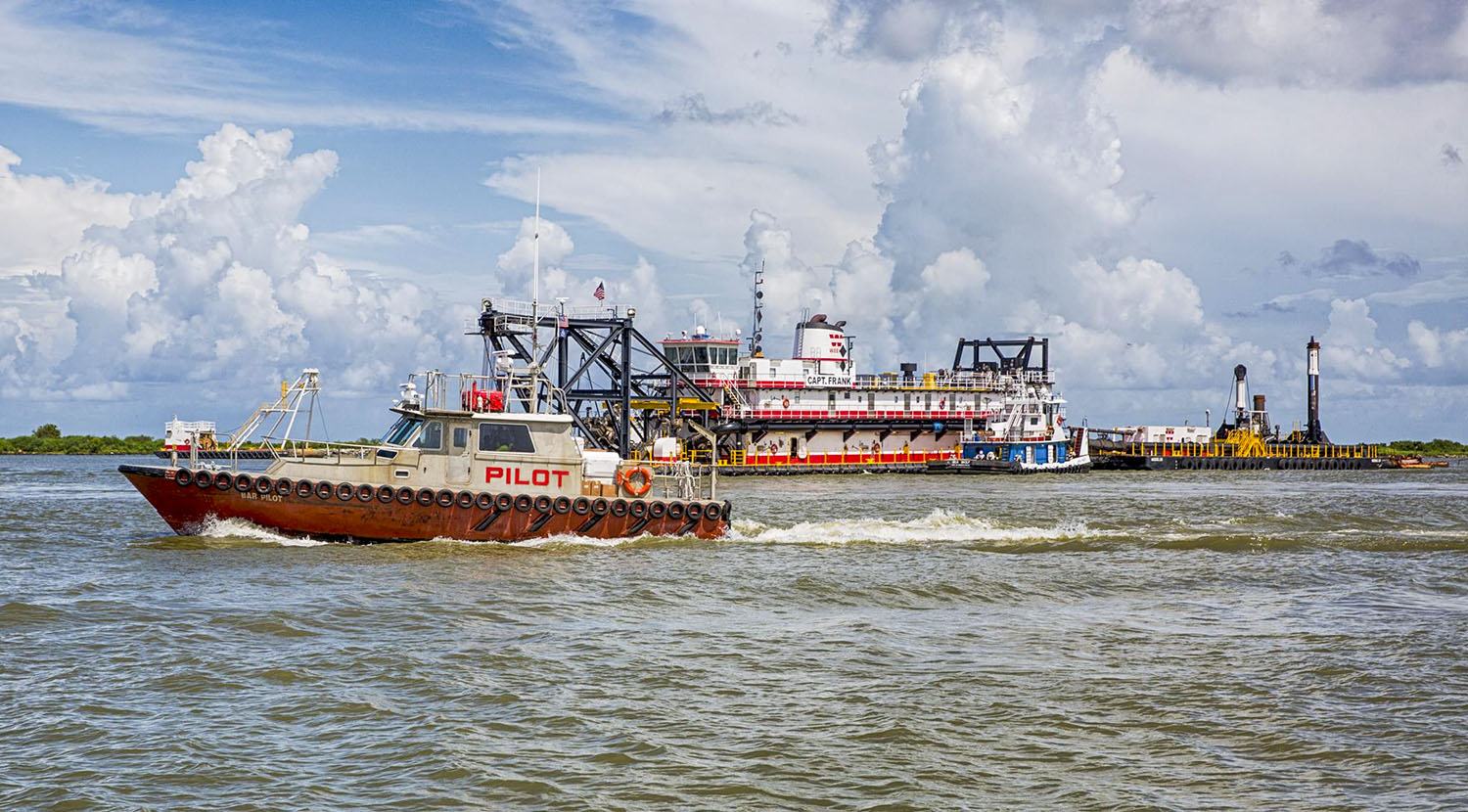 Less than six weeks after the U.S. Army Corps of Engineers and the state of Louisiana signed the project partnership agreement for deepening the Mississippi River Ship Channel from Baton Rouge, La., to the Gulf of Mexico to 50 feet, the New Orleans Engineer District officially launched the deepening project September 11. That’s when the Weeks Marine cutterhead dredge Captain Frank began dredging the channel five miles above Head of Passes.

“This start of this deepening project is a landmark day for our national maritime industry and stakeholders in Louisiana and along the Mississippi River who collaboratively advocated for this national priority,” said Shawn D. Wilson, secretary of the Louisiana Department of Transportation and Development (LDOTD), the official non-federal cost-share partner for the project. “Our tireless advocacy and meaningful investment, along with Gov. Edwards’ commitment to provide a significant financial match, made this long sought-after project a reality.

“Our magnificent Mississippi River that is the life blood of our state’s economy will enable us to further expand global markets for farmers, manufacturers and citizens that depend on imports and exports of goods for jobs and a quality of life,” Wilson added.

The Corps is beginning with Phase 1 of the project, which is focused on dredging Southwest Pass beyond 50 feet. Phase 1 will achieve a 50-foot channel from the Gulf through the Port of New Orleans. The second part of the project will involve dredging a dozen river crossings between New Orleans and Baton Rouge. Elsewhere, the river is naturally deeper than 50 feet.

The Corps awarded the contract for the Captain Frank on September 3, with a second cutterhead contract awarded to Manson Construction less than a week later. In all, three dredges—two cutterheads and one hopper dredge—will be used to establish the 50-foot channel through Southwest Pass.

“This project represents an incredible partnership between the federal government, Congress, industry and the state of Louisiana,” said Col. Stephen Murphy, commander of the New Orleans District. “By deepening the Mississippi River Ship Channel even by just five feet to 50 feet the national economy will see benefits to the tune of approximately $127 million annually. With a benefit-to-cost ratio of 7.2 to one, the project will pay for itself in two years. This is a really great deal for Louisiana and America.”

An added benefit of the Phase 1 deepening is that much of the material dredged from the channel will be used beneficially to build new land in the river’s bird foot delta.

The start to the deepening project was praised by leaders from throughout Louisiana’s maritime industry, from pilots’ associations to ports.

“Our members are excited about the start of the 50-foot deepening, as it will help our port partners become more competitive on a national and international basis as well as contribute to coastal restoration though beneficial use of dredged material,” said Capt. Michael Miller, president of the Associated Branch Pilots (Bar Pilots) and chairman of the Big River Coalition.

“The kickoff of this historic project is exciting for the entire maritime community,” Port of New Orleans President and CEO Brandy Christian said. “It is the culmination of decades of hard work by all stakeholders involved from the Big River Coalition to Congress and the critical support of the state and the U.S. Army Corps. The deepening project will harness the economic power of the river and the most competitive global gateway in the Gulf of Mexico.”

“The deepening of the Mississippi River Ship Channel to 50 feet is a momentous water infrastructure project that will promote increased trade throughout the nation’s interior,” said Sandy Sanders, executive director of the Port of Plaquemines. “The Plaquemines Port Harbor & Terminal District, along with our partners from Plaquemines Parish to the state of Illinois are thrilled to see the deepening project commence.”

“Our nation’s inland waterway system, including the Mississippi River Ship Channel, provides an efficient connection between farmers in the Midwest and customers around the world,” Steenhoek said. “As a result, any effort to improve the channel must not only be regarded as a Louisiana priority, but also a priority for the Midwestern states that feed into it. The Soy Transportation Coalition sincerely appreciates the leadership of the Big River Coalition in promoting the deepening of the Mississippi River Ship Channel and has been pleased to work in collaboration with them in helping the project become a reality.”

The Big River Coalition, under the leadership of executive director Sean Duffy, is credited with building the support needed for the project’s study, authorization and funding.

“The Big River Coalition revitalized efforts to deepen the Mississippi River Ship Channel to 50 Feet in August 2012,” Duffy said. “The project will promote the economic advantages of waterborne commerce to shippers by extending the draw area for shipping down this economic superhighway. The deepened channel will offer increased cost savings to shippers and help the U.S. compete in world markets, enhance the system’s water carrying capacity and increase the flood protection of businesses, farms and homes.

“A deeper channel will create thousands of jobs and restore 1,500 acres of wetlands in the environmentally sensitive birds’ foot delta,” he added. “The deepening of the Mississippi River Ship Channel is truly a historic project that will pay for itself in a few years and generate increased revenues for decades. The Coalition applauds the U.S. Army Corps of Engineers and LDOTD for their professional support and recognizes the unwavering commitment from the navigation industry across the Mississippi River Basin.”