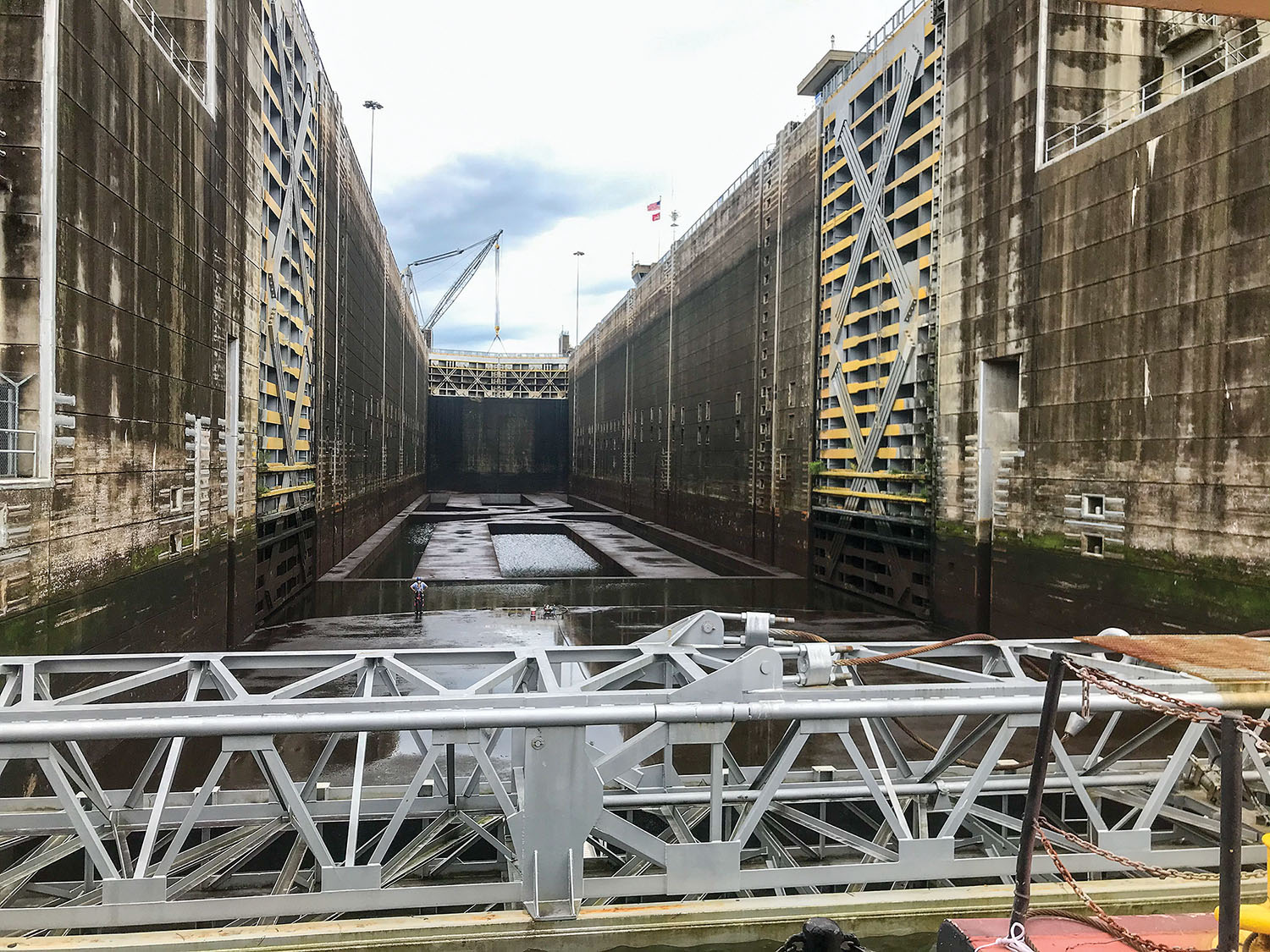 The Tennessee-Tombigbee Waterway, the shortcut between the Tennessee River in the north and Mobile Harbor and the Gulf Intracoastal Waterway in the south, is wrapping up a busy dredging and lock maintenance season, which has all transpired in the midst of operational protocols put in place to slow the spread of COVID-19.

Fiscal year 2020, with close to $46.7 million in Work Plan funds, proved one of the best-funded years for the waterway of late, with $6 million in additional funding for dredging and the scheduled maintenance at Jamie Whitten Lock at the upper end of the waterway. Funding in 2020 also included about $9 million for a new project management office. The new office will be built at the same location as the current facility in Columbus, Miss. The Corps is currently negotiating the contract for the new management center, with construction expected to take from 18 to 24 months. The Corps hopes to award that contract by late November.

Overall, the Tenn-Tom has remained consistent with regard to tonnage statistics, ton miles and lockages over the past five years. The five-year average for annual system tonnage stands at about 7.9 million tons, with 2018 the most recent year available. In both tonnage and ton miles, the waterway saw a dip in 2017, followed by a rise in 2018.

With regard to lockages, the system as a whole saw a drop in use in 2019, due in part to closures resulting from historic shoaling on the waterway last year. From 2017 to 2019, the 10 locks on the system averaged between about 1,200 to just under 1,400 commercial lockages.

“It’s well into the medium-use category,” said Wynne Fuller, operations division chief for the Mobile Engineer District. “We certainly want to be sure to do everything we can to keep it in that area, because that ensures adequate funding for the system.”

Fuller highlighted one unexpected bright spot for the waterway in 2020, a year that has continued to defy expectations not just on the Tenn-Tom but all across the nation and the world. During the pandemic, recreational activity on the waterway has boomed.

“As Americans looking for safe places to recreate, where they spend their money now is where they’re spending their time,” said Fuller, who later added, “I think it’s good for the waterways industry in that it ensures the local communities that support our waterways have a reason to fight for and support these waterways. A towboat may go by them, and they may not see anything out of it, but they’re getting those recreational benefits, and those dollars are being spent in our communities.”

One way waterway managers have adjusted operations during the pandemic has been to move to cashless fee stations, where recreational visitors pay with credit cards instead of placing paper money in drop boxes. Campground reservations have also moved online through the recreation.gov website.

The Tenn-Tom saw a pair of locks closed for maintenance work in 2020. Howell Heflin Lock was closed from July 7 to July 25 for painting and valve work, cathodic protection system repair, crack repair work, and grease line and wall armoring improvements. In addition, the Corps also conducted asbestos abatement work at the lock’s operations building during the closure.

Jamie Whitten Lock was closed to navigation from June 30 through August 12. Major work at that lock, which at 84 feet offers the third-highest lift of any lock east of the Mississippi River, included replacement of webbing on the lower miter gates, culvert ceiling repairs, cathodic protection system repairs and attention to gate cracks, grease lines and lock wall armoring.

“Overall it was a successful closure,” said Justin Murphree, project manager for the Tenn-Tom Waterway. “We made the repairs we needed to, and things went well.”

“Since the ‘90s, every time Whitten Lock is closed, those spots are repaired,” Murphree said. “Usually, by the time we close the lock again, it’s eaten back out, but this year, when we went in there, the damage was worse than we’d seen before.”

Murphree said waterway managers are working with the Corps’ Engineer Research and Development Center to identify a solution to the issue.

“We want a permanent fix for this,” Murphree said. “It may take going in and completely lining that section of the culvert with stainless steel or something along those lines. … We felt that it’s beyond just making a repair again.”

Fuller, Murphree and Anthony Perkins, project manager for the Black Warrior-Tombigbee Waterway (BWT) in Alabama, all noted the impacts of flooding in 2020 and how shoaling on the waterways and an uptick of channel improvement projects and coastal restoration projects in the South have made acquiring dredges increasingly competitive. On the Tenn-Tom, waterway managers identified a need of about 987,000 cubic yards of material to be removed, but due to dredge availability constraints, problem areas were prioritized, with about 442,000 cubic yards removed so far.

Likewise, managers on the BWT have had to prioritize problem spots and have delayed an advance maintenance project near Sunflower, Ala., until 2021.

“We have a lot more heavy shoaling than in the past due to the last two years of flooding, especially this year,” Perkins said. “With a heavy dredge season and completing these critical areas, we will not have time to do Sunflower this year.”

Perkins added that, while Holt Lock near Tuscaloosa experienced an emergency closure in August for removal and replacement of an epoxy coating on the lower miter gate contact block, the BWT will have a pair of closures next year at Oliver and Bankhead locks. Those closures were originally scheduled for this year.

Murphree noted several equipment improvements coming to the Tenn-Tom. The waterway’s service vessel, the mv. Tenn-Tom, will go on drydock this fall for the installation of new gears and to update its generator power.

The waterway’s crane barge, the R.W. Davis, is also set to have its pedestal crane replaced by a new Liebherr 300-ton crawler crane. That work is expected to be complete next year.

Finally, the waterway has begun work to acquire a long-reach excavator with a cutterhead attachment, which will be placed on a new work barge. The 10-inch cutterhead attachment will be able to clear 300 to 350 cubic yards of material per hour, Murphree said, and it will be used to address critical shoaling, like what was seen in 2019. The waterway is also acquiring 2,000 feet of pipe for pumping dredge material.

“For navigation, we will use this for emergency purposes,” Murphree said. “This definitely will not take the place of our normal maintenance dredging. But if we have another situation where we have channel restrictions or like in 2019 when we shut the waterway down, we’ll be able to bring this in and reopen the waterway pretty quick, without having to wait on a dredge.”