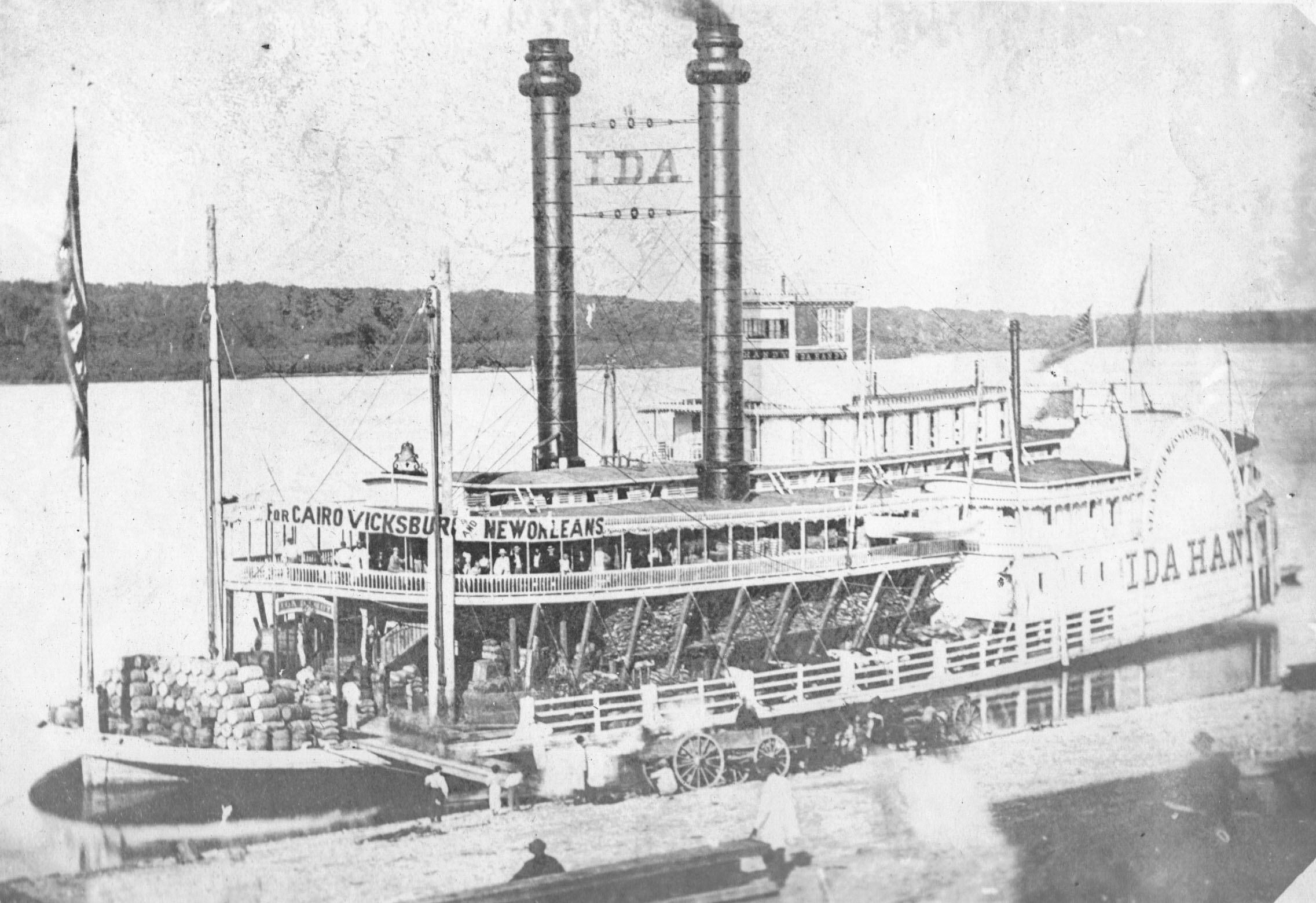 The Ida Handy Was Short-Lived

For 1864, the daybook records for the Howard Shipyard at Jeffersonville, Ind., list only contracts for the construction of a wharfboat for the Louisville & Cincinnati Mail Line and three packet boats, one of which was the Ida Handy.

Built on a wooden hull that measured 258 feet in length, 45 feet in width and a depth of eight feet, the sidewheeler, which was completed at the foot of Fifth Street in Louisville, was homeported at St. Louis, owned by Capt. B. Rush Pegram and a group of investors. Newspaper accounts mention that Capt. D.C. Sheble superintended the construction with Orlando Smith, formerly of the packet Diana, in charge of the office.

On May 22, 1864, local newspapers noted that while the steamboat was downbound on the Ohio River near Rockport, Ind., on its maiden voyage, a raging fire was discovered in the hold. The blaze was extinguished, but it resulted in extensive damage to the freight and to the boat. No loss of life was mentioned.

Inevitably, the Handy became involved in Civil War transport work. It was noted in the press of February 1865 that the boat was the flagship for Gen. Andrew Jackson Smith’s troop movement from Eastport, Tenn., to New Orleans.

Leonard Huber’s book Advertisements of Lower Mississippi Steamboats 1812–1920 contains a reproduced notification that the boat was to depart New Orleans for St. Louis on Tuesday, June 20, 1865, commanded by Capt. Tom Moore, with C.V. Moore presiding in the clerk’s office. At this time, the riverboat was operated by The Atlantic & Mississippi Steam Ship Company, whose name appears in a half circle on the vessel’s paddlewheel box.

In the spring of 1866, the packet-turned-towboat James Raymond moved the sidewheeler Bostona (built in 1854 and which had been sold for debt by a U.S. Marshal) from St. Louis to Memphis. At Island 40, on April 24, the Raymond’s boilers exploded, killing a crew member and doing much damage to the boat. Steam was raised on the Bostona, and it towed the James Raymond back to St. Louis for repairs. On Saturday, June 2, 1866, the Bostona, James Raymond and Ida Handy (only two years old) were all lashed together at the St. Louis levee when fire broke out, destroying all three steamboats. A steam calliope had been mounted on the texas roof of the Raymond, preparatory to that vessel towing the Spaulding and Rogers’ Floating Circus on a river tour later that year. Reportedly the first calliope designated for showboat use, the instrument was lost in the blaze.

There is no definitive evidence as to the exact location of this week’s Old Boat Column image. Through the decades it has been speculated by river historians that the Ida Handy, undoubtedly a new boat in the accompanying view, is either at Cairo, Ill., or Helena, Ark. Note the large flag featuring the boat’s name, in white lettering on a dark background, furled around the forward jackstaff.

Caption for photo: The only known image of the steamer Ida Handy. (Keith Norrington collection)