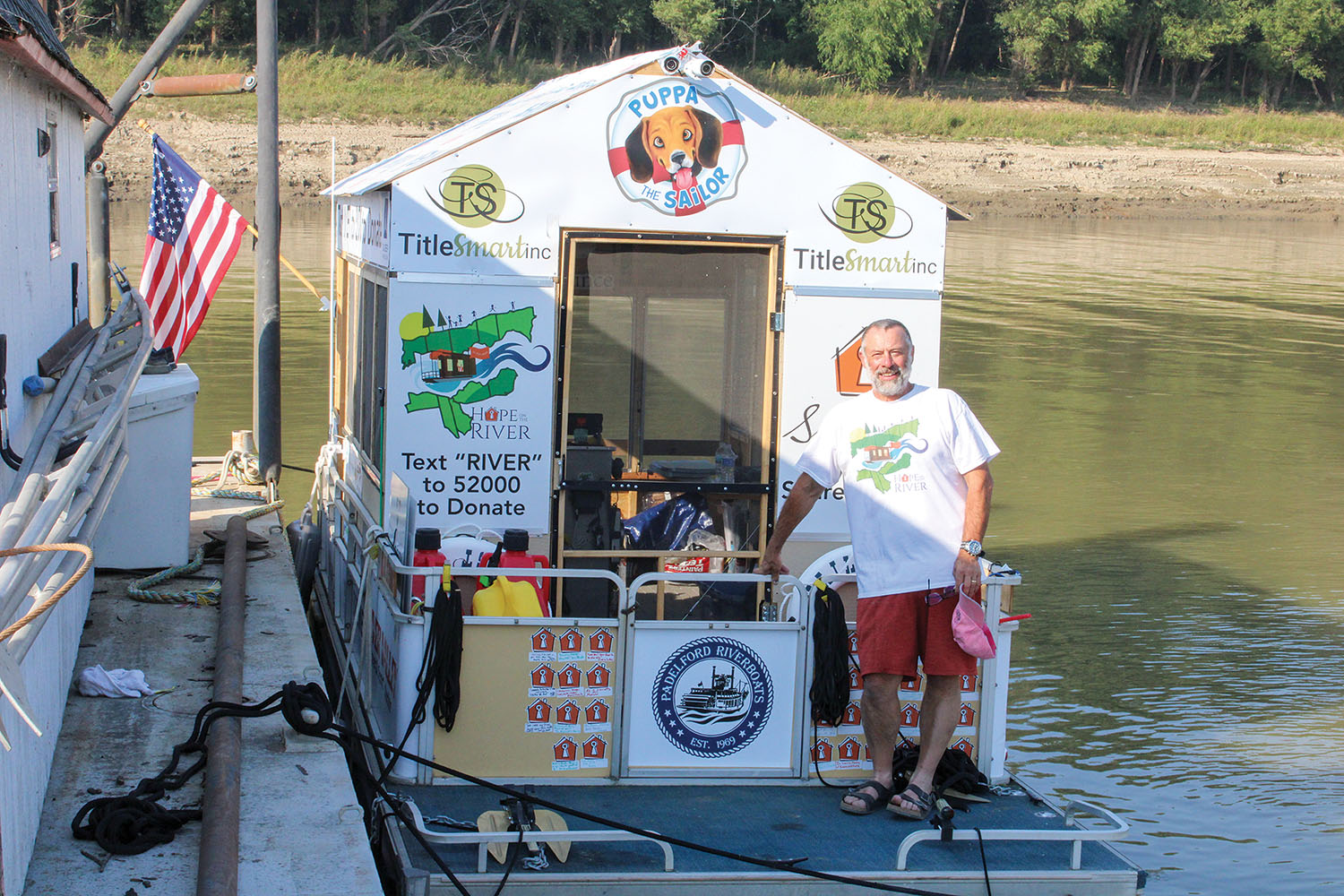 ‘Adventure Of A Lifetime’ Brings Hope Along With Unexpected Perils

Erich Mische chuckles a little when you ask him how his pontoon boat trip down the Mississippi River is going.

Stopping October 7 in Hickman, Ky., Mische, executive director of the not-for-profit organization Spare Key, said he has lost count of the times the “S.S. Hail Mary,” a 50-year-old boat equipped with a 50 hp. outboard motor and a painted shed from Home Depot, has been swamped with water, as well as the number of times it has nearly capsized.

He considers it a success, however, as it has brought awareness to the charity, which pays bills for people after they are seriously injured or diagnosed with a critical illness.

Mische is documenting his trip at hopeontheriver.com and hopes to raise $250,000. He is nearly halfway to his monetary goal, he said.

One of the first serious hurdles came on Lake Pepin, where he was caught in the wind for hours and swamped both the main and a small auxiliary “kicker” motor, both of which immediately stopped working. He then accidentally anchored in the river channel, not recognizing the danger. Passersby towed him to the marina he had planned to reach, and also pointed out a leak in the aft of the starboard pontoon. The opening to drain the leak was itself underwater and inaccessible, but a friend and riverboat captain, Capt. Gus Gaspardo with Padelford Riverboats in St. Paul, helped him devise a new system that includes a garden hose attachment, allowing him to pump out water while underway. Gaspardo also helped Mische navigate the busy St. Louis harbor and showed Mische how to safely tie up to the shore overnight if he needs to do so.

Traveling from Cairo, Ill., to Hickman turned out to be the leg of the trip that got Mische’s heart racing the most. After traveling from Cape Girardeau, Mo., earlier in the day October 6, Mische and his brother Karl, who is riding with him for part of the journey, decided to go on to Hickman, thinking it was only 17 miles.

“The current sped up so fast,” Mische said. “There were multiple whirlpools in the river, and as I tried not to get caught up in that churn, I nearly got crosswise with a tow.”

In hindsight, he said, he should have pulled out of the channel and not tried to keep going, but he was thinking about how many more miles they still had to travel before dark. Instead, he allowed what he thought was enough room for a port-to-port pass of the tow but found the rolling waves from the towboat and barges felt like being on the ocean.

Still, he said, the trip has been a good one.

“I’ve had far more positives than negatives, and people on the river, especially the people who run these tows and push these barges, could not possibly have been more helpful,” he said.

Along with raising awareness of the charity and its mission and funding that has been at times difficult to find during a global pandemic, Mische said what the trip mainly is about for him has been hope, something he is glad to share.

“I’m trying to give people hope,” he said, saying that people need to be able to see and meet others who care about each other and about this country in what has been a difficult year for many.

Depending largely on weather conditions, Mische hopes to conclude his trip about October 22 in Baton Rouge, La., where he will hand-deliver paperwork to the appropriate state offices to officially recognize Spare Key as operational in Louisiana, its 50th state.

Caption for photo: Erich Mische stands on the deck of his S.S. Hail Mary on October 7 in Hickman, Ky. He is traveling by pontoon boat down the Mississippi River to raise awareness for Spare Key, the non-profit he heads that provides help for bills after serious injuries and critical illnesses. (photo courtesy of Hope On The River)