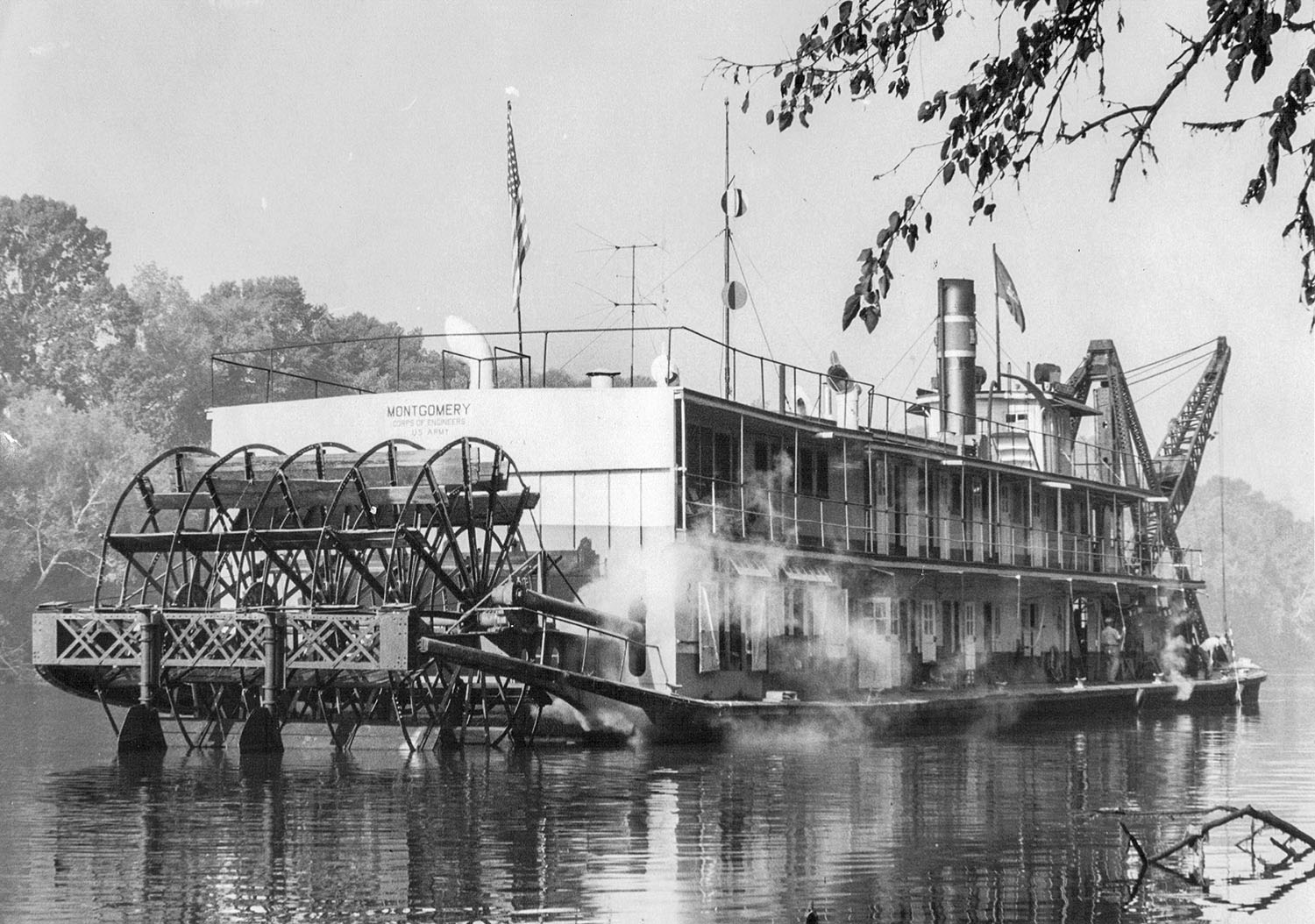 Reportedly one of the hardest-working riverboats in the Southeast, the extant snagboat Montgomery was constructed for the U.S. Army Corp of Engineers by the Charleston Dry Dock & Machine Company at Charleston, S.C., in 1926.

The vessel was built on a steel hull that measured 156 feet in length by 34 feet in width, with a depth of 6 feet. A single Scotch marine boiler supplied steam (210 psi.) to engines having 14-inch cylinders with a 6-foot stroke; the machinery was rated at 325 hp. The sternwheel is 18 feet in diameter and 20 feet in width, with 14 wooden bucket planks and steel pitmans.

Beginning service on the Coosa and Alabama rivers, the single-stack boat was based at Montgomery, Ala., until 1933, when that district was merged with the Mobile District. The Montgomery’s new home port then became Tuscaloosa, although the vessel continued to work on the Black Warrior and Tombigbee rivers until 1959, when it was transferred to Panama City, Fla.

The Montgomery assisted in raising the remains of the Confederate gunboat Chattahoochee from the Chattahoochee River in November 1964. The relics are now exhibited at the Port Columbus National Civil War Naval Museum at Columbus, Ga.

The sternwheeler pulled snags on the Apalachicola, Chattahoochee and Flint rivers for the remainder of its career; the home port was changed to White City, Fla., in 1979.

When the Corps of Engineers retired the venerable Montgomery on November 8, 1982, it was one of only two snagboats remaining in the United States. In 1984, the Mobile District awarded a contract for extensive restoration of the riverboat. The work included replacement of worn materials with new, sandblasting the hull and coating it with five layers of paint and the draining and cleaning of the diesel fuel bunkers. During the summer of 1983, the sternwheeler was taken, under its own steam, to New Orleans and up the Mississippi River to St. Francisville, La; the steamboat was painted and modified for use in the filming of the movie Louisiana, starring Margot Kidder. By 1985 the Montgomery was permanently moored as a museum near the Tom Bevill Lock & Dam on the Tennessee-Tombigbee Waterway at Pickensville, Ala.

At the beginning of the 21st century, the Corps was faced with the daunting, but inevitable, fact that exposure to the elements was causing rapid deterioration of the riverboat. One option considered was that the vessel would be scrapped. After much deliberation, a decision was made to remove the snagboat from the water. On October 2, 2003, the Montgomery was carefully lifted on a specially designed cradle and gently placed into a dry mooring basin adjacent to the Tom Bevill Visitor Center, which replicates a beautiful antebellum mansion. In late 2003, a comprehensive maintenance plan was developed for a complete restoration project for the snagboat. The extensive work, which commenced in 2004, included replacement of rotted decking, painting of all exterior and interior surfaces, replacement of the pilothouse windows and numerous other tasks. A new plan for visitors was implemented that included updated interpretive panels aboard the boat for self-guided tours.

A grand reopening and restoration celebration for the Montgomery was held on October 28, 2004. The ceremonies included a ribbon cutting by Capt. Cleve Fleming, former master of the steamboat.

The U.S. Snagboat Montgomery is designated a National Historic Landmark. Further information concerning the 95-year-old riverboat can be obtained from www.encyclopediaofalabama.org.

Caption for photo: The Montgomery at work clearing snags on waterways of the South. (Keith Norrington collection)