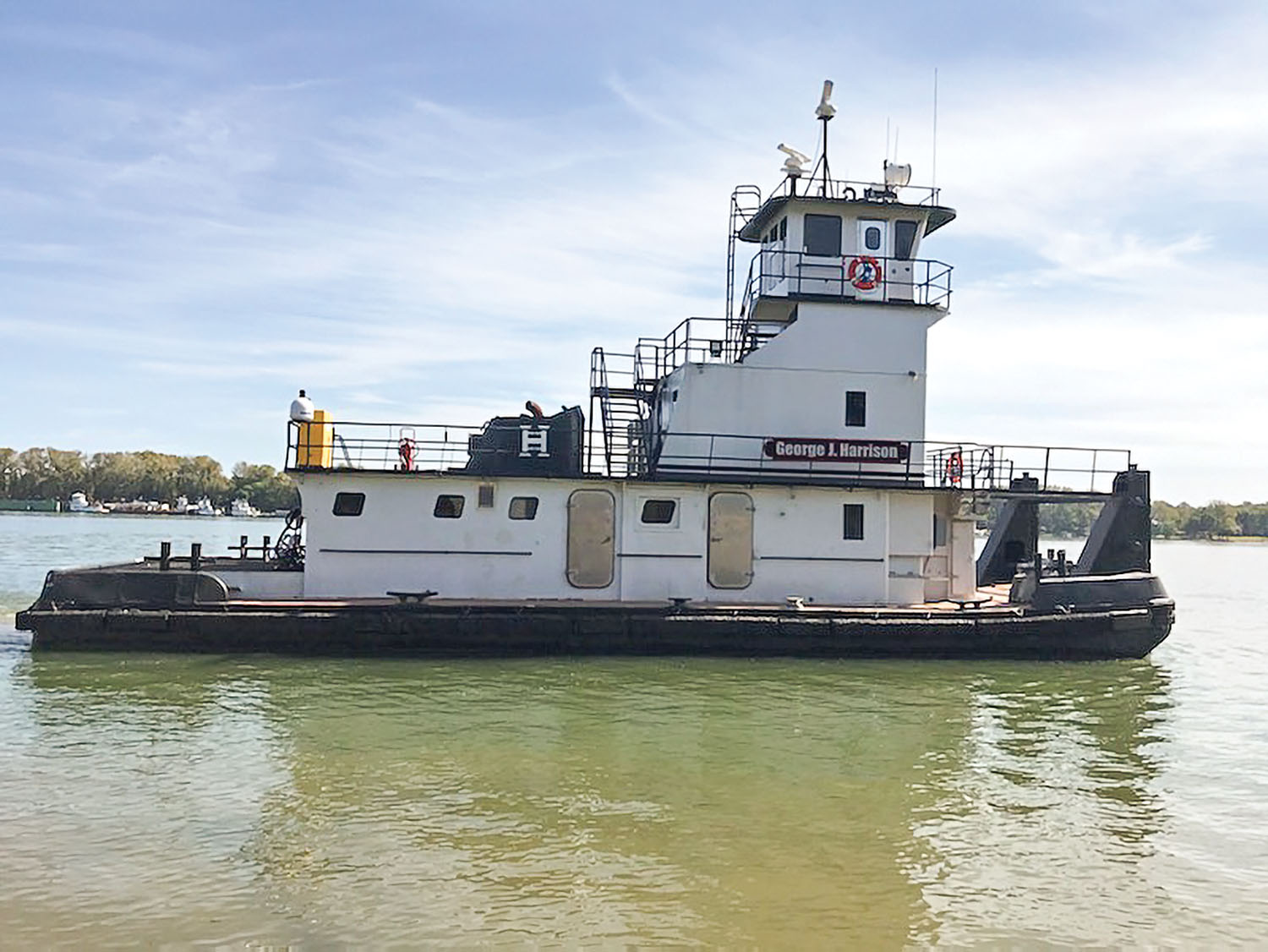 Bellaire Harbor Service is celebrating its 15th anniversary with the delivery of boats named to celebrate the Harrison family’s past and look toward its future.

President and owner Bob Harrison and his wife, Julia, bought the company, based in Bellaire, Ohio, in 2005 from the Ohio River Salvage Company. Bellaire Harbor Service is located at Ohio River Mile 92. The company owns 16 boats and provides fleeting service for 275 barges in the Pike Island and Hannibal pools. Along with marine transportation and harbor/fleeting services, Bellaire provides marine repair and cleaning, stevedore/terminal operations and portable barge unloading.

“We’re pretty much a one-stop shop for everything that needs to be done,” Harrison said.

Capt. Ron Harrison, port captain and Subchapter M coordinator, is Bob’s brother and works for him. Both represent the fourth generation of their river family. Their great grandfather, Llewellyn “Babe” Harrison, worked at a shipyard on Eastern Avenue, in Cincinnati, Ohio, where they used to build packet boats, Harrison said.

“One of the ones he worked on was the Queen City,” Harrison said. “He got into the ferry boat business while working on the shipyard. If the wind was blowing, they sailed across. If it wasn’t, they rowed across.”

Eventually, he built a gas-powered ferry. After the “Great Ice” of the winter of 1917-18, the ferry went out of business, but it provided the opportunity to begin a canoe harbor business.

Eventually, Harrison said, his grandfather, George Harrison Sr., took the business over. He spent time working on barges as well before buying the steamer Chris Greene from Greene Line Steamers in 1950. He made it into a landing boat, operating it as a bar and restaurant, although it burned to the waterline in the late 1960s. In 1975, Harrison Boat Harbor was bought out at that location by an urban renewal group as part of the effort to surround the city of Dayton, Ky., with a floodwall.

The Harrison family moved to Melbourne, Ky., where Bob and Ron’s father, George Harrison Jr., used to sell pleasure boats, operating the boat harbor there. He passed in 1985, and his sons sold off the docks and closed it for good in 1994, concentrating on the commercial side of the business instead.

Bob Harrison began working in towboat and barge unloading in 1987, operating  Harrison Inc. The company was bought out by Greater Cincinnati Marine Service in 2000, but both Bob and Ron continued to work for the new company until forming Bellaire Harbor Service.

“We started out with five boats in 2005, and now we’re up to 16,” Harrison said. He also recalled they only had one material handler to unload barges when they started, and now they are up to nine. They now unload roughly 1,000 barges annually in total at all facilities.

Harrison attributes much of the business’ success to scrutinizing every opportunity that comes their way before moving forward only with the ones that are the best fit.

Such is the case with the recent acquisition of two boats.

When Harrison was a teenager, he worked as a deckhand on Tucker Marine’s twin-screw, 350 hp. mv. Hawk, later renamed the Aly Savannah.

“That’s the one that started it all” for him, he said.

In March, Harrison came across the boat in Larose, La., where it was now owned by a construction company. He bought it as part of a package deal with a barge he was interested in and now expects it to arrive within the next month or so. He plans to restore its original name, rehab it and use it around the harbor.

A more major vessel purchase is due to arrive in the next few weeks. The recently renamed mv. George J. Harrison honors Harrison’s 16-year-old son. The teenager himself is named for both his paternal grandfather, George Harrison Jr., and maternal grandfather, Joseph Carl.

The 1,200 hp. twin-screw towboat was originally the Accu 4, bought from Accu Marine Transportation in Daphne, Ala., a few years ago. Bellaire bought it five or six years ago and did some of the early rehab work before sending it to Marine Builders in Utica, Ind.

“We went in and completely redid the boat,” Harrison said.

Completed earlier this month, the George J. Harrison is Subchapter M inspected and certified. It is 70 feet by 23 feet by 9 feet with a 7-foot draft and a 28-foot-6-inch pilothouse eye level. The steel is one-half inch all over, including new, recessed cooler boxes. It has a 9,000-gallon fuel tank along with a new, stainless steel custom water tank holding 1,800 gallons.

Hull characteristics include a single-chine bottom and 2-foot transverse framing with paint and coatings from Sherwin Williams. Wearguard custom side fenders protect the hull.

The boat is powered by twin, CAT C-18 main engines rated at 600 hp. each. The engines are mated to Twin Disc MGX 516 reduction gears that turn 60-inch-diameter, 56-inch-pitch propellers at a ratio of 5.01:1. It has Twin Disc EC-300 throttle controls.

There are three berths for crew quarters, with double bunks, along with two full heads with stainless steel showers. The laundry room includes a full-size washer and dryer. The boat features Tuflex flooring and FRP and paneled walls with oak trim along with acoustical drop ceilings and sound abatement insulation. Air conditioning and heat is from a ductless split system with supplemental wall heaters. The galley is fully equipped with a refrigerator and stove cooktop with oven, microwave and dishwasher.

Harrison said Bellaire plans to use the George J. Harrison in the harbor as well as for short line-haul work.