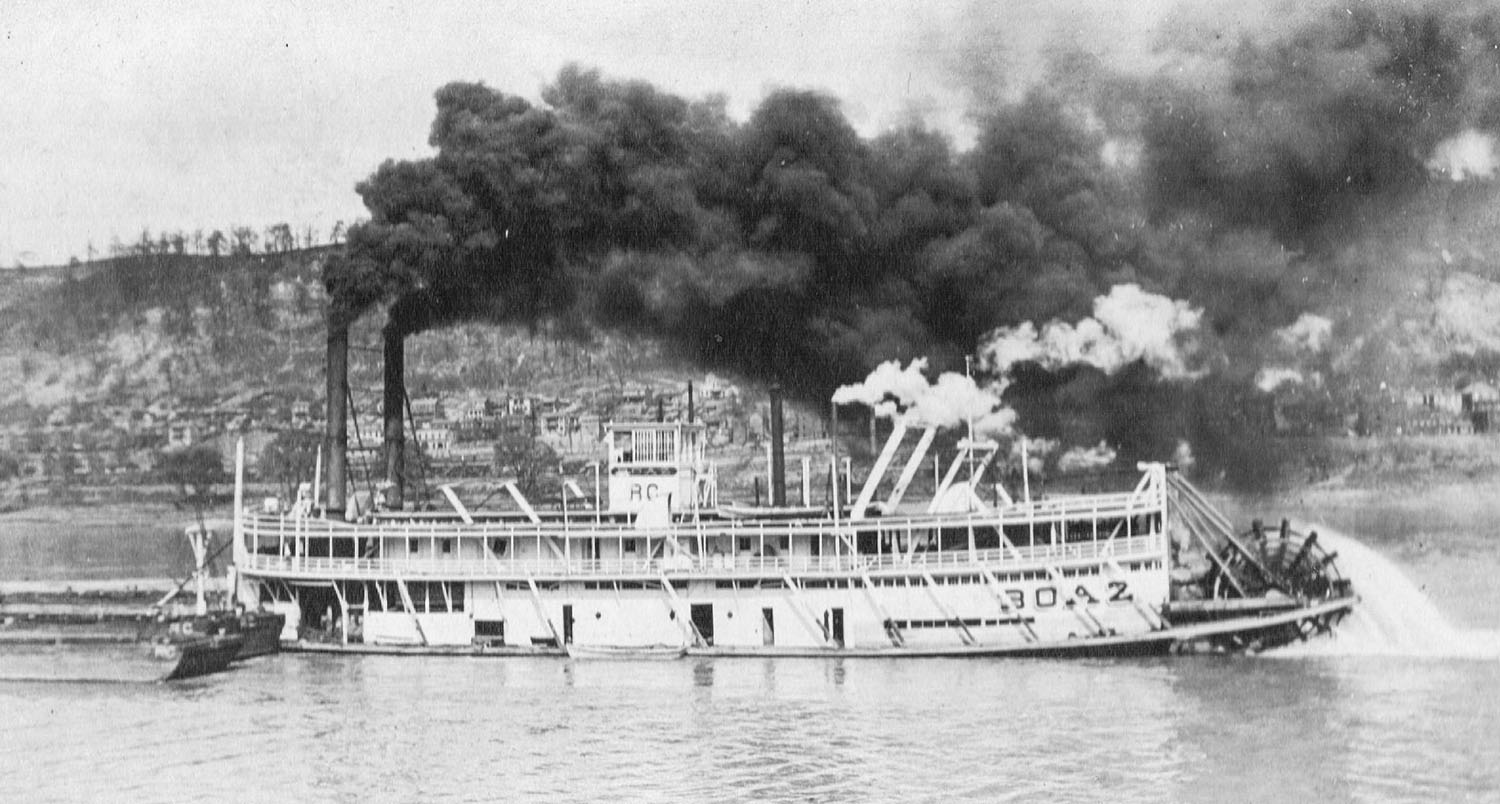 In the glory days of the big steam towboats, one of the best-known ones was the Boaz. Built in 1882, the wooden hull measured 193 feet in length by 44 feet in width and was constructed at Sewickley, Pa., with the remainder of the vessel being completed at Pittsburgh. The engines were recycled from a previous towboat (built in 1867) of the same name and had 28-inch cylinders with an 8-foot stroke.

Capt. William Smith was the majority share owner of the boat, with Capt. Tom Fawcett owning the balance. By 1895, the steamboat was owned by the Crescent Coal Company, at which time a large crescent moon was suspended between the smokestacks.

In 1900, the ownership changed to the Combine. Some of the masters of the riverboat were Capt. William Hoge, Capt. Peter Boli, Capt. Cal Blazier and Capt. Frank Gould, who served from 1902 until the boat was retired in 1916.

The Boaz was a powerful sternwheeler and was rated at 1,433 indicated horsepower when a 300 hp. boat was considered adequate for most towing at the time. The Boaz usually departed Pittsburgh with tows of some 30 barges and coalboats, most of which were delivered to Pumpkin Patch, a landing just upriver from the Howard Shipyard at Jeffersonville, Ind.

The towboat would usually take eight coalboats at a time down through the Louisville & Portland Canal until a tow of 45 to 50 pieces had been assembled at West Louisville. During extreme high water periods, when the canal was closed, the Boaz was known to move as many as 40 pieces over the falls.

Like most all steamboats, the Boaz had its share of accidents and adventures. The boat had a reputation for losing coal and once spilled an entire tow of 14 loads above Hawesville, Ky., in early 1895. In January 1901, the Boaz was on the Lower Mississippi when it grounded between Laconia and Homichitta with 42 pieces; it remained high and dry for some time before a rise in the river released both the boat and tow. In March 1908, Capt. Gould got caught in shut-out fog at Ashland, Ky., and lost a tow on the pier of a bridge then under construction between Ashland and Ironton, Ohio. A tale circulated amongst rivermen that the Boaz once departed Pittsburgh with a full tow and lost nearly all of it, here and there, before reaching Cincinnati; the story goes that the boat returned to Pittsburgh to replenish its tow.

The Boaz was retired in 1916 and was relegated to a boneyard until 1925 when it was dismantled at Brown’s Station on the Monongahela River. Judge Matthew Merriman, of Columbus, Ohio, sent a request to the wreckers asking for two glass doorknobs, as mementoes of his days as a cabin boy during the time his father served as steward on the boat.

In the autumn of 1938, a large River Exposition was set up in the old music hall near the Point at Pittsburgh. During its three-week run, more than 20,000 people visited the extensive displays of steamboat models, artifacts and riverboat memorabilia. Capt. Fred Way (1901–1992) was an organizer of the event and recalled that one of the relics on exhibit was the big pilotwheel from the Boaz. Way was present when Capt. Frank Gould (longtime master of the boat) was brought to the exhibition as an honored guest. Then quite elderly and totally blind, the captain wept as his hands were guided to the worn spokes of the pilotwheel.