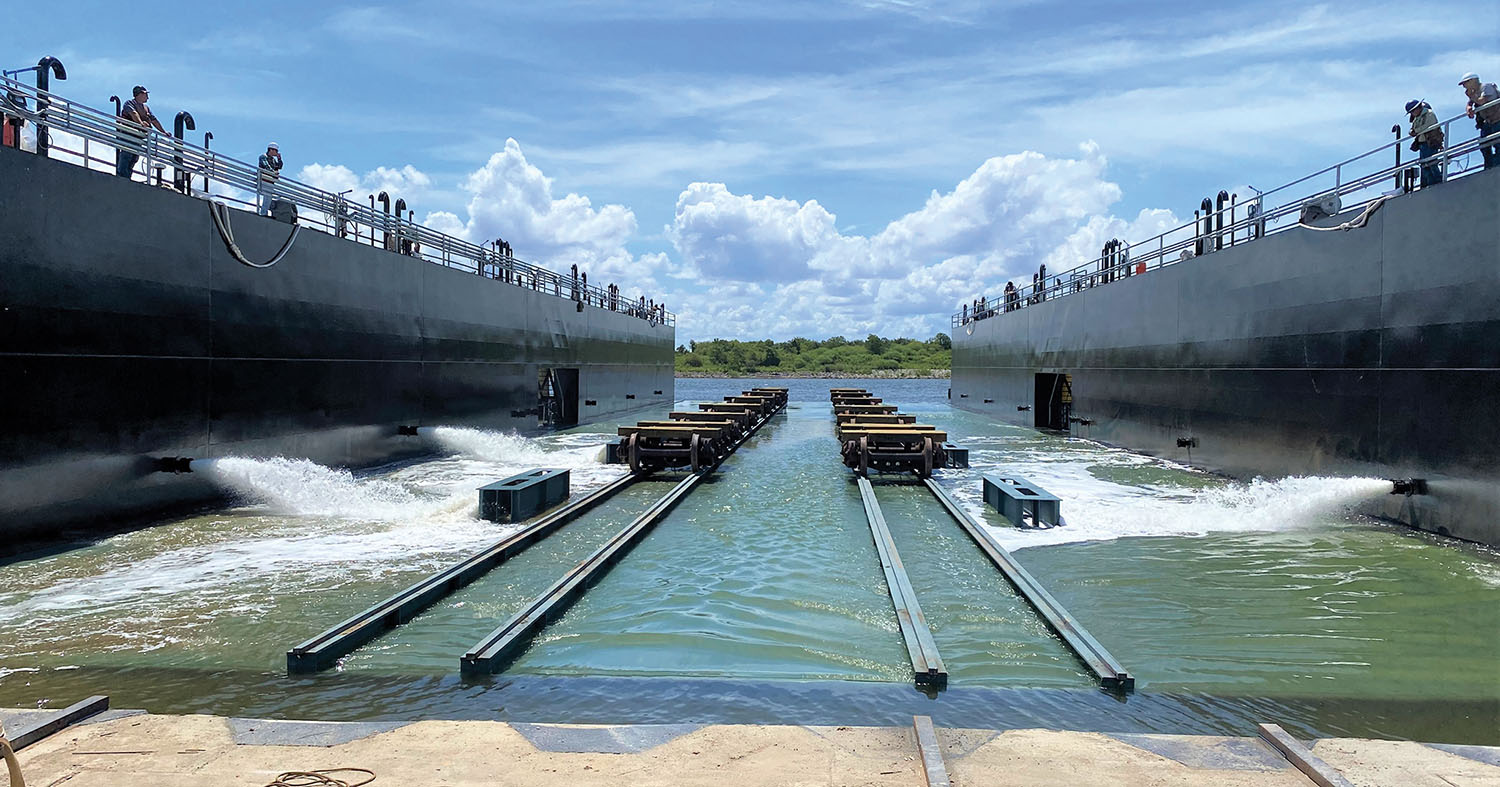 Vessel Repair, a Port Arthur, Texas-based shipyard specializing in the new construction and repair of towboats and barges, has added a new 280-foot drydock and a two-barge transfer system to its operations. The shipyard is located along the Sabine Neches Ship Channel near where the Gulf Intracoastal Waterway crosses from Texas into Louisiana.

The first job for the drydock, which has a lifting capacity of between 3,000 and 3,500 tons, was to dock and transfer to land a 30,000-barrel barge belonging to Golding Barge Line. Coincidentally, Golding was also the first customer to build a new towboat at Vessel Repair.

The drydock was made possible, in part, by a $1.3 million Small Shipyard Grant from the U.S. Department of Transportation’s Maritime Administration. West Gulf Shipyard in Galveston, Texas, built the drydock, which features some innovations to boost efficiencies, functionality, safety and longevity. The drydock has inclined stairways built into each wing wall rather than external vertical ladders, a feature that offers safety benefits while also improving the stability of the drydock.

Vessel Repair also enhanced the structural members at the base of the drydock to improve the strength and stability of where the drydock meets the shipyard’s rail transfer system. Vessel Repair moves barges in need of repair from the canal ashore via a series of rails.

Also, the entire drydock was built to a minimum steel thickness of three-eighths of an inch to, hopefully, extend its life to 50 years or more.

Other features of the drydock include wing walls that extend to within seven feet of each end and that feature a large opening amidships. Both features boost the dock’s stability. The control console is located at the shoreside of the dock, to better monitor and adjust the transfer of barges and vessels to shore.

With the new drydock coming online, the Vessel Repair team knew the yard would need crane services for the dock and the 700-foot space where it transfers barges to shore for servicing. Rather than a tower crane or a drag line, both of which would bring limitations, the team opted for a rolling gantry crane. The new gantry crane, which measures 72 feet wide and 42.5 feet tall, is able to service barges on shore and roll onto the drydock and has a maximum lift of 20 tons.

A third new addition at Vessel Repair is a rolling blast and paint building that measures 70 feet wide and 80 feet long. The structural galvanized building is equipped with two 30-ton blast pots and a pair of high-pressure air compressors capable of covering 750 cubic feet per minute.

The shipyard already has an enclosed blast and paint facility capable of servicing 10,000-barrel tank barges. The new rolling facility, open on two ends, yet equipped with curtains to contain blast media and reduce overspray, offers many of the advantages of an enclosed building, while also adding some multipurpose functionality. When not blasting and painting, for instance, the building can be used to give repair personnel shelter while working on barges. In cold weather, yard personnel can allow the sun to warm up a section of steel on a barge, then roll the blast and paint booth into place to apply a new coating.

Adding the three new components—the drydock, rolling gantry crane and the blast and paint booth—required a substantial amount of dredging and installation of all-new bulkhead. The entire barge transfer area was also resurfaced with concrete. The shipyard also added new utilities throughout the area, with both three-phase and single-phase electricity.

Company officials stressed the design and execution of the entire expansion project, the largest in Vessel Repair’s 36-year history, was a collaborative effort, with input from the shipyard’s entire team.